In my June 27th CFHS post, I talked about Fred Harvey’s establishment of the Southwestern Indian Detours in 1926. He commissioned the Harveycars known as Road Pullmans to transport train passengers on the thrill of a lifetime. He provided the service, the means, and then the reward — Harvey Detour Couriers and Drivers.

The Couriers made the southwest come alive for adventurous train travelers and independent motorists. They were considered the official hostesses of the Southwest. They sold the Southwest to America. The Detour Drivers kept the Harveycars on the road and on time. The Couriers came to be called Indian maids, the Drivers were Cowboys, and Detourists were referred to as Dudes.

Harveycars were painted "Tesuque" brown with an official Thunderbird insignia on the door. The color of the Packards was named in honor of one of the Tesuque pueblos they visited. 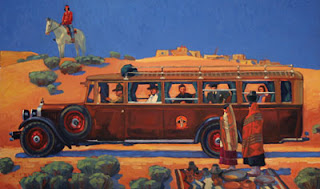 Automobile travel was blossoming and the Santa Fe Railroad offered brochures that gave explicit directions for independent drivers to experience the route of the guided tours.

Before reliable direction signs, mileage markers, and road maps, many motorists traveled with the Official Automobile Blue Book, published by a Chicago firm. Nowadays, we think of the “Blue Book” as the Kelly Blue Book on new and used car prices and value.

The original Automobile Blue Book was a road guide for motoring travellers in the United States and Canada. Charles Howard Gillette, a Hartford businessman and automobile enthusiast, initiated the series in 1901. By the 1910s, it became "the standard publication" of its type. 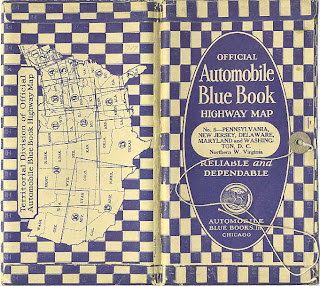 If you traveled by car into the interior of Mexico in the 1980s, you’re familiar with the Sanborn Travelogs. Before GPS, Google maps, and WiFi, these Travelogs charted mile by mile the route you chose. The descriptions were accurate right down to the “turn left at the second fire tree” for a restaurant, hotel, gas station, or selected private villas that offered hospitality to American travelers.

It was 1912 before the Western States (Mississippi River to Pacific Coast) were included in the Blue Book Tour Handbooks. It was 1920 before specific states in the West and Southwest were included. Volume 7 helped navigate Colorado, Nebraska, Kansas, Texas, New Mexico, Oklahoma, Arkansas & Louisiana, as well as the Extension Roots into Iowa, Missouri, Tennessee, Mississippi, Wyoming, Idaho, Utah and Arizona.

In 1936, Victor H. Green, a Harlem-based postal worker, published The Negro Motorist Green Book. This directory included hotels, gas stations, restaurants, and selected private homes that offered hospitality to black travelers. In 1964, the Civil Rights Act was passed and this publication was no longer needed. Read more about the Green Book at http://www.atlantamagazine.com/history/Story.aspx?id=1319752. 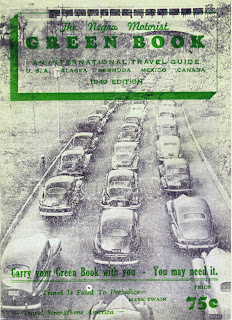 Travelers availing themselves to the Southwest Indian Detour services were entitled to many perks not afforded to independent tourists. Detourists weren’t pestered for baksheesh (alms, tips) or required to tip, pay baggage checking fees, or admission fees. The Detour trips could be combined with horseback riding, walking tours, and wagon trips to more remote areas.

The Couriers were a walking information desk. Their knowledge of local artisans and crafts, excavated Indian ruins, historic churches was standard fare.

Their familiarity with places like the turquoise mines where Tiffany bought all of their raw stones for many years, the house where Governor Lew Wallace wrote part of ‘Ben Hur’, and the ancient pictographs scratched on rocks kept the travelers enthralled.

Each Courier had to know every interesting site in her territory, facts and traditions of every ancient or prehistoric pueblo, every Mexican village, every natural wonder and its historical significance. Can you imagine knowing every trail and its associated archaeological facts? 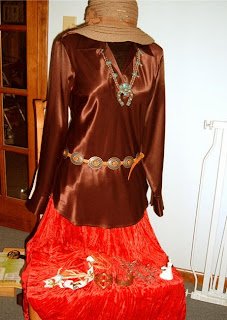 Now before you think the Couriers were just beautiful fountains of knowledge, they also had to man the pry poles used to free the Harveycars from sand and mud, handle a tire jack, and lug a spare tire. They climbed up and down the ladders at the ancient cliff dwellings multiple times daily. Several women who lived an in-town distance from the La Fonda Hotel, their Santa Fe training headquarters, used roller skates to get to roll call on time.


Drivers were outfitted in English riding boots and breeches, a colorful cowboy shirt, a silk neckerchief, and a Tom Mix-size ten-gallon hat. These dashing, courageous men had to be experts in art of double clutching, all auto repairs, have a sense of humor, and handle testy tourists. When the rains came, it wasn't uncommon for them to rebuild the banks of a flooded arroyos after the water receded in order for the cars to make it across and back.

They are credited with coining the word Dudes for the Detourists, who never seemed to mind as dude ranches were synonymous with the wealthy vacation life. The drivers were all native of the region, although their backgrounds were varied.
Couriers and Drivers hosted and chauffeured royalty from every nation, including Prince and Princess Ferdinand from Germany, Prince and Princess Fuisel of India, and others from Baroda, Alba, and Greece. Sir Harry Lauder composed a song up in Pecos canyon.

Their legacy lives on in the friendships and family connections they made during their service and long after they retired, and into the next generation. 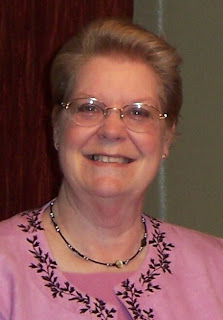 Lin grew up, graduated from Lovington High School, and married Jerry, 47 years ago in Lovington, New Mexico. The first book in her new Voices in the Desert series, Treasures Among the Ruins, is set in 1926 and introduces Cornelia Miller and her adventures as a Southwestern Indian Detour Courier. The other four books span the years of the Indian Detour Couriers from 1926-1932.

Posted by Linda Farmer Harris at 12:38 AM