For my blog this month I'm going to write about Betty Zane. I had always thought of her as an Ohio heroine—or at least, that's what my foggy memory from fourth grade Ohio history study told me. But I'm always learning things from this Christian Fiction Historical Society blog, even when I'm the one writing the blog. :)  As I researched for this blog, I learned that Betty Zane's heroism took place in West Virginia, not Ohio—and of course it wasn't West Virgina then, but the colony of Virginia.

Betty Zane was born in 1760, the daughter of one of three Zane brothers who moved to the new settlement of Wheeling on the Ohio River. This was an illegal move because this area had been reserved as a royal colony for the natives. It was a dangerous area with thick forests and hostile Indians. Betty was sent to Philadelphia to finishing school but returned to Wheeling in 1781. The British defeat at Yorktown took place that same year, but the war was not formally over yet on the frontier due to the Indians and Canadians.

On Sept. 10, 1782, Ft. Henry, of which Betty's brother Silas was the commander, was besieged by Wyandot and Delaware Indians, pro-British American loyalists and British Troops. Inside the fort, forty-seven civilians tried desperately to hold them off until their supply of gunpowder was exhausted. Her father was wounded and fell from the top of the fort right beside her. Her brother remembered he had left a keg of gunpowder back in the cabin, and Betty volunteered to go get it. "You have not one man to spare; I can't fight, but I can fetch gunpowder for the defense of the fort," she is quoted as having said. 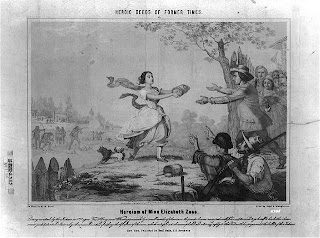 She ran to the cabin, some 60 yards outside the fort, much to the enemy's amazement, and after pouring the gunpowder into her outstretched apron, ran back to the fort. Realizing by now what she was doing, the British opened fire on her but she managed to reach the safety of the fort without being hit, though a bullet tore her dress. The British and their allies retreated two days later. Two other girls, Molly Scott and Lydia Boggs, also later claimed to have done the same, but Betty is generally given the credit, especially since a collateral descendent, the famous writer Zane Gray, wrote a novel about her in 1903. 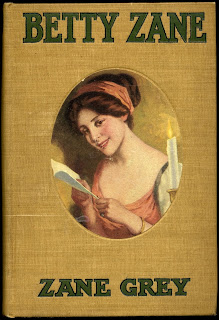 Betty later moved to Martin's Ferry, Ohio, which is perhaps why Ohio claims her as her own. She was married twice, but prior to being married had an out-of-wedlock baby whose father was compelled to deed land for the child. She was married to John McGloughlin and had five daughters, then married Jacob Clark and had two more children, a boy and a girl. She died on August 23, 1823, and is buried in Walnut Grove Cemetery in Martin's Ferry. There is a large monument there to honor her. 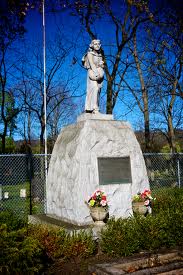 Now that you've read all the way to the end, I'll announce that it's my month to do a giveaway. I will once again be offering my latest book out from Love Inspired Historicals, HILL COUNTRY CATTLEMAN. However, if you're my winner and you have already read this book, when I contact you we can discuss which other of my books you might not have read and I will be happy to send you that one. J
Blessings, Laurie Kingery
Posted by Laurie Kingery at 1:00 AM