Foods From Our German Heritage

Several years ago I became interested in genealogy and discovered that both my paternal and maternal grandfathers were of German heritage. I should have suspected as much when I was younger as my maternal grandmother made sauerkraut from scratch and it created the most awful smell in the house. Half the time I went to a friend’s house for dinner. Of course it was always served with bratwurst.

However, she made a German Christmas Fruit Cake that I absolutely loved.

When I visited Fredericksburg, Texas, I discovered many dishes my grandmother made were of German origin, but we called them something else in our house, and most of them were much better than that sauerkraut. I learned more about foods like Gugelhupf, Spaetzle, Lebkuchen, German meat balls and dark rye bread. My maternal grandmother, Mimi, made these but I knew them simply as bread, dumplings, ginger molasses cookies, and black bread.

Although Germany and Austria are two distinct countries, the early immigrants from either were called Germans by their neighbors here in America. The first Germans to arrive were Mennonites brought here by William Penn for his colony. Not far behind them came the Moravians and Pietists and other religious sects. By 1776 Pennsylvania was nearly half German and Austrian. They established settlements that became what we know today as the Pennsylvania Dutch.

By 1830, Germans had begun to cross over to America by the thousands. Between 1830 and 1930 about six million immigrated to America. My great-great grandfathers were among them in the early 19th century.
My latest release, Love Stays True, is loosely based on the love story of my great-grandfather and great-grandmother in Louisiana. His father came to Louisiana from Pennsylvania in the early 19th century. The German name was Weissermann which was translated to Whiteman for easier spelling.

When I visited in Germany in 1996, I went to Munich, Augsburg, and Oberammergau. We ate at a Rathskeller which is a restaurant or bar. I found the foods there were absolutely delicious, especially the desserts.

Dishes like apple strudel shown on the left, wiener schnitzel, German potato salad, and springerle were embraced by those who lived near or in the German colonies.

The Germans loved their sweets. The Sacher Torte, Dobos Torte, and the Linzer Torte are prime examples as well as Black Forest Cake and Pfeffernuesse cookies shown below. 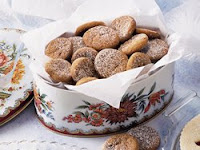 In the Pennsylvania Dutch region and in areas where we still have communities with a rich German heritage, we will find foods made from original recipes handed down through the generations. I found two of Mimi’s and I share the fruit cake one with you today. It is much more moist and more like cake than traditional fruit cake.

Martha started late in life but now has multiple novels and novellas in print. She lives in Houston, Texas with her husband and is active in their church where she sings in the choir and teaches a class on Sundays and he serves as a deacon. She is a member of ACFW, The Woodlands Chapter of ACFW: WOTS and IWA! She is Co-Director and a regular member of the faculty for the Texas Christian Writers Conference held in Houston each August.