In her June 26th CFHS post, Schoolyard Games, Winnie Griggs posed an intriguing question, “Was there a favorite game you remember playing during recess?” She mentioned Hop-Scotch. Wow - that brought back lots of memories. There is something irresistible about a chalk diagram on a sidewalk. Children and adults alike will hop across the board and go on their way with a chuckle and a smile. But, how many of them actually know the rules.

In the 1864 edition of the American Boys Book of Sports and Games (Dick & Fitzgerald, New York), the rules required that the player hop on one foot and kick an oyster-shell or small flat stone from one compartment to the other, without putting the lifted foot on the ground and without allowing the shell/stone to land on a line.

The diagram consisted of thirteen compartments, twelve were numbered, and the last one had a large “P” standing for plum-pudding. No explanation was given for why the plum-pudding designation.

One method to decide who went first was for each player to throw a stone onto the diagram and the one nearest to the P played first.

The winner would stand on the place marked with the star and throw his shell into the No. 1 box; he would hop into the space and kick the shell back to the star.

I don’t know about you, but I’m tired already! I found it interesting that this was a game played primarily by boys. I’ve always thought of it as a girls’ game.

The player must resume hopping before he can kick No. 7’s shell back to the star, following the kicking sequence. He passes through the beds 8,9,10, and 11 in the same pattern as 1-5, until he reaches the P. He can now rest again. He is then required to place his shell on P and while standing on one foot, kick the shell from P to the star in one kick.

A player loses his “innings” if he throws his shell into the wrong compartment, if his shell or his foot rests on a line; or he kicks the shell out of the diagram.

This made me think of the ways we chose teams or the person to be “it.” No matter the group, everyone seemed to know the Eeny, Meeny, Miny, Moe chant. This counting rhyme has existed in various forms since well before 1820 and common in many languages with similar-sounding nonsense syllables. I think locality had some influence on the rhyme also. Some chants caught a tiger by the toe, some caught a monkey or a chicken, others caught a teacher (hmmm). We caught a cowboy and made him pay fifty dollars every day instead of letting him go.

There was always some kid who wasn’t satisfied with the person pointed to on the last moe so he had to add “My mother told me to pick the very best one, and that is Y-O-U.”

Lo, and behold, the boys played a game as early as 1864 that may have originated that measurement phrase. To play, mark a long line on the ground as a starting point. Ten yards from this point make another mark for the “spring.” Players line up along the starting point line and in succession run to the spring line. From the spring line, he makes first a hop on one leg, then a long step, then a long jump. He holds his ground until every player springs. The winner is the one who covers the most ground. This is now an typical track and field event plus a variation of it is one of the Olympic Games competitions. 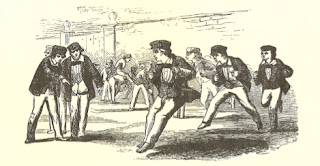 I never thought of boys needing to be taught to jump, but the 1864 manual encourages them to jump upward, downward, backward, and over long distances. They are to practice these moves in earnest. 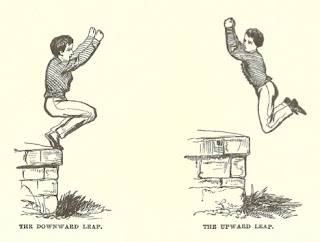 Now, that you’re tired and want to play indoors, “Twirling the Plate” and "Cupid’s Coming” will fit the bill. These are particularly good for cooling down after a vigorous romp.

Twirling the Plate was new to me, but lots of fun when I tried it with some visiting children. I used a plastic “charger” plate; set it on its edge and gave it a spin. I called the name of one of the children and she had to catch it before it quit spinning or pay a forfeit. We used a dime’s worth of pennies as the penny-forfeit. The forfeit went to the person who twirled the plate. The person called on now spins the plate and calls on someone to catch it. It isn’t as easy as it sounds.

The girls really liked Cupid’s Coming. Yes, we Eeny, meeny, miny, moe’d to choose the person to start the game. She chose a letter for a word that ended in “ing.” For example, R was chosen. The IT girl said to the person next to her, “Cupid’s coming.” The person responded, “How is he coming?” Miss IT replied “Racing.” The person now tells the girl on her opposite side, “Cupid’s coming.” The third person asked, “How?” The response was “Rudely.” The question and response goes around the circle until the “R” (or chosen letter) and its “ing” are exhausted. The penny-forfeit was used when someone couldn’t answer with an “ing” word.

Indoors or outdoors, kids need to be active and interact with each other. Maybe some of these old games need to be refreshed in our backyards and family outings. Have you or your family invented any games to play or modified an old game?

Lin grew up in Lovington, New Mexico and married Jerry 47 years ago this month. When she isn't researching the many fascinating things in and around Chimney Rock, Colorado, where they now live and ranch, she is working on her new series Voices in the Desert. The first book, Treasures Among the Ruins, is set in 1926 and introduces Cornelia Miller and her adventures as a Southwestern Indian Detour Courier. The other four books span the years 1928-1932.