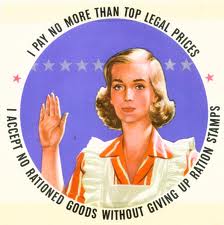 The bombing of Pearl Harbor not only brought the United States into World War II, it created a wave of patriotism not since experienced. The day after the “day of infamy,” millions of American men lined up outside recruiting offices to sign up for the military. 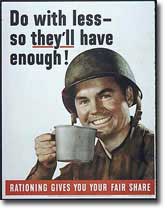 But citizens at home wanted to contribute to the war effort as well, and eagerly sought ways to help “our boys overseas.” Shortages of materials soon appeared as factories shifted production from consumer goods to military supplies. People learned to do without or make personal sacrifices of goods, knowing that soldiers were supplied first.


So when the government issued “War Ration Book One” in May 1942, most citizens willingly complied and adjusted their lives accordingly. Every man, woman and child in the U.S. was issued a book with rationing stamps through the schools. Sugar was the first food item rationed, followed by coffee. “War Ration Book Two” came out in February 1943, limiting amounts of meats, cheese and processed foods. 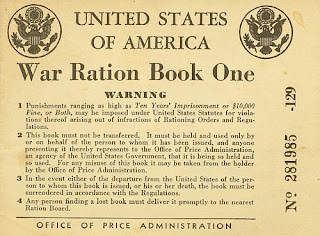 However, with dwindling supplies at the grocery stores, the food was sold on a first-come, first-served basis, resulting in long lines waiting for stores to open. Once the store’s inventory was sold, there was no more to buy regardless of possessing a stamp or not. In some communities, this dilemma fostered a barter system. The person lucky enough to get their allotted amount of sugar, for example, soon had neighbors at their door, offering a variety of goods in exchange.


The first non-food item to be restricted was rubber, since 90 per cent of it came from areas overseas where the Japanese had taken control. Rubber was essential for tires for all military vehicles. On the home front, that meant rubber elastic was no longer available, so clothes such as underwear were made with drawstrings instead. 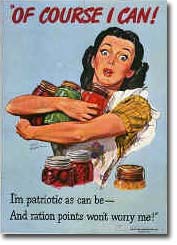 As a result of American oil tankers being sunk by German submarines, gasoline became scarce. Since the government needed to cut down on rubber use as well, they issued gas ration tickets. Many gas stations closed for lack of supply, and those open often had lines 300 cars long. People were known to follow tanker trucks to their destination to get gas. Consequently, many cars ran out of gas and were abandoned on the roads.


The other precious commodity to be restricted was metal. No longer were consumer goods made of metal available. People began to reuse what they already had, such as metal zippers, often removing them from old clothes to reuse in new, homemade clothes.


The habit of saving and reusing stayed with the people of that era even after the war ended. Later generations would find boxes of buttons, safety pins, and zippers and wonder why Granny saved them.


Did you have a family member from the WWII era who saved something? Did you hear stories about rationing?


Leave a comment for a chance to win a copy of Chicken Soup for the Soul – Devotional Stories for Wives.