It's great to be back with you all today. For the past several months, I've been telling you about the United

States Life-Saving Service, which ran from 1848 until 1915 for the purpose of rescuing sailors and passengers stranded on wrecked vessels. Modern technology and conveniences like radios and helicopters and speed boats that are used by the current Coast Guard were not available in the late nineteenth and early twentieth centuries, so the Life-Savers relied on special equipment, rigorous training, and manual labor to preform their duties.

Today I want to tell you about the real life rescue of the L.C. Waldo, which occurred only a hundred miles from where I live.

In November of 1913, the Great Lakes Region experienced the strongest storm (or series of storms) ever on record. This "Freshwater Hurricane" blew winds of about 70 mph coupled with temperatures of about 24 degrees Fahrenheit across Lake Superior. The L.C. Waldo was a 450 foot freighter loaded with ore and bound for Lake Erie when the storm hit. 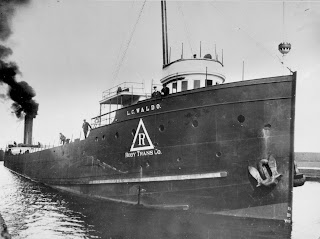 The Waldo faced  winds and seas so harsh that the pilot house and was torn away and the steering damaged. The master of the Waldo attempted to steer the mammoth steamer to shelter by slipping into the large bay behind Lake Superior's Keweenaw Peninsula. But in attempting to reach L'anse Bay, the vessel ran aground on Gull Rock, a little patch of rock and reef two miles off the coast of Michigan. The Waldo then broke in two, and the crew took shelter in the forward part of the steamer, where the freezing waves and spray soon formed a wall of ice that sealed them inside. The 22 men crew, two women, and dog aboard then endured almost four days being stuck inside the hull of the steamer without food as they waited for rescue. 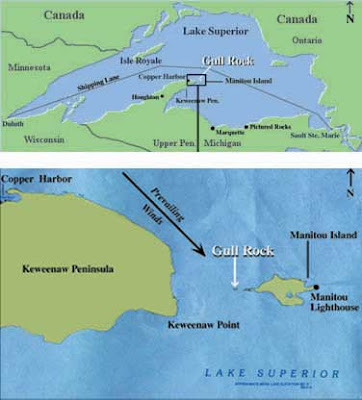 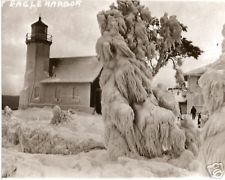 The Eagle Harbor Life-Saving Station, 30 miles away, learned of the wreck the next day. Their larger boat (the lifeboat) was under repair, so the crew set out in the smaller surfboat. They made it only 8 miles before the ice buildup on the boat forced them to turn around. Rumor says that some of these men were actually frozen to the ropes on the boat when they returned and had to be cut out by townsfolk. For the next day, the Eagle Harbor Lifesavers worked furiously to repair the lifeboat so that they could head back out to rescue the crew of the Waldo.

The Portage Life-Saving Station, located 60 miles from the Waldo, didn't learn of the the steamer's wreck until the following day. With their lifeboat in tact, the Portage Keeper left for Gull Rock, opting to take the longer route through L'anse Bay, which afforded more protection from the elements by going around the back side of the Keweenaw Peninsula. The keeper also arranged for a tugboat to meet them at the mouth of the Portage Waterway and pull the lifeboat the rest of the way to the wreck.

Both the Portage Lifesavers and the Eagle Harbor Lifesavers arrived at the Waldo in the early morning on November 11, reaching the wrecked steamer within minutes of each other. The lifesavers used axes to cut away at the built up ice sealing that sealed the crew inside the hull and saved everyone aboard, even the dog.

For their bravery, the lifesavers from both stations were awarded Gold Lifesaving Medals for their heroism.

So there you have it, a real life story of true lifesavers, and hopefully a good example of why the United States Life-Saving Service was so important.

If you missed some of the previous posts on the United States Life-Saving Service and are interested in reading more, here's a list:

Naomi Rawlings is mom to two young boys, a wife to her wonderful husband, an author for Love Inspired Historical, and an avid reader. She and her family live in Michigan’s rugged Upper Peninsula, where they get over 200 inches of snow per winter and share their ten wooded acres with black bears, wolves, coyotes, deer, and bald eagles. Because of her romance novel addiction (and the alarmingly high number of books she devours per week) she started a website for inspirational romance lovers like herself:  www.inspirationalromanceratings.com. Naomi is looking forward to the release of her next book, The Wyoming Heir, in January 2014. For more information about Naomi or her books, please visit her website at www.naomirawlings.com.
Posted by Naomi Rawlings at 12:00 AM