Crush, Texas—A Town for Only One Day

One of my favorite tasks as a writer is going on research trips and discovering interesting tidbits of history. While researching End of the Trail, the final book in the Texas Trails series, I learned about a unique historical event. It’s called “The Crash at Crush” and is the brainchild of George William Crush, a passenger agent of  the Missouri, Kansas, & Texas Railroad, also known as “the Katy.”
In an effort to better promote their railroad, Katy officials agreed to Crush’s unusual suggestion of crashing two retired train engines. The locomotives, Old No. 999, painted bright green, and Old No. 1001, painted a vibrant red, were displayed prominently during tours throughout the state and the “Monster Crash” was advertised all the summer of 1896. The event was free, with the exception of the train fare to deliver attendees to Crush, which cost $2 for a ticket from anywhere within the state.
George Crush chose a shallow valley fifteen miles north of Waco for the location, and in early September, five hundred workmen laid four miles of track afor the collision run, built a grandstand for attendees, three speaker's stands, two telegraph offices, a stand for reporters, and a bandstand. A restaurant was set up in a borrowed Ringling Brothers circus tent, and a huge carnival midway with dozens of medicine shows, game booths, and lemonade and soft-drink stands were built. Lastly, a special depot with a platform 2,100 feet long was constructed along with a painted sign, informing passengers that they had arrived at Crush, Texas. 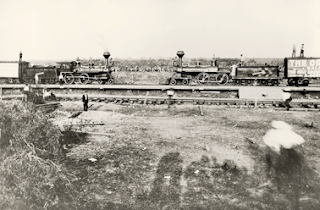 Twenty thousand people were expected, but by early afternoon on September 15, somewhere between 40-50,000 had arrived. At 5:00 P.M., engines No. 999 and 1001 backed off to opposite ends of the four-mile track. George Crush trotted a white horse to the center of the track and raised his white hat. After a long pause, he whipped it sharply down. A huge cheer rose from the crowd, and the locomotives lunged forward, whistles shrieking as they barreled toward each other at a speed of 45 mph. In a thunderous, grinding crash, the trains collided. The two locomotives reared up like wild stallions as they rammed together. Contrary to predictions, both boilers shattered, filling the air with hot steam, smoke, and pieces of flying metal. Spectators turned and ran in blind panic. In the end, several people were killed and at least six others were injured seriously by the flying debris. 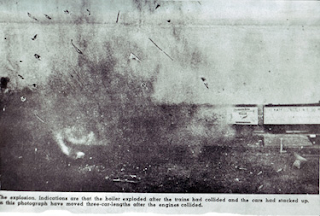 The wreckage was toted away, with souvenir hunters claiming pieces of the debris, booths and tent were removed, and by nightfall, Crush, Texas ceased to exist. The Katy railroad settled all claims against it, and George Crush was fired that same day, but he was rehired the next day and worked for the Katy railroad until he retired. Here’s a link to a You Tube tale of the crash and some cool historic photos: www.youtube.com/watch?v=jL5i_ZBzYk0

Pioneer Christmas Collection--Journey along with American settlers who learn that despite where the trail takes them or how primitive their lodgings may be, Christmas is all about the heart. Determined to honor Christ's birth, these pioneers find a way to make Christmas happen in places like a cave, a tipi, and a dugout. Modern readers will enjoy a peek into life before commercialism took over the sacred day, distracting us from the true blessings of faith, hope, and love. Enjoy nine original novellas of Christmas romance as penned from many of today's leading Christian authors, including Lauraine Snelling, Margaret Brownley, Kathleen Fuller, and Vickie McDonough.

Vickie McDonough is an award-winning author of 27 books and novellas. Her novels include the fun and feisty Texas Boardinghouse Brides series and the 3rd & 6th books in the Texas Trails series. Her novel, Long Trail Home, won the Inspirational category of the 2012 Booksellers’ Best Awards. Whispers on the Prairie, the first book in an exciting new series set in 1870s Kansas released in July and is a Romantic Times Recommended Read. To learn more about Vickie, visit her website: www.vickiemcdonough.com
Posted by Vickie McDonough at 12:30 AM