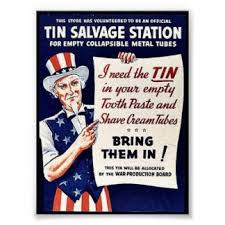 While researching everyday life during 1941 and 1942 for my current novel, I've been intrigued by the community involvement that supported the nation's war effort behind the scenes.
Last month, I talked about rationing in World War II, and how civilian supplies were limited to aid the military.


The other side of rationing was salvaging – giving the government personal goods to supply the troops. All over the country, there were public drives to salvage rubber, scrap metal, paper, silk and grease. 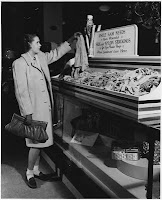 Schools and civic organizations like Boy or Girl Scouts spearheaded these efforts to collect household goods and spur public involvement. Some towns held scrap metal parades with trucks and carts loaded with piles of metal. Women and children participated as cans were emptied and crushed, baking pans were donated, and garages cleaned out as they searched for any metal they could find, metal which would be used to make bombs and cartridge casings. Many towns had assigned areas where scrap metal was stacked as citizens proudly made sacrifices to support the war. 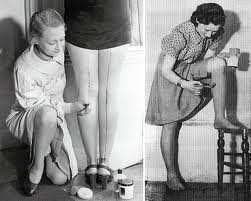 Factories that formerly made ladies’ hosiery began making parachutes. Since the Japanese controlled the islands that supplied these factories, recycled stockings were a necessary source of material. All over the country, hosiery drives collected thousands of silk and nylon stockings. At that time, women always wore skirts and hose, so they developed creative solutions to replace the hose, such as applying leg makeup and even drawing lines up the backs of their legs to emulate seams. Ads appeared such as the one in a Colorado newspaper: “Wanted to Rent: 1 pair silk stockings for 1 hour every Sunday mornings to wear to church.” 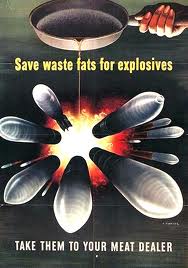 Another recycled product was animal fat. These fats made glycerin, an essential ingredient in explosives. The government posted guidelines for housewives to collect their cooking oil or grease cooked off from meat so it could be reused. Signs were posted on meat markets or groceries designating them as “Official Fat Collection Stations.” Celebrities on the radio appealed to housewives to turn in their waste fat regularly. Often those who donated were compensated with a penny per pound or given points for rationing.


The publicity campaigns that promoted salvaging appealed to the importance of those at home helping their soldiers on the field. As a result, there was a huge wave of patriotism that swept the country and encouraged civilians to proudly make sacrifices to aid the war effort and share the subsequent victory.


I heard from several of you last month who remembered rationing or saw the coupon books. How many of you remember or heard of saving cans, grease or donating hosiery?
Now available: Chicken Soup for the Soul - Devotional Stories for Wives, available at - Amazon - Barnes & Noble- Goodreads.