Dirigibles, Balloons, and Flying Machines...oh my! 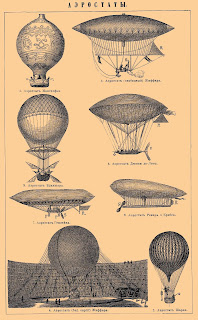 When you think of dirigibles, balloons and flying machines, do you expect to learn that these modes of transportation go all the way back to the eighteenth century? I certainly didn't!

According to my research, the Montgolfier brothers were the first to send up a balloon beyond the one-mile mark in 1783. Later that same year, a French physicist made the first manned balloon flight. To put these flights into perspective, there was no means of propulsion available to these intrepid inventors, so their balloons were left at the mercy of the wind until a steering mechanism was invented many years later.

In my latest novel, Millie's Treasure, the Pinkerton agent hero finds a pamphlet called Aerial Navigation: New York to California in Three Days among Millie's books in her library.  What readers might not know is that this pamphlet and its author, Rufus Porter, form the most interesting story I found while searching for information on these fascinating flying machines. Of course, there's nothing new about flying across the country from the East Coast to the West Coast, but when you consider that Mr. Porter was offering a chance to make this flight in 1849, that chances things, doesn't it? 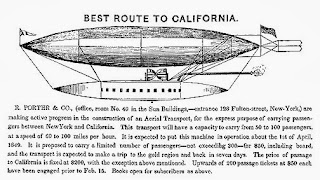 So who was Rufus Porter? He was a prolific inventor who received patents for a number of inventions including a washing machine, a corn sheller, and a revolving rifle that was sold to Samuel Colt for the princely sum of $100. His idea of flying miners out to the California gold fields was one he felt would be quite successful. Porter offered space for 50 to 100 people on his Aerial Transport at the cost of $200 each. Traveling at expected speeds of 60 to 100 miles per hour, round trips to the California gold fields were projected to take a quick 7 days! Unfortunately, after three attempts that were derailed by weather and vandalism, Porter scrapped his plans. As a postscript to this story, modern scientists have since marveled over the forward thinking technology of Porter's airship, and most agree that had he actually managed to complete the building of this invention, it would have very likely performed exactly as Rufus Porter claimed it would.

Can you imagine how something like Mr. Porter's Aerial Transport might have changed history? Talk about a gold rush! 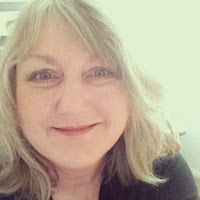 Bestselling author Kathleen Y’Barbo is a Carol Award and RITA nominee of fifty novels with almost two million copies of her books in print in the US and abroad and nominations including a Career Achievement Award, Reader’s Choice Awards, Romantic Times Book of the Year, and several Romantic Times Top Picks. A proud military wife and tenth-generation Texan, she now cheers on her beloved Aggies from north of the Red River. Find out more at www.kathleenybarbo.com.
Posted by Kathleen Y'Barbo at 1:00 AM