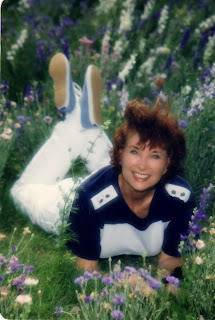 
Straight, sleek modern hair was not fashionable during World War II. Neither was the messy look. Perfectly styled, voluminous hair was trendy throughout the war.


Girls wore complicated hairstyles to make up for fabric rationing.Shortages of many materials, especially silk, leather and nylon dictated clothing fashion. To compensate for severe wardrobe restrictions America women turned away from the signature bob hairstyles of the Great Depression toward more feminine styles.


The long curling styles demonstrated by movie stars from Veronica Lake to Lauren Bacall are some of the most stylish hairstyles for women in the history of hair fashion.


The peek-a-boo bang, the top reverse roll, pin curls, side rolls, the up do, victory rolls, and the pompadour were popular. The styles took patience and practice, but the result was flattering and ultra-glamorous.


Hair dyes were banned in 1926. However, by the 1940s safer hair dyes were marketed. So women could achieve their desired hair color or hide embarrassing gray.


Blonde hair grew immensely popular due to actresses such as Jean Harlow, Mae West, and Ginger Rogers. Blonde hair was uncommon, so women wanted to achieve that look.


Upswept hairstyles featured elegant hairdos such as the Bundles for Britain style, 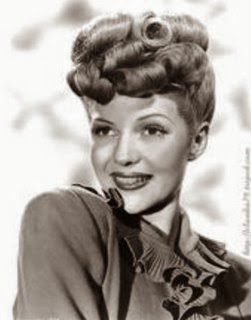 which secured the hair with a pair of knitting needles. This acknowledged knitting socks and sweaters for the troops. This hairstyle suited working women, many of whom were engaged in working at looms weaving items like woolen army uniforms.


A flurry of social activity such as charity balls and fundraisers arose to support the war effort. Women entered the workplace to replace men fighting abroad. The dress-up style referred to as the Purse Pompadour replaced a purse and a hat with a hidden fold of hair to contain a powder compact and lipstick. Larger styles could even conceal a small purse.


A braid hairpiece offered elegant hairstyles for housewives who returned to the workplace. The Fairy-do, created by winding a braid around the head above the temples, allowed a fold of hair to rest on the forehead.


Waves were deep, soft and sloping, like ripples of sand on a beach. 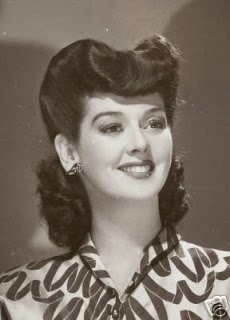 Rolls were an essential part of defining the WWII look. Women could shape and position rolls as they wanted. Rolls could be situated on the top of the head, at the sides or the back of the hair. Side rolls could be positioned symmetrically on each side of the face, or there could be just one roll. The shape of a roll could be helped with backcombing and by using rats.


A smooth roll going all round the back of the hair and curled under was pageboyala Veronica Lake’s long pageboy.


A Victory Roll was a sausage at the back of the hair that is rolled upwards. Women tied the top of an old stocking around their heads like a headband and rolled the hair over it.


The name came from pilots who, on returning from battle and having successfully shot down an enemy plane, did a victory roll, corkscrewing through the air before landing.


Bangs (Fringes) kept hair off the face, so if a woman had a fringe, she dressed it into the hairstyle or pinned it to one side. Hair never flopped onto the face. Fringes could be shaped into a roll, or waved to one side, or part of a mass of curls that sat high onto the face ala Betty Grable.


Hair grips, or bobby pins, were rare during the war, so women looked after them. They were shiny and could be worn visibly. For extra decoration, a bow made from ribbon could be added.


Combs and slides were made from Bakelite to look like tortoiseshell. Combs kept rolls in place. Slides kept the side hair pinned out of the way.


Braids were popular and could be either a person’s own long hair or added hair pieces. Plaited hair was used in various ways including round the crown or round the back of the head.


Ribbons were tied around the head and finished with a bow on the top or to the side. Or a piece of ribbon could be tied in a bow and attached via a grip to decorate the hair. 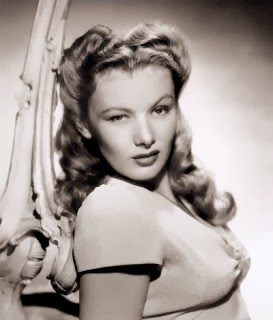 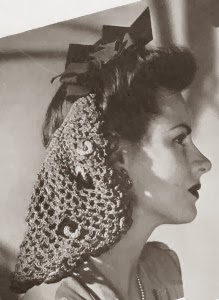 Snoods were a crocheted bag, often homemade, used to keep the back of the hair neat. Sometimes snoods were made from the same material as a dress to create a matching item.


Hairnets were used like a snood to keep the back of the hair neat and, because they were less visible than a snood, they were considered more sophisticated.


Scarves could be used as decorative pieces or to keep the hair out of the face and came in a variety of materials, sizes and patterns. They could be plaited into the hair and tied up. They could be folded into a triangle and tied on top of the head, like a turban, or worn around the head and knotted under the chin.

A turban was a length of material made from soft wool or rayon crepe. It was tied on top of the head and the long ends tucked under. The turban could be decorated with pompoms or flowers.

During the war, many products were hard to come by and women made do with whatever they could get. Beer or sugar water was used as setting lotion, with pipe cleaners, rags or pin curls used to create the waves.


Some older women still used the old hot irons to put waves into their hair, heating the irons in the fire. People recall the smell of their mother’s singed hair filling the house!


After the war, home perms became available. They proved much easier than setting hair each night with rags and pins.


Would you have liked going through all the preparation a glamorous hairstyle took?


Or maybe you lived during the war. Please share your story. Just look for the comment button.


If you are a writer, go to http://www.anneswritingupdates.blogspot.comfor helpful lessons.
A SECRET LIST 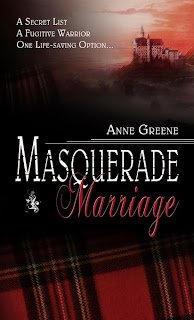 He was born to a clan of noted warriors and musicians. Yet to protect his loved ones and escape the dark fate of his brothers, he abandons his identity. Hiding from relentless soldiers who want him dead, he vows to protect the woman he loves more than life, more than freedom, more than . But his presence throws her into danger.


Steeling himself against the pain, he condemns himself to a life of heartbreak without her. Wanting her desperately, knowing he can’t have her, he surrenders her and heads alone to certain death. Outlawed, with a price on his head, does she love him enough to give up castle, lands, and family, and risk the agony of surrendering her heart a second time?
Leave a comment for a chance to win a free, autographed copy.