The Old West Lives On in Tombstone

How many little girls grow up wishing they’d been born during the 1800s and lived a wild, free life on the range? I certainly did. My sisters and I played farmer and rancher, my friends and I played cowboys and Indians, and I spent hours reading books about horses and cowboys. Then there were the TV shows—Bonanza, High Chaparral, Gunsmoke, Roy Rogers, Wagon Train, Maverick, and so many more. Doesn't that bring back wonderful memories for all of you Old West fans?  And let’s not forget the Western books, with Zane Grey and Louis L’ Amour topping the list during my teens and twenties. How I wished I’d been born in that era and could ride the range, sit around the campfire and experience all the exciting adventures with the heroes and heroines in the books I devoured. 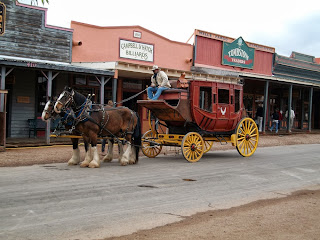 I didn't get to follow that dream, although I did buy my first horse when I was twenty and have owned one since. But the Lord gave me something even better, the opportunity to live out some of my dreams through writing historical fiction, and with it, the opportunity to research some Old West towns. I'd have to say my favorite so far is Tombstone, Arizona.

Tombstone was a blast! It was like walking into the past as we traipsed the dirt streets of the three block section of old town that’s been preserved. Many of the buildings have stood the ravages of time since the last fire in the 1880s that wiped out much of the town….it was rebuilt shortly after and those are the buildings we were privileged to visit.

One of my favorite spots was the Bird Cage Theater, which had only a small change to the interior. Almost every artifact inside was authentic, including an area on the old theater stage that houses a large number of historical items from the town including the hearse that carried people to Boot Hill. The theater contained bullet holes from gunfights along with an actual faro table and other gambling           paraphernalia.

We stayed for four days in a room at a small hotel used many times by John Wayne while he was there shooting movies. We visited the underground mines, talked to the locals, poked around in Wyatt Earp’s house (truly!), meandered through museums and had a picture taken of me in an Old West saloon setting. A new passion ignited in my heart. Who knew that researching and writing historical romance could be so much fun!

Katherine Galloway knew this moment of calm wouldn't last, blown away like the dandelion seeds she scattered as a girl. In 1880, three years after her husband’s death, she struggles to run an Oregon boardinghouse and raise two girls alone. Things don't get easier when her critical, domineering mother moves in. Katherine must make the situation work, but standing up for herself and her family while honoring her mother isn't easy. Then she crosses paths with Micah Jacobs, a widower who could reignite her heart, but she fears a relationship with him might send things over the edge. She must find the strength, wisdom, hope, and faith to remake her life, for everything is about to change. 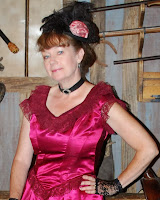 Miralee Ferrell’s debut novel released in the fall of 2007, and six more books have followed, with another six under contract with David C. Cook. Her historical western romance, Love Finds You in Sundance, WY, won the Will Rogers Excellence in Western Fiction award in 2012, and her first book in the three-book Love Blossoms in Oregon series, Blowing on Dandelions, released June 1, with the next two releasing in 2014. Miralee and her husband have been married over 40 years and live in the beautiful Columbia Gorge in WA State, where she loves to ride horses, garden, take walks, play with her dogs, and minister to women at her church.