Rejection after rejection filled my mail box as I sought a contract for my non-fiction proposals. I must admit, I actually felt a bit superior to fiction writers. They were just writing stories. I was writing biblical truth - ahem, ahem. Then after attending a fiction class at the Glorieta Christian Writers Conference and realizing powerful truth can be conveyed perhaps in a more palatable manner through stories--as Jesus did--I began to rethink my opinions.

It was about that time I stumbled across a published genealogy of my ancestors who were French Huguenots (followers of John Calvin) who fled the Catholic persecution in 17th century France. The book is a leather-bound original edition published in 1907. An elderly aunt had given me the book years before, but I'd only briefly glanced through it. As I read through it, I found it not only contained the official genealogy of our family on my mother's side, but there were stories and personal accounts of their journey. What a treasure! I wanted to tell the story of how my ancestors lived through this volatile period of history, and I decided to do it in the historical fiction genre. It was my favorite genre to read growing up, so it was a natural move.

I poured over the pages and gleaned what I could to build a story around their journey. Most of the material was about how they settled in Pennsylvania, which ends up as the third book in the series, but I wanted to write some of the Huguenot history in France, the atrocities they endured and the strong faith which emerged as a result of the persecution. My editor at Thomas Nelson suggested we go back 50 years earlier to incorporate the colorful character of Louis XIV, which is what I did in the first book in the series, "In The Shadow of the Sun King." 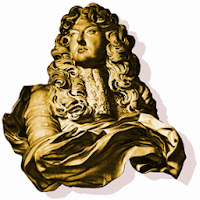 I ran across the story of a romance the powerful king experienced as a young man with a Huguenot girl and wove it around the heroine, my ancestor, Louisa Clavell. However, I gave her the name, Madeleine, in the book. Louis and Louisa would have been way too confusing.

In the early part of his reign, Louis employed many Huguenots, French Protestants, in his Catholic governmental council, because they had a reputation of being honest and trustworthy. He fell in love with the daughter of one of his Huguenot advisors and wanted to marry her, but was prevented from doing so by the Catholic influence of his family. Legend has it she was the love of his life, and he never got over her.

I'm offering a copy of "In The Shadow Of The Sun King" to one who leaves a comment chosen at random. Tell me what you know about your ancestors. Perhaps there is a novel waiting to be written!