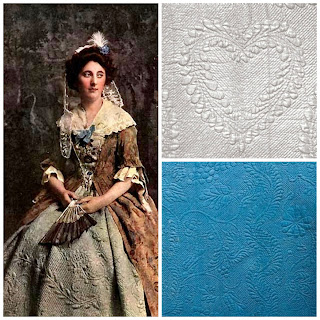 There are myths that have been perpetuated about quilting in early America that kindle our fascination for the past. Yet historians have discovered that quilting in colonial times is not what we might imagine.
When I researched quilts for my Quilts of Love series novel, Pattern for Romance, which takes place in 18th century Boston, Massachusetts my preconceived thoughts of quilts and quilting we altered forever.

A quilt is not a quilt — A “quilt” in colonial times was the terminology for a garment as well as a bed covering. When a woman put on her quilt it referred to her quilted petticoat. This petticoat was often ornately designed and worn as an outer skirt to show off the patterns stitched into the fabric. Under-petticoats were also worn, but a quilted petticoat was a beautiful garment meant to be shown off. Other garments were also quilted such as banyon robes, gowns, caps, waistcoats, and children’s garments.

Piecing a quilt — A bed quilt was not pieced together with scraps of fabric. Piecework quilts were not made popular until the early 19th centuries after the trade embargoes were lifted, although by the late 18th century some quilts were embellished with cut pieces of chintz and appliqued to the bed quilt. In colonial days, whole pieces of cloth were quilted together with batting in between the top and bottom layers, thus the whole-cloth quilt. The quilting on these bed coverings were stitched with elaborate designs and highly valued. 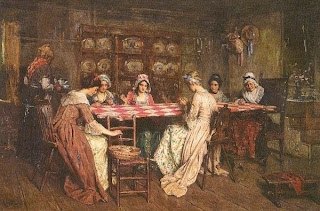 Time to quilt — Quilting was not a daily activity during the colonial era, except for someone who was a quilter by trade…and paid little for it. Quilting was enjoyed by women of leisure and higher social standing, but most women in colonial America could not afford to spend their time on such a task with spinning, weaving, cooking, farming to do. On occasion women would get together to quilt as a group activity as many hands make light work, but it was an uncommon event. This gathering was called a party or a quilting and the men would join them in the evening for food and dancing. The term “quilting bee” was not used until about 1825.

An American invention — We often think of quilting as being as American as Apple Pie and Baseball. Although quilting has been an American pastime for centuries, it did not originate in America as a thrifty necessity. As we know, America was created of peoples from many countries, people who already had quilting traditions and unique patterns. Whole-cloth and piece-work quilting can be traced to Egyptian times, but the whole-cloth quilting was done for centuries before the first pilgrims came to our country. Knights of the middle ages even wore quilted garments beneath their armor. In Marseilles, France during the mid-18th century, machine stitching of whole-cloth quilted fabric was invented and imported, yet it was not commonly available in America during the periods of trade embargoes, thus the need for colonial women to quilt their own garments and coverings when needed. 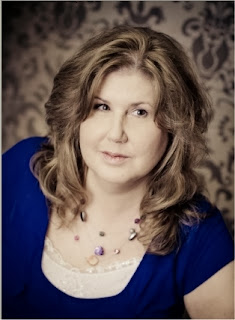 Carla Olson Gade has been imagining stories most her life. Her love for writing and eras gone by turned her attention to writing historical Christian romance. She is the author of “Season of Love” in Mistletoe Memories (Barbour/2013) and Pattern for Romance in the Quilts of Love series (Abingdon/2013). A native New Englander, she writes from her home in beautiful rural Maine where she resides with her family. You can connect with Carla on her blog Adventures of the Heart at www.carlaolsongade.com.


Christina Rich is giving away a 10.00 Amazon gift certificate to one commenter. Winner will be announced Saturday, November 9, 2013.
Posted by Christina Rich at 12:00 AM

Email ThisBlogThis!Share to TwitterShare to FacebookShare to Pinterest
Labels: Colonial