Tecumseh: Panther Across the Sky ~ by Ramona K. Cecil

While researching my book Heart’s Heritage, one of the more interesting historical figures I encountered was the war chief, Tecumseh. Born in 1768 near present day , , Tecumseh rose to fame as a prominent leader among the Native American tribes of the .

In the language the name Tecumseh means either “Shooting Star,” or “Panther Across the Sky.” The second definition seems more likely as his father belonged to the Panther clan of his tribe.

Living up to his name, Tecumseh spent his life in a fierce campaign to repel the migration of white settlers into the western lands. When Tecumseh was still a boy, his father was killed by white frontiersmen who entered lands in violation of a treaty. This seminal event may well have triggered Tecumseh’s determination to drive the white man back to the eastern seaboard. 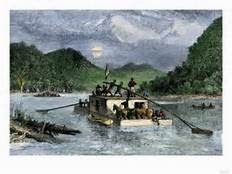 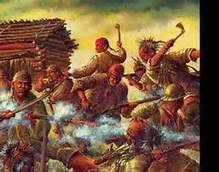 At the age of fifteen, Tecumseh joined a group of that regularly attacked flatboats carrying white settlers down the Ohio River from Pennsylvania.

﻿﻿
During the American Revolutionary War, the allied with the British to fight the American settlers. At the end of the war, Tecumseh continued to battle the Americans, joining the Wabash Confederacy, a group Native American tribes of the that banded together in an effort to push back the ever encroaching white settlers. Tecumseh took part in many battles including the Battle of Fallen Timbers against General “Mad” Anthony Wayne in which, prevailed.

Tecumseh’s younger brother, known as the Prophet, had turned from a life of alcoholism in his younger years to become a religious leader among the , predicting destruction of the white European race. Acclaimed by both friend and foe as an inspiring orator, Tecumseh eloquently preached against appeasement of the whites. Both brothers were bitter that other Native American chiefs had signed treaties that sold large chunks of the to the whites. In an 1811 speech, Tecumseh lamented; “Where today are the Pequot? Where are the Narragansett, the Mochican, the Pocanet, and other powerful tribes of our people? They have vanished before the avarice and oppression of the white man ... Sleep not longer, O Choctaws and Chickasaws ... Will not the bones of our dead be plowed up, and their graves turned into plowed fields?”


But unlike Tecumseh and his brother, not all leaders of the tribes saw violence as the best way to deal with the settlers. chief Blackhoof, worked to maintain peaceful relations with the whites. So when Tecumseh and the Prophet’s warlike rhetoric began causing tension between the Indians and the settlers, Blackhoof insisted that the brothers leave . Tecumseh and the Prophet moved west to near present day , , and established a village they called Prophetstown, now an and historical site.

In 1810, Tecumseh had a contentious meeting with governor, William Henry Harrison and demanded that rescind earlier land purchase treaties. flatly rejected Tecumseh’s demand, enraging Tecumseh. Violence between ’s men and Tecumseh’s braves was narrowly averted when a chief of the Potawatomi tribe urged the warriors to leave in peace.


The peace was short-lived as Tecumseh traveled south down the present day states of and recruiting Native American tribes to join him in warring with the white settlers. In 1811 two natural events occurred, helping Tecumseh in this endeavor. In March of that year, a comet streaked across the sky. Since his name meant “Shooting Star,” Tecumseh as well as Indians of various tribes took the sign to mean that the Great Spirit had indeed sent the chief to unite the tribes against the settlers. Then in December of that same year the New Madrid earthquake shook the entire , convincing the tribes that the Great Spirit wished for them to support Tecumseh ﻿and the Prophet.
﻿


While Tecumseh was down state recruiting allies, forces led by William Henry Harrison attacked and destroyed Prophetstown, burning it to the ground. This event came to be
known as the Battle of Tippecanoe. After that defeat, the Prophet is said to have placed a curse on Harrison who, years later, died a month after winning the 1840 election for President of the United States. For the next hundred and twenty years, every president elected in a year ending in zero died in office. This month Americans will observe the fiftieth anniversary of the assassination of President John F. Kennedy, elected in 1960. This phenomenon, which has been called the “Zero Curse,” was finally broken when President Regan, elected in 1980, survived an assassination attempt. 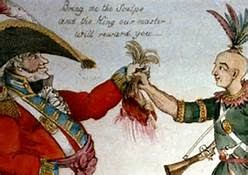 When the War of 1812 broke out, Tecumseh again allied with the British, who paid five dollars for each white American man’s scalp and three dollars for the scalp of a woman or child. Tecumseh’s campaign became a bloody part of the larger war.

Tecumseh finally met his own demise in 1813 at the of the Thames, which took place between British and American forces in .


Though a fierce and arguably blood-thirsty warrior, Tecumseh’s passion to hold onto his ancestral lands and the way of life can’t help but evoke a measure of respect. His eloquent words regarding life and death still echo a noble challenge down through the years; “When it comes your time to die, be not like those whose lives are filled with the fear of death, so that when the time comes they weep and pray for a little more time to live their lives over again in a different way. Sing your death song and die like a hero going home.”

Leave a comment for a chance to win a copy of Great Plains Brides, a compilation of Ramona K. Cecil's book A Bride's Sweet Surprise in Sauers, Indiana and Erica Vetsch's book A Bride's Portrait of Dodge City, Kansas. 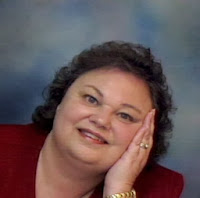