I didn't know our family had a direct link to the Civil War, until my mother recently decided she needed to clean out some boxes that she hadn't looked at in years. She sent me and my siblings an email that made my jaw drop...not just what she said, but the pictures she included that I've posted below, along with a full transcript so you don't have to strain to make out the words.

This letter was written to my dad's father from his (my grandfather's) uncle.

The script is amazing. I've not seen current penmanship that can match this.

Mom also found another letter that I'm not posting today, written during the same time period by a female ancestor, as well as some ambrotypes of ancestors taken, (approx) during the 1840s to the 1850s, we're not sure of the exact dates.

Here's what the Civil War letter says, with spelling and punctuation slightly tweaked to make it more readable.

It is with pleasure that I take my pen in hand to drop you a few lines to let you know how I get along. I am well, all except a wound that I got the 9th of this month in the battle of Fredrick city, MD. We left Washington the 4th in the evening for the western part of Md. We got the next day to Point Rock, a station on the east road near the river where we found some rebels a cross the river where we had a small skirmish that afternoon but none of our boys was hurt. We stayed there till the next day noon when we took up our line of march for Frederick city where we arrived just at dark. I had to stand picket that night. The next morning the 6th after breakfast we had orders to get ready to go again.

We crossed over the mountain where we found plenty of rebels. We had a skirmish with them that fore noon when we had to fall back to the city again where we held them and fought them till dark. I tell you, them shells and balls don't sound very nice when they fly around ones head. But on the 7th, our company ? was sent off to the right to watch the rebels from going around to our rear. We drove in some of their pickets (guards) when they charged on us where we had quite a brisk little fight when our captain was killed. He was shot right through the thigh and three other men in our company were wounded.

One was shot through the right ?brest and one in the leg the other had his arm of the left arm. I was one of the lucky ones that day. That night our picket were all called in when we fell back to the mountain to a junction on the railroad where that big battle was fought on the 9 where the rebels whipped us. We were falling back in the afternoon when the rebel cavalry charged on our regiment where we gave them a warm reception, when I got a ball in my neck right back of them big cords. It was a pistol shot. It did not hurt me much when it struck me. It felt as though someone had struck me on the neck but it pained me some but it feels better now.

After I was wounded, we fell back to the railroad where I got on the cars and went to Baltimore with a couple of hundred more of wounded men. We got in there Sunday evening where we were taken to hospital where I am yet. I hope that these few lines find you all well. I want you to write to me as soon as you get this and give me all the news, and the next time I will give you more of the news.

So goodbye for this time and be a good boy. This is from your brother,

I've included a number of true happenings from my ancestors in several of my historical romance novels, so I love discovering things like this. I think it adds so much richness to the fabric of a story when real life is included along with the fiction.

Leave a comment to be entered in a drawing for my new release, Blowing on Dandelions, the first in a three-book series of historical romances set in 1880s Baker City, Oregon, and available at bookstores and book sellers online, everywhere. 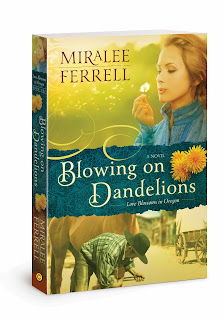 Katherine Galloway knew this moment of calm wouldn't last, blown away like the dandelion seeds she scattered as a girl. In 1880, three years after her husband’s death, she struggles to run an Oregon boardinghouse and raise two girls alone. Things don't get easier when her critical, domineering mother moves in. Katherine must make the situation work, but standing up for herself and her family while honoring her mother isn't easy. And with a daughter entering the teenage years, the pressure on Katherine becomes close to overwhelming. Then she crosses paths with Micah Jacobs, a widower who could reignite her heart, but she fears a relationship with him might send things over the edge. She must find the strength, wisdom, hope, and faith to remake her life, for everything is about to change.

Miralee Ferrell and her husband, Allen, live on 11 acres in the Columbia River Gorge. They have two grown children and recently their son and his wife presented them with a beautiful new granddaughter. Miralee has been writing since 2005, and her first book was published in 2007. Since then, she’s had 7 books published, both in women’s contemporary fiction and historical fiction, with another 6 under contract. Her western romance, Love Finds You in Sundance, WY, was awarded the Will Rogers Medallion for Excellence in Western Fiction and her newest release, Blowing on Dandelions, is the first in a three book series set in Oregon. Miralee loves interacting with people, ministering at her church, riding her horse and playing with her dogs. She also speaks at various women’s functions and has taught at conferences.
Posted by Miralee Ferrell at 12:30 AM