1893 World's Fair as Seen Through the Eyes of my Grandfather

My father was a number of years my mother's senior, having been born at the turn of the 20th Century, and his father was a newly married young man when the World's Fair, also called The Columbian Expo, came to Chicago in 1893. My grandparents, Edwin and May Gould, took the train from North Dakota to Chicago, where they spent a few days taking in the sights with friends. The following is part of my grandfather's diary entries for that week. 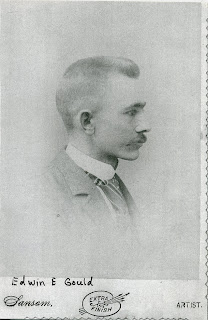 9/17. Owen took May and I to Gilby where we took the N.T. train for Chicago and the World’s Fair. 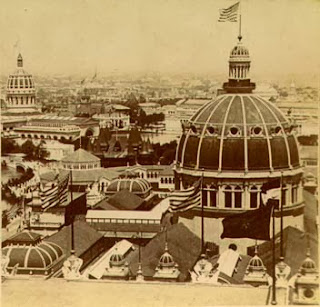 9/19 Arrived in Chicago at 7:10 a.m. Took Adams Co. horse car. Got off at Lexington Ave, 863 St. and registered at Hotel Hayes. Arrived on fair grounds at 9:45 and went at once to N.D. Blvd., where we met friends, when all hands started out sightseeing. First passed through CA State Building and then took in many attractions. We walked down lake front to anthropological bldg, also Columbus fleet, Krupp gun exhibit, Viking ship, and wooded island. Left grounds at 6 p.m. after supper, Geo. and I took electric road for city. I bought two tickets at Chicago Opera House.

9/23. Transportation building in morning. Sulky drawn by Nancy Hanks when she made her big time. Pullman palace train, old coaches and R.R. transportation of every description.

We all went down the Midway and took in Moorish palace and theater. We scattered and I took in the Arabian Settlement and ostrich farm, from there to Cairo, saw them ride camels. Took in Theater and saw abdominal dancing girls. From there I left fair grounds and took in Buffalo Bill’s Wild West show. Home to hotel from there.

9/25. Got on grounds at 8 a.m. Saw the new Peace bell. Took a look in Swede building, saw largest band saw in world—220’ long, 12” wide. To choral boulevard to hear Mexican orchestra. Saw Arabian trick players and Rosa the Turkish dancing girl. At 6 we left the golden door and fair ground, paid our bill at the Hotel and packed our trunk.

9/27. Arrived in Johnstown in the morning and Owen met us with horse and buggy. 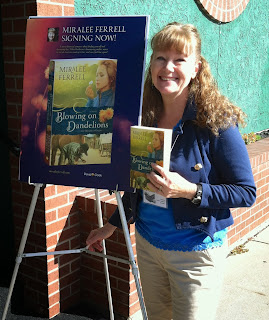 Miralee and her husband, Allen, live on eleven acres in the beautiful Columbia River Gorge in southern Washington State, where they love to garden, play with their dogs, take walks, and go sailing. She is also able to combine two other passions—horseback riding and spending time with her grown children—since her married daughter lives nearby, and they often ride together on the wooded trails near their home.
It didn’t take long to discover she had a natural flair for the historical time period, having read and watched so many Western stories while growing up. Her 1880s stories continue to grow in acclaim each year. Her novel Love Finds You in Sundance, WY, won the Will Rogers Medallion Award for Western Fiction, and Universal Studios requested a copy of her contemporary debut novel, The Other Daughter, for a potential family movie.
After serving five years as the president of the Portland/Vancouver chapter of ACFW (American Christian Fiction Writers), Miralee now volunteers as a board member and belongs to a number of writers’ groups. She also speaks at women’s groups, libraries, historical societies, and churches about her writing journey.

Blowing on Dandelions, First in the Love Blossoms in Oregon series, available NOW

Do Dandelion Wishes Actually Come True?
Katherine Galloway knew this moment of calm wouldn’t last, blown away like the dandelion seeds she scattered as a girl. In 1880, three years after her husband’s death, she struggles to run an Oregon boardinghouse and raise two girls alone. Things don't get easier when her critical, domineering mother moves in. Katherine must make the situation work, but standing up for herself and her family while honoring her mother isn't easy. And with a daughter entering the teenage years, the pressure on Katherine becomes close to overwhelming. Then she crosses paths with Micah Jacobs, a widower who could reignite her heart, but she fears a relationship with him might send things over the edge. She must find the strength, wisdom, hope, and faith to remake her life, for everything is about to change.
Posted by Miralee Ferrell at 12:30 AM