Christmas Traditions Through the Years

With Christmas only 16 days away, I figured it would be nice to track the traditions of Christmas throughout the centuries in the US and give a snapshot of how it's changed in regions and time periods.

For example, in the late 1600's and into the 1700's, before our nation was a full-fledged country of its own, Christmas pretty much remained secluded to the New England colonies. The middle-American and southern colonies had a handful of traditions, but they didn't fully begin to adopt the standard traditions we see today until the time around the Revolutionary War.

Come with me on a journey to see how some of today's traditions originated and when/how they were brought to the Americas:

In 16th-century Germany fir trees were decorated, both indoors and out, with apples, roses, gilded candies, and colored paper. In the Middle Ages, a popular religious play depicted the story of Adam and Eve's expulsion from the Garden of Eden. A fir tree hung with apples was used to symbolize the Garden of Eden -- the Paradise Tree. The play ended with the prophecy of a Savior coming, and so was often performed during the Advent season.

It is held that Protestant reformer Martin Luther first adorned trees with light. While coming home one December evening, the beauty of the stars shining through the branches of a fir inspired him to recreate the effect by placing candles on the branches of a small fir tree inside his home.

The Christmas Tree was brought to England by Queen Victoria's husband, Prince Albert from his native Germany. The famous Illustrated News etching in 1848, featuring the Royal Family of Victoria, Albert and their children gathered around a Christmas tree in Windsor Castle, popularized the tree throughout Victorian England. Brought to America by the Pennsylvania Germans, the Christmas tree became by the late 19th century.

According to legend, a kindly nobleman grew despondent over the death of his beloved wife and foolishly squandered his fortune. This left his three young daughters without dowries and thus facing a life of spinsterhood.The generous St. Nicholas, hearing of the girls' plight, set forth to help. Wishing to remain anonymous, he rode his white horse by the nobleman's house and threw three small pouches of gold coins down the chimney where they were fortuitously captured by the stockings the young women had hung by the fireplace to dry. 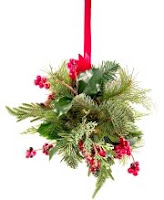 Mistletoe was used by Druid priests 200 years before the birth of Christ in their winter celebrations. They revered the plant since it had no roots yet remained green during the cold months of winter.The ancient Celtics believed mistletoe to have magical healing powers and used it as an antidote for poison, infertility, and to ward of evil spirits. The plant was also seen as a symbol of peace, and it is said that among Romans, enemies who met under mistletoe would lay down their weapons and embrace. Scandinavians associated the plant with Frigga, their goddess of love, and it may be from this that we derive the custom of kissing under the mistletoe. Those who kissed under the mistletoe had the promise of happiness and good luck in the following year. 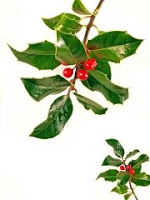 This plant was believed to possess magical powers because it remained green throughout the cold winters. Greenery was brought indoors to freshen the air and brighten the mood during the long, dreary winter. Legend also has it that holly sprang from the footsteps of Christ as he walked the earth. The pointed leaves were said to represent the crown of thorns Christ wore while on the cross and the red berries symbolized the blood he shed.

It was not long after Europeans began using Christmas trees that special decorations were used to adorn them. Food items, such as candies and cookies, were used predominately and straight white candy sticks were one of the confections used as ornamentation. Legend has it that during the 17th century, craftsmen created the white sticks of candy in the shape of shepherds' crooks at the suggestion of the choirmaster at the Cologne Cathedral in Germany.

The candy treats were given to children to keep them quiet during ceremonies at the living creche, or Nativity scene, and the custom of passing out the candy crooks at such ceremonies soon spread throughout Europe.

More recent explanations of the candy cane's symbolism hold that the color white represents Christ's purity, the red the blood he shed, and the presence of three red stripes the Holy Trinity. While factual evidence for these notions does not exist, they have become increasingly common and at times are even represented as fact. Regardless, the candy cane remains a favorite holiday treat and decoration.

The origin of Santa Claus begins in the 4th century with Saint Nicholas, Bishop of Myra, an area in present day Turkey. By all accounts St. Nicholas was a generous man, particularly devoted to children. After his death around 340 A.D. he was buried in Myra, but in 1087 Italian sailors purportedly stole his remains and removed them to Bari, Italy, greatly increasing St. Nicholas' popularity throughout Europe.

His kindness and reputation for generosity gave rise to claims he that he could perform miracles and devotion to him increased. St. Nicholas became the patron saint of Russia, where he was known by his red cape, flowing white beard, and bishop's mitre. In Greece, he is the patron saint of sailors, in France he was the patron of lawyers, and in Belgium the patron of children and travelers. Thousands of churches across Europe were dedicated to him and some time around the 12th century an official church holiday was created in his honor. The Feast of St. Nicholas was celebrated December 6 and the day was marked by gift-giving and charity.

After the Reformation, European followers of St. Nicholas dwindled, but the legend was kept alive in Holland where the Dutch spelling of his name Sint Nikolaas was eventually transformed to Sinterklaas. Dutch children would leave their wooden shoes by the fireplace, and Sinterklaas would reward good children by placing treats in their shoes. Dutch colonists brought brought this tradition with them to America in the 17th century and here the Anglican name of Santa Claus emerged.

Food is an important part of Christmas memories and traditions. Few can forget the wonderful aromas of oranges, cinnamon, and cloves coming from a warm kitchen as mom prepared all the treats, pies, cakes and cookies associated with the holidays. 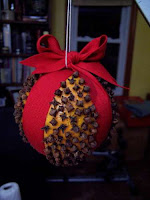 In my 3 books set in Colonial Delaware, my characters make pomander balls, which are oranges stuck with cinnamon and cloves. They also wrapped rosemary, bayberry, and other spices--which today we use in potpourri--in netting and set out the clusters throughout the home to give it a warm and cozy aroma. They make very unique gifts, and are great conversation starters as well. So what is a pomander ball? It is simply a piece of fruit, traditionally an orange, that has been pierced by cloves and dried so it lets off a wonderful aroma. Pomander balls can be used in drawers and closets like a sachet, or used as decorations at Christmastime by hanging them from a mantel or tree, or even just set in an attractive bowl on a table. They will continue to give off their scent for years to come!

Food was such an important part of Christmas celebrations that the preparation started with the harvest of summer fruits and vegetables, which were canned, preserved and pickled. Also prepared were fruitcakes and a huge supply of mincemeat pie filling, enough to make it through Thanksgiving and Christmas.

Whatever the tradition, the customary one that arose is that Christmas is for family and friends and loved ones to gather together. The influences are diverse, but the theme remains the same, no matter where you go.

The tradition of pomander balls was introduced in book #2 of my Liberty's Promise series, Quills & Promises. Who are the main characters of this story and what is the primary setting or time period of this book?

Visit my web site to find the answers, then come back here and post them in the comments section to be entered into a drawing for a chance to win a free autographed copy of your choice of one of my books.

You can also share a family tradition of your own to be entered. A BONUS entry will be given if you know the origin of that tradition. :)