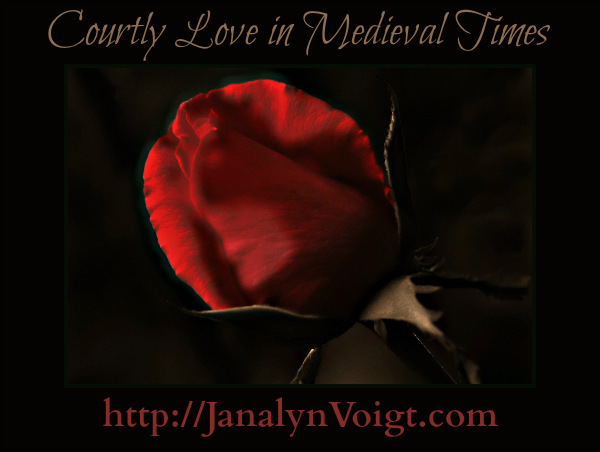 The idealized image of a lady favoring a knight who fought in a tournament for her is what many of us understand as courtly love in medieval times. However, the pursuit of romantic love in the middle ages wasn't such a romanticized ideal. In medieval times, most marriages were arranged or entered into for practical purposes rather than for love.

The concept of chaste and unrequited love, even for those who were married to others, spread like wildfire across medieval Europe and was in practice from the 1300's through the 1500's. Andreas Cappelanus, writing in the 12th-Century, described love as "a certain inborn suffering derived from the sight of and excessive meditation upon the beauty of the opposite sex." With this mindset, besotted poets were said to moan like moon-struck calves.

Such a system, based on the flawed idea that man is basically good and can control his behavior, flew in the face of Biblical precepts about marital faithfulness. It led to all sorts of trouble. Most of us have heard the cautionary tale of Guinevere, King Arthur's wife, and Sir Launcelot, a knight of the round table, who engaged in a love affair that led to tragedy. Although a fictitious interpretation of the Arthurian legend, this story aligned to the reality of illicit court romances engaged in during the Middle Ages.

The arranged marriages of the middle ages seem odd to us now but explains how the cult of courtly love took hold.

In my medieval epic fantasy novel, Wayfarer, which is based on 13th-Century Europe. the high king of Faeraven was expected to marry a princess from a neighboring kingdom by his parents and hers. At first the idea repels Elcon, but he soon finds himself attracted to this chosen bride and promises to court her when he returns from a peace-keeping campaign. His stirrings of desire for a princess of a hostile nation test his honor and threaten to tear apart the very fabric of Elderland.

Escape into creative worlds of fiction with Janalyn Voigt.

Her unique blend of adventure, romance, suspense, and fantasy creates worlds of beauty and danger for readers. Tales of Faeraven, her epic fantasy series beginning with DawnSinger, carries the reader into a land only imagined in dreams.

Site for Writers: Live Write Breathe (teaching articles plus a free How to Edit PDF)
Posted by Janalyn Voigt, escape into creative worlds of fiction. at 1:31 AM