The Chunky Creek Train Wreck of 1863 happened during the American Civil War near the town of Hickory, Mississippi on the Chunky River. On February 19, 1863 the Southern train left the Meridian, MS depot at 3:00 am to transport Confederate soldiers to the Battle of Vicksburg. Several civilians were also on board bringing the total number of passengers to around 100. 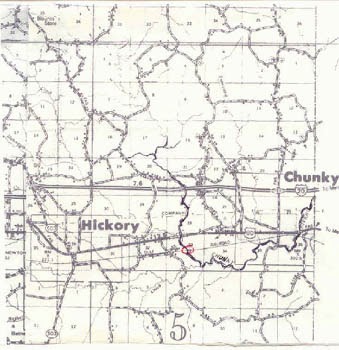 The engineer was under strict orders to get to as quickly as possible, and the soldiers themselves were eager to get to the battlefield.
But they never made it.
Instead, they barreled toward the Chunky Creek, thirty-five miles west of , toward certain death.
In an article detailing the tragedy, Greg Boggan describes the scene, “The continued flooding caused by winter rains had weakened the bridges significantly. A train had crossed the west Chunky bridge the day before, but only after all passengers were removed from the train. Debris continued to build up from the flood, and the bridge trestle had shifted by several inches due to the weight of the debris.”
According to Mr. Boggan, the bridge had shifted as much as six inches out of alignment with the tracks. Workers had made a futile attempt to repair the damage, but didn’t have enough crew and resources to get it done before the next train was due.
An elderly man had been placed in the Chunky hills with a lantern to stop the train, and a pole had been erected about 100 feet from the bridge--a common warning system employed at the time. No one knows why the engineer failed to heed these warnings, but regardless of every effort, the train continued on through the night toward its tragic destination.
The engine ran off the track as it hit the bridge, plunging into the ice-cold flood waters. The boxcars, loaded with passengers and cargo, followed like a string of dominoes crashing against each other.
A reporter later described the scene, “The wreck presented a frightful experience. The engine is out of sight in deep water, with the box cars crushed to pieces, lying directly upon it, portions of which are now above water, while three more, laden with barrels and boxes, in the stream, are piled up in confusion. Confounded.”
Many of the passengers were trapped in the wreckage or killed on impact, while the icy waters of the flooded creek swept others up and away.
Help for the survivors came quickly, but even then it was too late for over 40 Confederate soldiers and civilians. The First Battalion of Choctaw Indians, under the command of Major S. G. Spann, was based at a Confederate military training camp near the crash scene. Led by Jack Amos and Elder Williams, these brave soldiers rushed to the scene and plunged into the flooded creek, rescuing many who would have perished had they not performed such heroic acts.


As soon as it was day, rescuers began the gruesome task of recovering bodies and cargo from the swollen stream, and a first attempt at righting the engine was made. History says that over $80,000 was recovered from the baggage of W. P. Grayson, a paymaster for the Confederate government out of . Mr. Grayson perished in the tragedy.

On April 28, 2003, the Sons of the Confederate Veterans placed a wreath at the site of the Chunky Creek Train Wreck in observance of Confederate Memorial Day. As part of the ceremony, the names of identified soldiers and civilians were read. 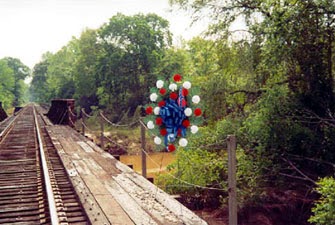 It's available in bookstores and from online retailers,
and has been seen roaming around at
Wal-Mart.

If you spot a copy out in the wild, I'd love for you to shoot
me a message (via facebook or my website) with location and a picture.

---
Pam Hillman was born and raised on a dairy farm in and spent her teenage years perched on the seat of a tractor raking hay. In those days, her daddy couldn’t afford two cab tractors with air conditioning and a radio, so Pam drove the Allis Chalmers 110. Even when her daddy asked her if she wanted to bale hay, she told him she didn’t mind raking. Raking hay doesn’t take much thought so Pam spent her time working on her tan and making up stories in her head. Now, that’s the kind of life every girl should dream of! Claiming Mariah is her second novel.
www.pamhillman.com
Posted by Pam Hillman at 12:00 AM