Wind Up the Automatons


In Lovington, New Mexico, Senator Jack Danglade (1898-1959) gave the children, and the young-at-heart, a marvelous Christmas present every year. His front and side yards were filled with animated and mechanical figures such as Santa and Mrs. Claus, elves, carolers, merry-go-grounds, Ferris wheels, reindeer, trains, and more. His estate maintained the animated displays after his death in a manner worthy of his intentions. As the years passed, we were very familiar with the extensive display. It was a thrill to see what new pieces were added and which old ones had been refurbished and put back on display.

The animated window display downtown in the Anthony's Department Store was a wonderland, too. Set on the corner of the town square, these 1940-1950’s mechanical figures was visible by every passing car. It was no wonder many families stopped, parked, and walked around the square during the Christmas holidays. 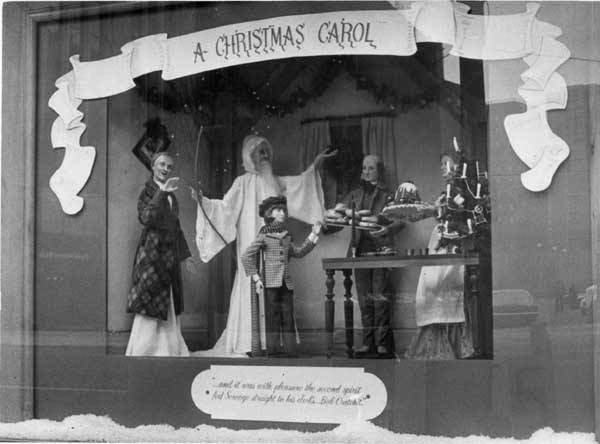 None, however, have been as awesome or enchanting as the 200-year-old clockwork boy. The automaton (au•tom•a•ton) sits in the Franklin Institute in Philadelphia, PA, and writes his three poems in intricate, scrolling cursive. His drawings are amazing. Waiting for his caretaker, Charles Penniman, to bring him to life, the "Draughtsman-Writer," as the boy is known, is the most complex automaton of its kind. 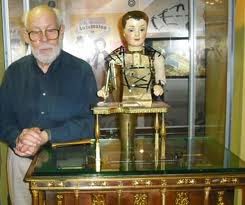 When he arrived at the Franklin Institute, he was in pieces, a totally ruined brass machine. It is thought that part of his body was destroyed by fire. He was donated by the estate of John Penn Brock. It was known that he was created in London in the late 18th Century, but the identity of his inventor was a mystery. It wasn't until he was repaired, refurbished, and drew one of his ornamental poems that "Written by the automaton of Maillardet" was found along the edge. Henri Maillardet was a famed Swiss clockmaker and mechanician.

The clockworks boy writes his three poems (two in French and one in English) and four drawings atop a box of 72 brass cams that control his movements. He has the largest memory of any such machine ever constructed. The fingers grasping the pen, guided by the movements of the cams, move side to side, front and back and up and down. Remarkable! 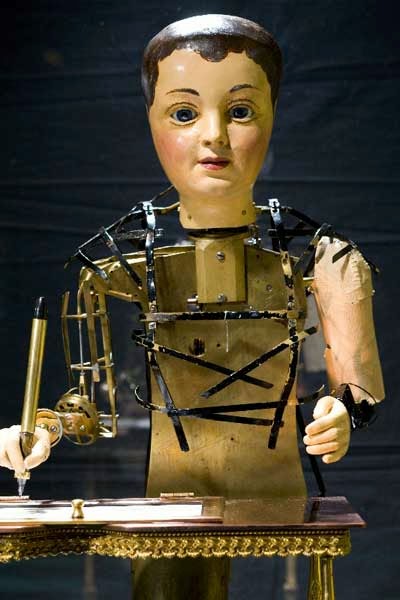 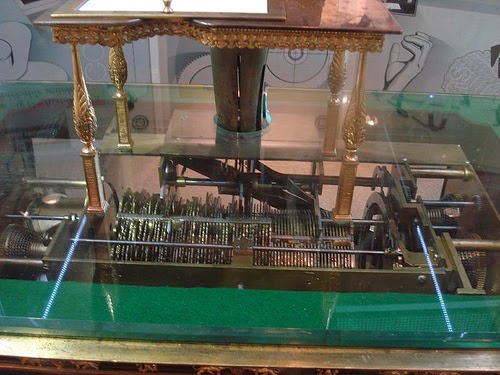 It's believed that Henri Maillardet made one other automaton that wrote in Chinese as a gift from King George III of England for the Emperor of China.

Automata is from the Greek word automatos "acting of one's own will." The first known use was recorded 1645. By the 19th Century, the middle class could afford to order an automaton from catalogues and large department stores for their own parlor. The figures were made with glass blown eyes, ivory teeth, eyelashes and wigs of human hair or mohair, and eyelids from thin kid skin. The word robot was thought to be introduced in 1920 by Czech writer Karel Capek, and not quite synonymous with automaton.

The Turk, created in 1770 Vienna by inventor Wolfgang von Kempelen, is another famous automaton. The chess playing automaton astounded audience and won matches against the era's most gifted players. The machine moved its own chess pieces, and instantly recognized illegal moves by its opponent. 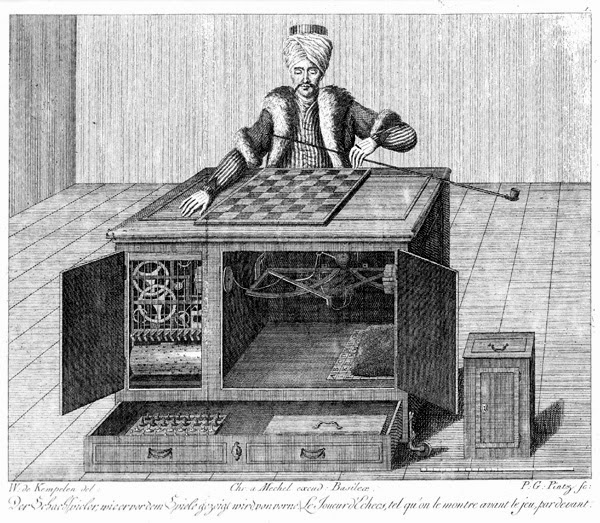 Napoleon Bonaparte, Benjamin Franklin, and Edgar Allen Poe were among its challengers. Poe reportedly became obsessed to expose how it worked. It's believed that the secret of the machine was an elaborate illusion, and that hidden inside the gear box was a human operator.

Not all automatons were created in the likeness of  humans. The bejeweled Ethiopian Caterpillar was created in 1820. Henri Maillardet, assisted by Jaquet Droz, is thought to be the creator. Just so you'd know, this automaton was sold at Sotheby's in Geneva in 2010 for $415,215.00. Get in line, there are only six known to exist.

The caterpillar is comprised of 11 jointed ring segments, framed by seed pearls, and decorated with translucent red enamel over an engine-turned ground, studded overall with gold-set rubies, turquoise, emeralds, and diamonds. Its underside is decorated with champleve black enamel.

Visit: http://www.fi.edu/learn/sci-tech/automaton/automaton.php?cts=instrumentation to see the boy in action.

Go to http://www.uh.edu/engines/epi2765.htm and see what you think about The Turk.

If you built an automaton, what would it do? 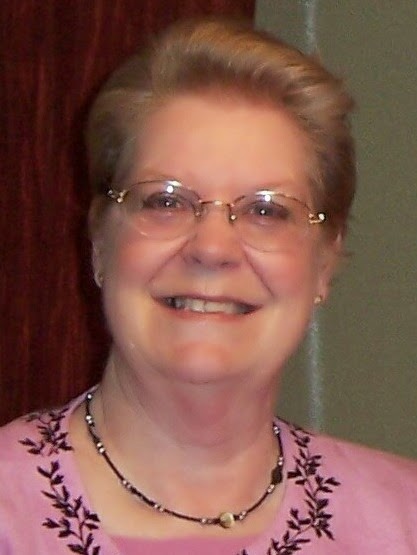 Lin writes historical fiction for adults and children. She and her husband, Jerry, live on a hay and cattle ranch in Chimney Rock, Colorado. Her current work-in-progress is a historical series Voices in the Desert about the Southwestern Indian Detour Couriers is set in New Mexico. Book One: Treasures Among the Ruins features Cornelia Miller, a recent college graduate, who is searching for self-identity apart from a strong political, socially prominent family. Her enjoyment of genealogy and family history adds unique elements to her stories.