A few days ago, my husband Paul and I spent the day at New Smyrna to celebrate our 40th wedding anniversary. However, I just can't go to a place without learning a little something about it. So today's post consists of tidbits from New Smyrna Beach. There's a great little museum there that was the original building for the first school house. It was built in 1872 at a cost of $42.00.

The Seminole Indians of Florida were long time residents of New Smyrna Beach long before Dr. Andrew Turnbull came in 1767. He started draining the swampy area so the land could be cultivated then he brought in folks from Greece who worked the land. He planted Indigo and it was very profitable for a time. But because of poor management it failed. As one of the curator's at the museum put it, "New Smyrna had a bunch of businesses for a season. Some of these industries included the Indigo, Turpintine, harvesting the live oak for ship building and a sugar mill. 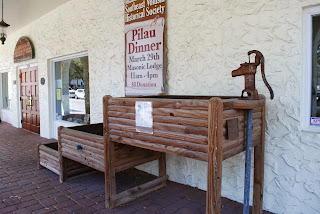 Here is an example of the bins used to make indigo dye which at times was worth more than gold.

In 1830 Henry Cruger built a Sugar mill on 600 acres. Years later it was burned by Seminoles. Here's a link to Sugar Mill Ruins with a bit of history about the place. Well worth a return trip to discover more.

New Smyrna was also host to tourism, even as early as the 19th century with the advent of the railroad down from St. Augustine, FL and ship travel. During the Civil War, 1863, the Oleander bombs and burns Sheldon Hotel that was built on the old Fort Mound. Here's a link to a video made by someone who visited the ruins. Sheldon Hotel Ruins In the museum there is a description talking about the bombing, as the bomb went through the building and into the piano. Well worth stopping in to the Museum with its rich info in such a small space. Weekdays you can go upstairs to work on genealogy and go through some of the other historic photographs they have.
Here are a couple pictures I took of the ruins.
From the top looking down on the structure 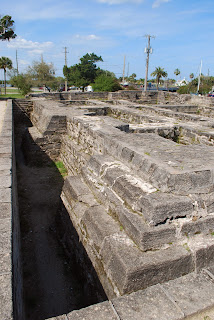 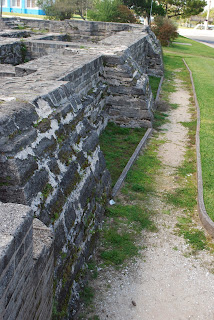 The Front wall that faces the water
And up close view of the coquina walls. 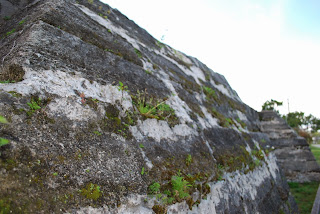 There's a great photograph from Mosquito Lagoon dated 1870. In this photograph you have several women on a boat, fishing, I suppose, but one gal is standing there with her shotgun ensuring safe passage. For a bit more on Mosquito Lagoon click here.

Other little tidbits:
Canal street used to be a canal.
City dock dredged and filled across the footbridge from canal street. Pier was built for commercial vessels.
Torpedo bottle, 1809, horizontal position kept the cork wet.
And there's another great photo of a sandy well heads, stabilized with bottles. The latest bottle 1905-6 which dates the well.

There's so much more to explore in this little gem but I'll leave you with this tidbit from Handbook of Florida ©1892
New Smyrna is a favorite resort for sportsmen. The proprietor of the hotel, Captain Sams, is familiar with the whole region and is always ready either to accompany his guests himself on hunting expeditions or to furnish competent guides, boats, and equipments. Large and small game of all kinds is to be found in the woods and savannahs of the mainland, and water-fowl frequent the marshy islands that border the lagoons. The best of salt-water fish are caught from the wharves or in the channel, especially in the vicinity of Mosquito Inlet, four miles distant.

Lynn A. Coleman is an award winning & best-selling author who makes her home in Keystone Heights, Florida, with her husband of 40 years. Check out her 19th Century Historical Tidbits Blog if you like exploring different tidbits of history. Lynn's latest novel is Courting Holly Her next novel, "Winning the Captain's Heart" is scheduled for release in July.