Hi, Winnie Griggs here.  I wanted to share a little tidbit of history I stumbled upon when doing some research into an unrelated topic - the subject of train doctors.

There are headlines aplenty these days around the topic of health care, but would it surprise you to learn that one of the early adopters of employer-based health care was the railroads?    While the vast majority of nineteenth century workers had to find and pay for their own medical care, the railroads were developing a unique and valuable employee medical benefit.

Because the nature of railway work and travel conditions led to a heightened likelihood of injuries to employees as well as passengers and bystanders some form of available medical services became almost a necessity. The problem became exacerbated with the opening of the transcontinental railroad.  As an ever increasing number of people were transported across unsettled territory, territory that never seen trained physicians or even the most rudimentary of medical facilities, the railroads had no choice but to hire their own physicians and set up medical facilities along their routes.
Thus was born the era of train doctors.  Most of the men and women who answered this call were actually general practitioners who could also perform surgery.   And because of the unique dangers railroad workers faced, the so-called train doctors found themselves faced with types of injuries which few had dealt with before.  They were pioneers in the development of trauma care under primitive conditions, developing techniques and treatments that eventually found their way into routine medical practice.

From the outset, most of these practitioners expressed concern over the conditions and equipment they had to work with, as well as the ability to see their patients in a timely manner when minutes could literally mean the difference between life and death.

One tool that resulted from the drive to get stop-gap care to workers who sustained injuries in remote areas, were special packs devised by railway surgeons to be carried on all trains.  These packs were stocked with basic emergency supplies such as medicines, sterile dressings and basic implements.  These were, in fact, the precursors of the modern day first aid kit.  Train doctors also promoted the training of key railroad workers in the use of such materials so that the injured party could be given appropriate first line aide until a proper physician could be reached. 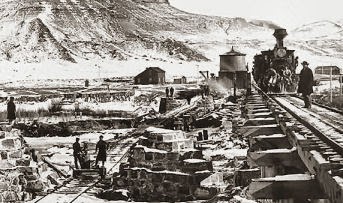 As for facilities, at first, railroad doctors tried using hotel rooms, spare rooms in residences or even back porches for emergency medical care, but such rooms not only lacked the necessary equipment, their use also resulted in a large expense for the railroads who not only paid for the use of the room but also faced cleaning and replacement costs for bloodstained linens and furniture.  As an alternative, the train doctors pushed for the development and use of hospital cars to serve as both properly equipped surgical facilities and transportation for seriously ill or injured patients.
The adoption of such cars greatly improved the survival rate of the seriously injured railroad worker and eventually evolved into highly sophisticated facilities.  They contained room to bed and care for three to four patients as well as a fully equipped operating room.  They were scrupulously maintained in order to provide a clean environment in which the surgeon could effectively perform his duties, stabilizing his patients before sending him or her on to a regular hospital.

Speaking of hospitals, the railroads were also very influential in establishing such facilities along their routes.  In mid-century it was remarked that a person traveling from  to  would traverse 1300 miles without passing a single hospital.    And this was only one of numerous such stretches in the country.  The first railroad to respond to this glaring need was the Central Pacific Railroad which opened its own hospital in  in 1869.  Other railroads quickly followed suit, establishing their own hospitals along well traveled routes.

Dr. C.W.P. Brock, President of the National Association of Railway Surgeons, was quoted as saying: Mr. Greeley’s advice to the young man to “go west” may be followed with great benefit by railway surgeons from the older sections of our country; and when they have seen the superb hospitals and the practical workings of the system they will say, as the Queen of Sheba said after seeing the splendors of King Solomon, “that the half had not been told.”

On a more practical front, another surgeon was heard to estimate that “the daily cost per patient at a railway hospital runs from 40 to 60 cents, compared to $1.00 to $1.50 at a city or contract hospital.”
Train doctors were overall a progressive lot.  They endorsed the emphasis on sterilization and overall cleanliness in patient care well before such thinking was met with universal acceptance.  They were also progressive in their attitude toward embracing women into their profession.  In 1894. Dr. Carrie Lieberg of Hope, Idaho was appointed division surgeon on the Northern Pacific.

In addition to surgery on railroad-related injuries and general trauma care, railway surgeons also took on the role of overall health care provider.  They treated a wide range of illnesses, performed routine checkups, delivered babies and advised on safety, health and sanitation issues.

Alas, the train doctors are no more.  There are a number of factors that contributed to the eventual demise of the once highly effective and indispensable system.  Key among them was the change in government regulations and the explosion of medical advances in the 1950s.  The last of the railroad hospitals were sold or closed in the 1970s and the remaining train doctors retired, joined other practices or set up private practices of their own.
But these dedicated men and women left an enduring legacy.

Their trade journal, The Railway Surgeon, though it reinvented itself a number of times, remains in print today under the name Occupational Health and Safety.

The modern day specialty of occupational medicine can trace its roots to these surgeons.  They also helped to shape modern medical practice, especially in the area of trauma study and care.  They were pioneers in front line field care, in the stabilization and transport of the seriously injured, in overall trauma care and in the development and use of the modern day first aid kit.

All but forgotten by the vagaries of our national memory, train doctors nevertheless played a major, but largely unsung, role in making the settlement of the western frontier a safer proposition for all who traveled through or eventually settled in the surrounding areas.
Posted by Winnie Griggs at 12:42 AM