Celebrating the 125th Anniversary of the First Oklahoma Land Run

April 22nd is the 125th anniversary of the first Oklahoma land run. It's an exciting piece of the history of my state and the theme of a book I'm currently writing called Gabriel's Atonement.

Rome, as we all know, wasn’t built in a day, but the city of Guthrie, Oklahoma, was. Or, to be more accurate, it was “built” in a few hours. On Monday morning, April 22nd, 1889, Guthrie was an unpopulated stretch of prairie land where coyote, wolf, and deer roamed freely, but before sundown, it was a town of at least ten thousand. The same was true for Oklahoma City. In the few hours after the cavalry bugles were blown indicating the start of the land run, streets had been laid out, town lots staked off, and steps taken toward the formation of a municipal government. That evening, the campfires of ten thousand people flickered on the grassy slopes of the Cimarron Valley.

That day, nearly two million acres of land opened up to white settlement the in Unassigned Lands of the Oklahoma Territory. Initially considered unsuitable for white colonization, Oklahoma Territory was thought to be an ideal place to relocate Native Americans who were removed from their traditional lands to make way for white settlement in other states. The relocations began in 1817, and by the 1880s, what is now the state of Oklahoma was home to nearly 40 tribes, including the Creek, Choctaw, Chickasaw, Cherokee, Cheyenne, Comanche, Kiowa, and, Apache. 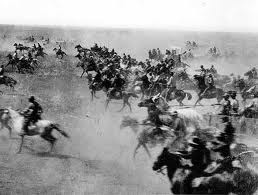 At 11:50 a.m. on April 22nd, 1889, soldiers signaled the Boomers to form a line. When the hands of the clock reached noon, cannons boomed and bugles rang out, and the race began. With the crack of hundreds of whips and yells of a myriad voices, thousands of Boomers streamed into the territory in wagons, on horseback, penny-farthing bicycle, and on foot. By nightfall, thousands of settlers had claimed town lots or the one of the many160-acre quarter sections of land. Towns like Norman, Oklahoma City, Kingfisher, and Guthrie sprang into being almost overnight. By the time Guthrie was only one month old, it had a hotel, general stores, three newspapers—and fifty saloons. 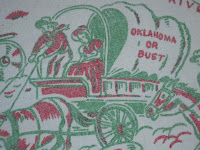 I was born and raised in Oklahoma, and the topic of the land runs has always fascinated me. I love the scene from the movie Far and Away, where Nicole Kidman and Tom Cruise ride in the land run, so it’s probably no surprise that the first book I had published was partially centered around the 1889 land rush. Sooner or Later is still available in eBook format, but next year, you'll be able to my series Land Rush Dreams, starting with Gabriel's Atonement, which releases in January, 2015. 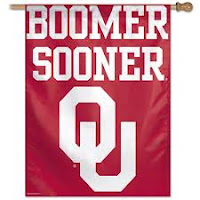 Surprise! I'll give one lucky commenter a copy of South Carolina Brides. Visit my website(address below) and sign up for my newsletter for an additional entry. 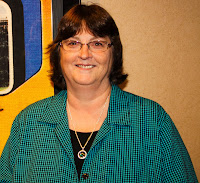 Vickie McDonough is the best-selling author of more than 30 books and novellas. Her novels include the Texas Boardinghouse Brides series and the Pioneer Promises series and 2 books in the Texas Trails series. Her novel, Long Trail Home, won the Inspirational category of the 2012 Booksellers’ Best Awards and End of the Trail won the Oklahoma Writer's Inc Best Fiction Novel book in 2013. This fall, Vickie has three charming Christmas novellas releasing. To learn more about Vickie, visit her website: www.vickiemcdonough.com