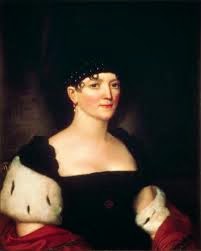 Elizabeth Monroe occupied the White House following the days of Dolley Madison. No two women could be so different in their approach to entertaining.

Aloof and reserved, Elizabeth offered hospitality only when she chose to be hostess. The contrast between the Madison and Monroe administrations was enormous and dramatic. Both James and Elizabeth let it be known right away that the open door policy of the Madison regime would no longer be.  People had to be invited before they were welcomed as official visitors.

James and Dolley Madison never returned to the White House after it burned. James and Elizabeth Monroe took residence in 1817, months after the inauguration. Since most of the furniture had been destroyed, the task of replacement fell to the Monroes. 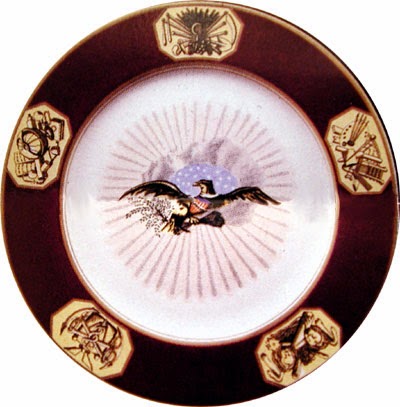 Since James Monroe had spent so many years in France, everything chosen for the White House bore the feeling, elegance and majesty of the French. The dining room is the most luxurious example of their choices. Most dominant in the room was its thirteen-foot-long carved bronze centerpiece for the state dining table. It consisted of seven main parts with mythological figures and detachable pedestals, garlands, vases, and candle holders.  In addition, Elizabeth selected a gilded porcelain table service and dessert service with gold-plated spoons.

Although Elizabeth Monroe showed great courage in her convictions, she suffered for it as Washington society snubbed her during half of eight years in office. When she did invite guests for dinner, it was a superb dinner in, of course, the French style.

Despite her aloof personality, she was an attractive woman who dressed in elegant style. Her is one of the gowns she wore for European Court during one of her husband's many trips to Europe. 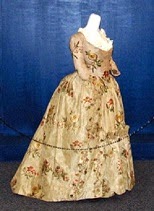 Because Elizabeth decided not to return calls and declined to make customary first calls, arguing that calling upon the First Lady was fine, but to return calls was time consuming and not in keeping with her position. Her break was a clean one, and to this day First Ladies do not return calls.

In spite of the snubbing and general dislike for her, the “Monroe look” is preserved and still exists today.

Because of her Virginia roots, many of the foods served during her time were Southern in nature. Her home at Oak Hill served as the source for many of the recipes served at White House functions during the Monroe administration.

Martha Rogers is a free-lance writer and the author of the Winds Across the Prairie and Seasons of the Heart series as well as the novella, Key to Her Heart in River Walk Christmas and Not on the Menu in Sugar and Grits. Love Stays True, the first book in her third series, The Homeward Journey, is now available. She was named Writer of the Year at the Texas Christian Writers Conference in 2009 and is a member of ACFW and writes the weekly Verse of the Week for the ACFW Loop. In addition to fiction, Martha has contributed to compilations by Wayne Holmes, Debra White-Smith and Karen O’ Connor as well as various devotion books. Martha is a frequent speaker for writing workshops and the Texas Christian Writers Conference. She is a retired teacher and lives in Houston with her husband, Rex. Their favorite pastime is spending time with their nine grandchildren and three great-grandchildren
Posted by Martha W. Rogers at 1:00 AM