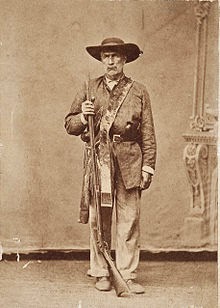 For my blog this month I'd to start a series on "Famous Texans" with William A. Wallace, who was more popularly known in legend as "Bigfoot Wallace." He was a Texas Ranger who took part in many of the conflicts both of the Republic of Texas and the U.S. when it fought the Mexican-American War.
He was born in 1817 in Virginia. Learning that he had lost a brother and a cousin in the massacre at Goliad in the Texas war for independence, he left for Texas to, as he put it, "take pay out of the Mexicans." He was a large man at six feet two inches. He was given his name by a compadre, who took the name from a large Indian known for stealing livestock. The man who jokingly gave him the nickname, ironically, was later killed by Bigfoot the Indian.
He fought in the battles of Salado Creek, the Hondo River, and survived being in Perote Prison at Mier after the "Black Bean Incident" in which the Mexicans executed every man who had picked a black bean in a drawing. Wallace noted that the black beans had been poured in at the top of the jar and "drew deep," fortunately picking a white bean. (Curiously, in Larry MacMurtry's western DEAD MAN'S WALK, a prequel to LONESOME DOVE, he wrote that Bigfoot had picked a black bean and was executed after the drawing—I wonder why he did that?) He later participated in the Battle of Monterrey and the Comanche Wars.
After the Mexican-American War, and Texas became a state, Wallace had his own Ranger company and fought border bandits as well as Indians. He was such a good tracker that he was frequently asked to catch runaway slaves trying to make it to Mexico. He also drove a mail stage and once, after Comanches killed his mules, he walked to El Paso and consumed 27 eggs at the first household he stopped at, then went on to town for a "full" meal.
During the Civil War he guarded the white settlers on the frontier against Comanches. The state of Texas granted him a ranch on the Medina River.
He spent the last years of his life at a small village named Bigfoot. He was reputed to be a mellow person who like to tell exaggerated stories of his career, though he was known to be honest in his personal dealings. He never married.
He died in 1899 and his body was moved to the Texas State Cemetery in Austin.
Blessings, Laurie Kingery 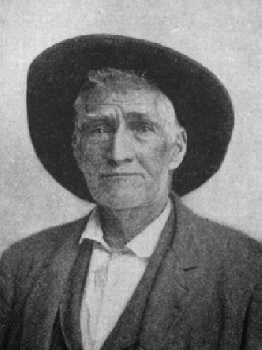