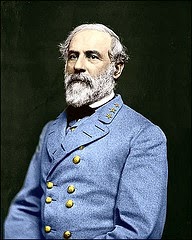 To summarize the career of Robert E Lee is impossible in a short blog. He has become the symbol of the Confederate States, of the South, with dignity and much admiration, despite the defeat of his Army.

Although his mother was from a wealthy family, he grew up in poverty due to his father's bad business decisions. Thinking a military career would be his way to success, he went to West Point and then married Mary Custis, a descendant of Martha Washington.

Lee's reputation as a brilliant military leader began during the Mexican American War. He led the raid on Harper's Ferry, and when the Civil War broke out, President Lincoln offered him the command of the Union Army. He felt he could not take up arms against his beloved Virginia, so, instead, became the General of the Confederate Army of Virginia. Although his armies were outnumbered, they managed to win many battles due to his courage and brilliant military strategy. General Lee soon became known as the "Grey Fox," because of the grey uniform he wore and the grey horse he rode (Traveller) ... and because of his shrewdness as a commander.

Despite the fact that he fought gallantly, the Southern forces were defeated because of the overwhelming numbers of the Union Army. He surrendered to General Ulysses S Grant at the Appomattox Courthouse on April 9, 1865, amid great shows of respect from soldiers on both sides.

An interesting side note: After the war, General Lee was no longer considered a citizen of the United States. General Ford restored his citizenship in 1975 after papers were found professing his loyalty to the United States.

Golden Keyes Parsons writes historical fiction, and is also a popular retreat/conference speaker. Her highly acclaimed Darkness to Light Series (Thomas Nelson Publishing) chronicled the journey of her French Huguenot ancestors in 17th century France. Her fourth novel, His Steadfast Love, is a Civil War novel set in Texas. Her latest releases are ebooks (WhiteFire Publishing) – a biblical fiction series entitled Hidden Faces, Portraits of Nameless Women in the Gospels. A print compilation of the four novellas released April 15th, 2014. Golden lives in Waco, TX, with her husband, Blaine, where they enjoy their children, grandchildren and great-grandchildren and are avid sports fan of their alma mater, Baylor University. You can contact her at www.goldenkeyesparsons.com.