Laurie Kingery here, and this month I'm continuing my series on Texas heroes by telling you about Deaf Smith.

Deaf Smith, pronounced "Deef," was so named because of an illness that affected his hearing in his thirties. I was unable to find out what his original first name was. He was born in New York in 1787. His family moved to Natchez in 1798, and he went to Texas for "health reasons" in 1821, but moved back to Natchez in 1822. The same year, he married a Tejana (a Texas woman of Hispanic origin) named Guadalupe Ruiz Duran and had four children with her. She died, and he then married her sister Simona. He was known as a man of few words. 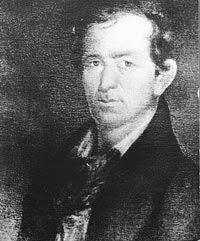 When trouble began in Texas between the Anglo settlers and the Mexican government, Deaf Smith wanted to remain neutral, but when he and his son-in-law were refused entrance to his home in Bexar (present-day San Antonio) after going on a hunting trip this apparently changed his mind, telling Houston, "I now tender you my services as the Mexicans acted rascally with me."

Since he moved easily between the Mexican and Texans, his intelligence-gathering was invaluable. He served as courier to Travis at the Alamo and carried Travis's letter from the Alamo on February 15. He met Houston at Washington-on-the-Brazos when he signed the Texan Declaration of Independence, and after the Alamo fell, he escorted Mrs. Dickinson, the lone survivor, to General Houston and reported on the fate of the Alamo.

He was assigned to Karnes' Cavalry Company of the 1st Regiment of Volunteers. At Harrisburg, he captured a Mexican courier with information on the strength and possession of Santa Anna's army. He and his men destroyed Vince's Bridge before the battle of San Jacinto that won Texas's independence. This bridge was the way of retreat or reinforcements for both armies. He later captured Mexican General Cos.

He later raised a company of Texas Rangers, who then fought and won a battle with a superior force of Mexicans near present-day Laredo, a year after San Jacinto. 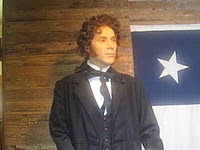 For his services, the Republic of Texas legislature granted Smith any house and lot in the city of Bexar (San Antonio.) He died at age 50 in Richmond, and was buried at the Episcopal churchyard with a marker that read "Deaf Smith, the Texas Spy." A plaque at his museaum in Hereford, Texas, commemorates him by saying: "A man more brave and honest never lived." A county in Texas was named after him, and it's also pronounced "Deef" Smith. 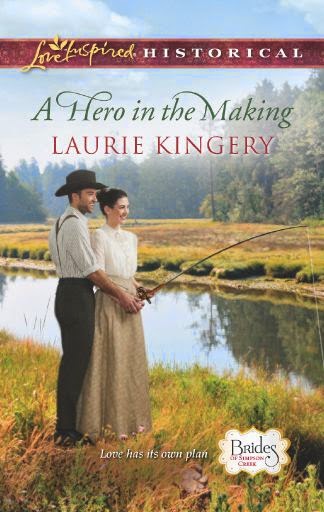 Thanks for sticking with me to the end. If you'll be kind enough to leave a comment, I'll enter you into a drawing for the latest installment in my "Brides of Simpson Creek" series for Love Inspired Historicals, A HERO IN THE MAKING. And please, if you comment, please watch in that same space for the news that you've won so I can get your snail mail address for you. In my last giveaway, the prize was never claimed, despite numerous attempts on my part to notify the winner. :/
Blessings, Laurie Kingery