What did people do before the age of stand-up comedians to underscore the absurdity of ideas or fashion or even dictators? Aside from the ancient court jester, they had satirical wits and poets.

These literary minds served much the same purpose as our present day comedians, as well as some of our cartoons: To highlight the absurd wherever it is found, using anything and everything as fodder for their sometimes biting invective. It was a socially acceptable, and mostly safe way to express either condemnation or reproval, or at least to poke fun at anything from relationships to governments.

Since we've already seen a few posts regarding the popularity of weddings in this lovely month of June, today's post will add a note of levity to the archives. Even now, the marriage relationship remains a popular subject for comedians, but this is merely a continuation of an age-old tradition of knocking marriage. The highly popular nineteenth century periodical, Punch, (aptly named) delivered a steady diet of satire for its audience, and few things escaped its notice. Marriage, as one would expect, did not.

While cynicism towards love and marriage is nothing new, the following comes across to our modern ears as rather novel. People seldom take the time to write poems as social commentary nowadays, so I think you'll enjoy this little tidbit (despite the strident chauvinism, since it really pokes fun at the male sex even more than the female).

And so, I give you, from the periodical, "Punch":


COURTSHIP AND MATRIMONY
A Poem, In Two Cantos 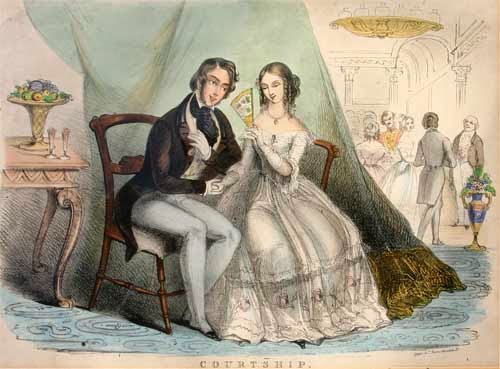 Fairest of earth! if thou wilt hear my vow,
Lo! at they feet I swear to love thee ever;
And by this kiss upon thy radiant brow,
Promise affection which no time shall sever;
And love which e'er shall burn as bright as now,
To be extinguished--never, dearest, never!
Wilt thou that naughty, fluttering heart resign?
CATHERINE! my own sweet Kate! wilt thou be mine?

Thou shalt have pearls to deck thy raven hair--
Thou shalt have all this world of ours can bring;
And we will live in solitude, nor care
For aught save for each other. We will fling
Away all sorrow--Eden shall be there!
And thou shalt be my queen, and I thy king!
Still coy, and still reluctant? Sweetheart say,
When shall we monarchs be? and which the day?

Now MRS. PRINGLE, once for all, I say
I will not such extravagance allow!
Bills upon bills, and larger every day,
Enough to drive a man to drink, I vow!
Bonnets, gloves, frippery and trash--nay, nay,
Tears, MRS. PRINGLE, will not gull me now--
I say I won't allow ten pounds a week;
I can't afford it; madam, do not speak!

In wedding you I thought I had a treasure;
I find myself most miserably mistaken!
You rise at ten, then spend the day in pleasure;--
In fact, my confidence is shaken.
Ha! what's that uproar? This, ma'am, is my leisure;
Sufficient noise the slumbering dead to waken!
I seek retirement, and I find--a riot;
Confound those children, but I'll make them quiet! 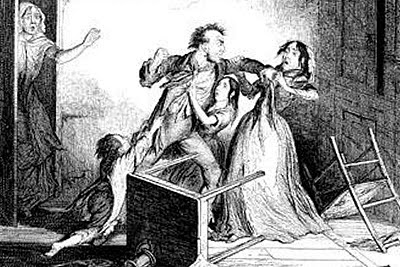 Another poem in a similar vein by Thomas Hood (1799-1845), called "The Bachelor's Dream," might just as well have been titled "The Bachelor's Nightmare"!  It's too long to print, but if you're curious do look it up on Google books.

While I enjoy these poems, the danger is in taking them too seriously. Just as we as individuals have our good and bad days, so do our marriages. Aside from a truly abusive one, that is. Otherwise, I think we all have moments in marriage where we think, like Lizzie Bennet, below: 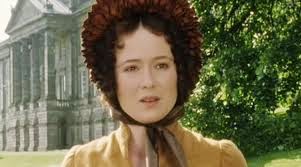 Oh, dear. This is not what I had planned.

And we must allow that marriage is sometimes only what we make it: 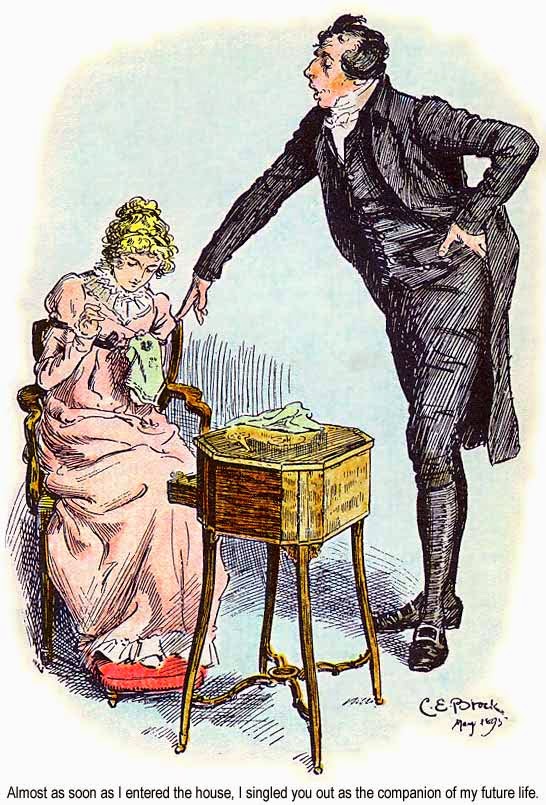 Or fail to!
[Note: In case you aren't familiar with the above illustration, it is Mr. Collins pontificating to Lizzie about his numerous ideas of what marriage is and should be, blah, blah, blah, blah, in Pride and Prejudice.]

That is about as deep as I can possibly get in a blog post right now. Especially because I must take my leave as I'm off to--what else? A wedding! Happy June. 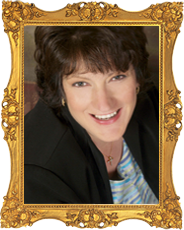 Linore Rose Burkard is best known for historical regency novels with Harvest House Publishers, including Before the Season Ends, the award-winning The House in Grosvenor Square, and, The Country House Courtship.


Linore teaches workshops for writers with Greater Harvest Workshops in Ohio, is a homeschooling mother of five, and is currently working on a YA novel. Keep up with Linore by subscribing to her free newsletter atLinore@LinoreBurkard.com

Posted by Linore Rose Burkard, Novelist at 1:23 AM