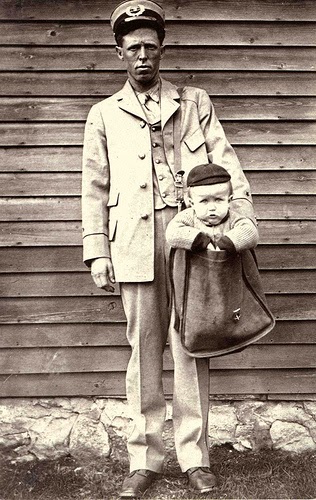 True or False? At one time, it was legal to mail babies through the U.S. Postal Service.

True. On January 1, 1913, sending packages via the U.S. Parcel Post Service began. Regulations stated that packages could not weigh more than fifty pounds. The service was not intended as a means to ship children, but there were a few instances when it happened. Although the photo above was supposedly staged as a joke, the following stories recount some real cases of children being shipped.

The New York Times reported in an article that a mail carrier in Batavia, Ohio, delivered a baby from his parents to his grandparents:

Vernon O. Lytle, mail carrier on rural route No. 5, is the first man to accept and deliver under parcel post conditions a live baby. The baby, a boy weighing 10-3/4 pounds, is the child of Mr. and Mrs. Jesse Beagle of Glen Este. The boy was well wrapped and ready for mailing when the carried received him today. Mr. Lytle delivered the boy safely at the address on the card attached, that of the boy's grandmother, Mr. Louis Beagle, who lives about a mile distant. The postage was fifteen cents and the parcel was insured for $50.

A year later, the Times reported a similar instance of a small boy being shipped by his grandmother to an aunt via Parcel Post:

Mrs. E.H. Staley of this city received her two-year-old nephew by parcel post today from his grandmother in Stratford, Oklahoma, where he had been left for a visit three weeks ago. The boy wore a tag about his neck showing it had cost eighteen cents to send him through the mails. He was transported 25 miles by rural route before reaching the railroad. He rode with the mail clerks, shared his lunch with them and arrived here in good condition.

On February 19, 1914, the parents of four-year-old May Perstorff mailed her from Grangeville, Idaho, to her grandparents in Lewiston, Idaho. Mailing May was apparently cheaper than buying her a train ticket. The little girl wore 53-cents worth of postal stamps on her jacket as she traveled in the train's mail compartment.

After hearing of such instances, the Postmaster General issued a regulation forbidding the sending of children in the mail, stating that "children did not come within the classification of harmless live animals (bees and bugs) which do not require food or water while in transit."

Although these examples were misinterpretations of the purpose of the post office, they do attest to a time when travel was difficult for most people. They also reflect the trust people had in the mail carriers to take care of their most valued possessions, their children.

If it were legal, would you mail your child today?

Email ThisBlogThis!Share to TwitterShare to FacebookShare to Pinterest
Labels: US Postal Service