Today I am actually at Lake Champlain where we celebrated our granddaughter's 16th birthday yesterday. Today we're simply enjoying the sun and lake with the family. Below is a picture I took of this lake last year, not during the summer. 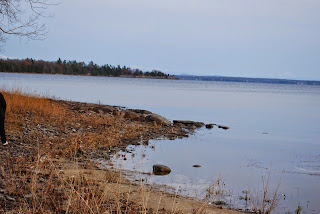 The lake's history is vast, from the discovery back in 1609 by Samuel de Champlain who was the founder of Quebec, Canada.

Back in the 19th century it was a primary source of transportation from New York City to Quebec, a huge trade route and many a wars were fought on it's shores and waters. Below is a quote from "Nelson's Guide to Lake George and Lake Champlain" ©1858.
The extent of Lake Champlain is as follows: It is 120 miles long, from Whitehall at the southern to St. John's at the northern end. It lies north and south, and its northern extremity crosses the line that divides the United States from Canada. In breadth the lake varies from one fourth of a mile to thirteen miles, and it covers an area of 500 miles. Its waters are well stored with salmon, sturgeon, trout, pickerel, and other varieties of fish.
Lake Champlain forms part of one of the main routes between the United States and Canada. The navigable waters of the Hudson are connected with it by the Champlain Canal, which is sixty-four miles long, and forty feet wide. It has twenty-one locks, and rises to a height of 134 feet above the Hudson, descending again fifty-four feet to the lake. At Sandy Hill it has a feeder of considerable size, which is navigable. The cost of construction was nearly 1,080,000 dollars; and it took about three years to complete, having been commenced in 1816, and finished in 1819. This lake is also connected with the St. Lawrence and Montreal by canal and railway ; and also with New York, Boston, and Ogdensburg. Its waters are crowded with shipping of all kinds; steamers, tugs, sloops, schooners, canal-boats, barges, and small craft, are constantly passing to and fro, giving life and animation to the scene. The steamers are first rate in all respects—swift, elegant, commodious, and well manned. They run daily from Whitehall to Rouse's Point, stopping at intermediate stations.

Today it is still a place of commerce as well as a tourist location. If you're looking for a great place to visit, I highly recommend it. And while the shores are tranquil and calm, the possible stories washing across my mind are not.

Bullet Points
Several battles fought on Lake Champlain during the American Revolution
War of 1812 battles but the Battle of Plattsburgh marked the end of the British invasion.
Canal was built in the early part of the 19th Century

Lynn A. Coleman is an award winning & best-selling author who makes her home in Keystone Heights, Florida, with her husband of 40 years. Lynn's next novel "Winning the Captain's Heart" is scheduled for release in July 1st.
Check out her 19th Century Historical Tidbits Blog if you like exploring different tidbits of history.
Posted by Lynn Coleman at 1:00 AM