Law West of the Pecos

The town of Langtry sits on the western side of Texas and has a colorful past with an interesting history on the supposed origin of its name. The most prominent and well known citizen of the town was one self-appointed Judge Roy Bean.

Now Judge Bean was a colorful character who hauled supplies for the Confederates near San Antonio during the Civil War. He did marry, but it ended in divorce in 1880 and he settled in a railroad construction camp near the Pecos River where the Sothern Pacific Railroad men worked hard to complete a bridge over the Pecos River and thus continue on with the transcontinental route. The community formed served as a temporary home for thousands of railroad workers and Roy Bean quickly established a saloon in the tent city of Vinegarroon.

When it became known that a Justice of the Peace was needed for the area, Roy Bean was quick to volunteer and on August 2, 1882, he became the only legal authority in the area. In no time he became the self-proclaimed “Only Law West of the Pecos.”

In 1882, constructed on the bridge ended and the town of Vinegarroon abandoned. So, Bean headed northwest and established another little town. He set up a tent saloon at the camp of Eagle Nest and later built a wooden structure for his saloon. The town then became Langtry, named after George Langtry.

Because he admired Lillie Langtry, a well-known British stage actress born in Jersey, England, Bean named his saloon the Jersey Lilly and boasted of his personal acquaintance with Lillie although they’d never met. Her name fit the saloon as its reputation was as disreputable as hers.

Bean was a notorious lawman who liked to make up his own rules in his judgments. One such case concerned the law forbidding the carrying of a concealed weapon. When a young man was arrested and accused of carrying such a weapon. Bean released him with the following logic.

"That charge won't stick," pronounced the judge. "If he was standing still when he was arrested he wasn't carrying weapons because he wasn't going no place. And, if he was not standing still, he was traveling, and it's legal for travelers to carry weapons. Case dismissed."

Although known as a “hanging judge,” Bean actually sentenced only two men to hang and one of them escaped. Horse thieves were usually hanged, but if they returned the horses and paid a fine, Bean let them go. 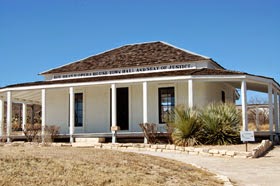 In addition to the saloon, Bean later built a home for himself behind it and called it the “Opera House” in anticipation of a visit by the famous actress Lilly Langtry. He claimed that he often wrote to her and allegedly she wrote back and even sent him two pistols. He also took credit for naming the town after her even though he hadn't.

He died in his saloon in 1903 with heart ailments without ever meeting his Lilly. Ironically, a year after his death, Lilly visited the town on her way from New Orleans to Los Angeles. The townspeople told her numerous stories of Judge Roy Bean, and she appeared to enjoy them.

Although he was buried in Westlawn Cemetery in Del Rio, Texas, the number of visitors to the site prompted the removal from there to a re-burial behind the Whitehead Memorial Museum in the same town. 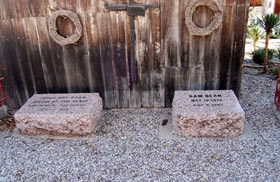 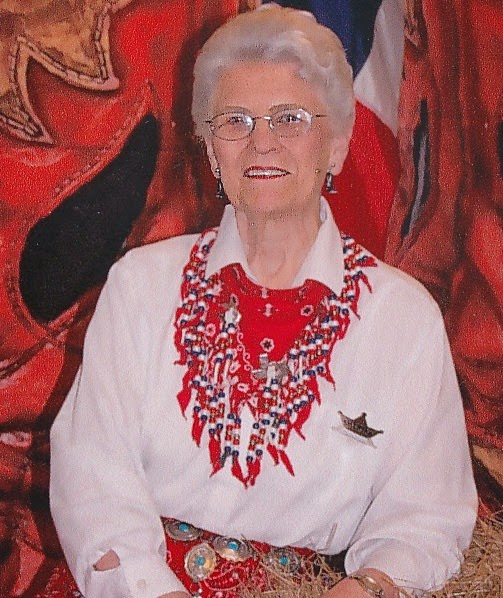 Martha Rogers is a free-lance writer and was named Writer of the Year at the Texas Christian Writers Conference in 2009 and writes a weekly devotional for ACFW. Martha and her husband Rex live in Houston where they enjoy spending time with their grandchildren.  A former English and Home Economics teacher, Martha loves to cook and experimenting with recipes and loves scrapbooking when she has time. She has written two series, Winds Across the Prairie and Seasons of the Heart as well as several novellas. Love Stays True and Love Finds Faith, the first two books in her new series, The Homeward Journey, are available now with book number three being released this month.
Posted by Martha W. Rogers at 1:00 AM