Leadville - a Town at the Top of a Mountain

A few years ago, I visited Leadville, Colorado, and was impressed with it’s quaint and colorful Victorian homes, majestic scenery, it’s historic buildings, and fascinating history. At an elevation of 10,430 feet, Leadville was often called “The Two Mile High City” or “Cloud City,” both fitting names. Located at the foot of two of Colorado's highest peaks, Mt. Elbert and Mt. Massive, Leadville is one of America's last remaining authentic mining towns.

Leadville was founded in 1877 by mine owners Horace Austin, Warner Tabor, and August Meyer, setting off the Colorado Silver Boom. By 1880, Leadville was one of the world's largest silver camps, with a population of over 40,000, and the second most populated town in Colorado.

The desperate townspeople proposed a mammoth ice castle with the hopes it would draw sightseers, create jobs, and rescue the town's sagging economy. Charles E. Jay, an architect who had designed an ice palace in St. Paul, Minnesota, was hired as the designer, and Tingley S. Wood was hired to build the ice palace. The Leadville Ice Company won the contract to produce the ice. 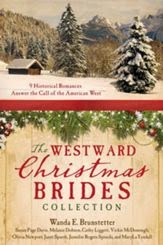 Beth Ruskin, an Orphan Train agent, has one more child to find a home for, then she and her father will travel to Arizona, where he plans to set up a doctor’s office. But a freak storm causes an unexpected delay in Texas. Beth prays she can find a home for sweet Lizzie, who has been rejected by more than one set of potential parents because she wears glasses. Beth problems magnify when a big blacksmith gives her his three-year-daughter after she is injured in his smithy. Can Beth get Cade Maddox to see how much his daughter needs him and find a home for Lizzy, all before Christmas?

Vickie McDonough is the best selling author of 34 books and novellas. Her novels include the fun and feisty Texas Boardinghouse Brides series and the 3rd & 6th books in the Texas Trails series. Her novel, Long Trail Home, won the Inspirational category of the 2012 Booksellers’ Best Awards. Song of the Prairie, the final book in her Pioneer Promises series, set in 1870s Kansas, recently released. Vickie had three Christmas novellas in collections releasing this fall: Westward Christmas Brides, The Christmas Brides Collection, and The 12 Brides of Christmas. To learn more about Vickie, visit her website: www.vickiemcdonough.com
Posted by Vickie McDonough at 12:30 AM