Pilgrims and Puritans--What's the Difference?

My history students often want to know the difference between the Pilgrims and Puritans, so I dedicate this story to both groups as we near Thanksgiving when they are much on our minds. 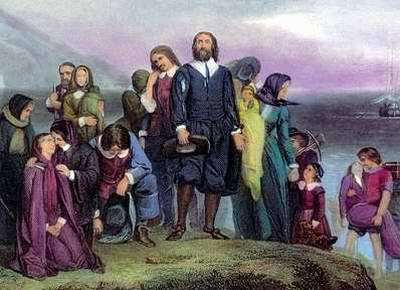 Let’s go back to the reign of Elizabeth I. After her Roman Catholic sister Mary’s rule, Elizabeth reinstated Anglicanism as England’s official religion. However, a small group of highly educated people struggled with the similarities they saw between the Church of England and the Roman church. Known as the Puritans because they desired to purify Anglicanism, they objected to the clergy’s elaborate liturgical robes, as well as the use of candles, incense, and music in services, all which they believed were distractions from true worship. Instead, the Puritans stressed the importance of Bible study and desired to make God’s Word accessible and understandable to ordinary people.  They also believed deeply in the doctrine that faith alone, as opposed to good works, could get a person to heaven.

At that time, many Puritans believed the Anglican Church could be reformed from within, but another group of them wanted to separate from it because it was too corrupt. These “Separatists” or “Pilgrims” left England in 1606 for Leyden in Holland in order to practice their beliefs unencumbered by the state church. 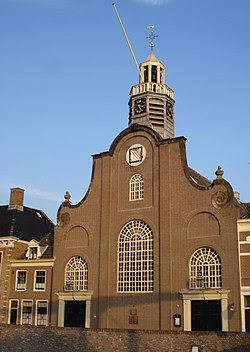 They enjoyed a dozen years of relative peace, but they had struggled with finding more than menial employment because of their immigrant status.  The Pilgrims decided to seek a place where they might have full religious liberty and live above a subsistence level.  In 1620 the Pilgrims made the decision to come to America, sailing from England in the fall after several unfortunate delays. It was the worst time of the year for The Mayflower’s voyage, but it couldn’t be helped.

After a tumultuous 64-day journey across the Atlantic, they arrived at Cape Cod on November 9, committing themselves to a compact, or written agreement, that would lead away from the rule of kings and queens toward democratic self-government. The Pilgrims settled at Plymouth where they constructed primitive huts in which to weather the cruel Massachusetts winter, and many fell sick, leading to the deaths of over half the 102 immigrants.

"If they looked behind them, there was the mighty ocean which they had passed and was now as a main bar and gulf to separate them from all the civil parts of the world. . . . What could now sustain them but the Spirit of God and His grace? May not and ought not the children of these fathers rightly say, 'Our fathers were Englishmen which came over this great ocean, and were ready to perish in this wilderness; but they cried unto the Lord, and He heard their voice and looked on their adversity. . . .'” 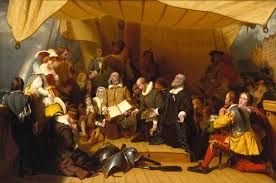 Considering that the group of mostly peasants, town laborers and shopkeepers were ill-suited to life in the wilderness, they came through their ordeal remarkably well. As Bradford put it, “they knew they were pilgrims, and looked not much on those things, but lift up their eyes to the heavens, their dearest country.” Another Pilgrim said, “It is not with us as with other men, whom small things can discourage, or small discontentments cause to wish themselves at home again.”

In the meantime, conditions in England became progressively worse in general, and for the Puritans in particular.  Nor was the church they loved about to be reformed. People’s behavior had deteriorated, the streets were polluted with human waste, and life was cheap. According to Peter Marshall and David Manuel, “England had become a nation without a soul. A beggar could die of exposure in a merchant’s doorway, and the merchant, arriving to open up in the morning would be irate at having to step over the body. . . .”

Under James I’s successor, Charles I, the Puritans suffered persecution, and many went to prison. (Think John Bunyan and Pilgrim’s Progress.) In 1628 the Council for New England issued a grant to a group of Puritans to establish a settlement between the Charles and Merrimack Rivers in Massachusetts, and 66 men ventured there, later to be joined by 200 more men who would begin to form the Massachusetts Bay Colony. A lawyer named John Winthrop was elected Governor and followed with his own set of colonists. 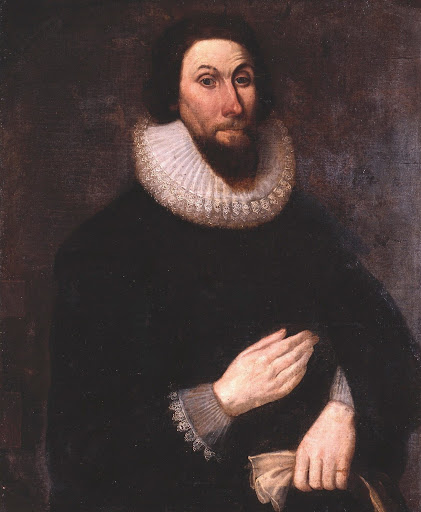 The Puritans viewed New England as a New Canaan, a promised land that God would use as an experiment in Christian living, “a city upon a hill” for all the world to see. Halfway between England and the New World, Winthrop preached a sermon, “A Modelle of Christian Charity,” on the deck of the Arbella. With an ocean breeze stirring his dark hair, he proclaimed: 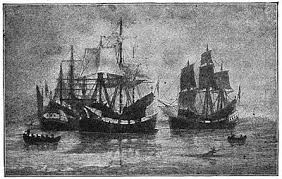 "We must Consider that wee shall be as a Citty upon a Hill, the eies of all people are upon us; soe that if wee shall deale falsely with our God in the worke wee have undertaken and soe cause him to withdrawe his present help from us, wee shall open the mouthes of enemies to speake evill of the ways of God and all professours for Gods sake."

When the Puritans reached the shores, they found the settlement in a dilapidated state, with only 85 of the nearly 300 men who’d gone before them remaining--the others had died or turned back. Under Winthrop’s leadership, however, the Puritans established a firm foundation for themselves and all who would follow them. The Puritans quickly outnumbered the Pilgrims in the new land, and by the late 17th century, had absorbed their numbers.

Tell me, are you related to any of these early English settlers to America? If my research is accurate, then some of my family members were Puritans who came here in the early 1630s. One of my DAR friends can trace her lineage back to Captain Myles Standish, who came over on the Mayflower! I would love to hear your story.

Rebecca Price Janney is a theologically trained historian whose 18 published books deal mainly with people and themes in America history, including Great Stories in American History, and Then Comes Marriage? A Cultural History of the American Family. She lives in suburban Philadelphia with her husband and son. www.rebeccapricejanney.com