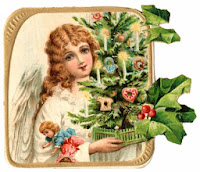 “Ah! Don't you remember, 'tis almost December,
And soon will the holidays come;
Oh, 'twill be so funny, I've plenty of money,
I'll buy me a sword and a drum.”

A myth about the regency is that, despite the hedonism and reckless abandon its denizens are known for, Christmas was hardly celebrated, if observed at all. After all, ask anyone about a Victorian Christmas and there are no shortage of ready responses. There is, in fact, a near global awareness of Victorian English Christmases past, thanks to Dickens and his “Christmas Carol.”  But ask about a REGENCY Christmas, and most people will give you a blank stare. Yet, where did the Victorians get their traditions?

Some of them were new, such as the ceiling-high Christmas tree*  and the sending of Christmas cards; but the facts clearly indicate that the lion's share of English Christmas customs and traditions were centuries old, and not abandoned during the regency.

The misconception is understandable, if you take into account the fact that we have diaries from the early 19th Century of Christmas days where the writer mentions the day but makes absolutely no fuss about it.

Likewise, there are records of newspapers published on 25th December that do not
even contain the word, Christmas. So if Christmas was indeed alive and well, why the discrepancy between the great ado we see in a Victorian Christmas and that of the (relatively) obscure Regency ones?

The answer to that question is simpler than you may suspect, and is the reason why I wrote my book, REGENCY HOUSE CHRISTMAS: The Definitive Guide to a Remarkably Regency Yuletide. It's really a celebration of Christmas past in a book. (If you receive my newsletter, you know how I love wonderful art and illustrations and poetry--the Christmas book is full of them.)

But without reading the book, here's some food for thought: Christmas Day itself only became a national holiday in England in 1834--four years after the death of George IV, (earlier, the Prince Regent) and four years before the young Princess Victoria became queen. The Victorian era saw a huge increase of a middle class--people who had money they could spend for a Christmas celebration. Both were reasons for the surging popularity of Christmas Day.  But it was, nevertheless, alive and well during the Regency. There really were Regency yuletide celebrations and gift-giving and church going and more!

As a special bonus this month, pick up my PDF "Regency Fashion in Winter."  Shawls, redingotes, pelisses, coats--what did a regency miss wear to keep warm? Find out in this free download.

...
Linore Rose Burkard is best known for her Regency Romance Trilogy.
Download the index to Regency House Christmas: The Definitive Guide to a Remarkably Regency Yuletide! Here, to see the full list of everything included in the book.

*The ceiling-high Christmas tree was new to England, but it was ages old in Germany. Interestingly, it was Queen Charlotte (George III's wife) who first brought it to England, around 1800. But it didn't take off as a firm custom until much later when a newspaper illustration of Victoria and Albert's big tree went national. Albert, like Queen Charlotte, was Germanic and wanted to continue the custom he grew up with, of having a tall tree for Christmas. (Prior to that, if people used a tree at all, it was generally a table-top affair, no more than a few feet high at most.)
Posted by Linore Rose Burkard, Novelist at 1:30 AM