I'm a fan of mixing real life events from history with plots and characters that I make up. The technique gives verisimilitude to stories and enriches them, giving your stories "bones". It can be virtually anything, but on a recent trip with my husband, we saw the evidence of a fairly recent event that I'm sure will be the fodder for many stories in the future. I'm speaking of the Nashville flood of 2010 where the Cumberland River crested at nearly 52 feet, the highest since the 1930s. Much of Nashville had flood damage with major flood waters in the OpryLand Resort area and Grand Ole Opry House.

Max and I took the backstage tour of the Opry, and after viewing the stars dressing rooms, we were directed to the "family room", the Opry version of television land's "green room". In this vast, comfy room, though, there is a reminder of a darker time for the Opry. Look closely on the left side of the picture. There's a dark line about halfway up that looks like a decorative element, but what it is is the line of the floodwaters that filled the Opry Hall in 2010. The factoid would make a nice addition in a story, don't you think? 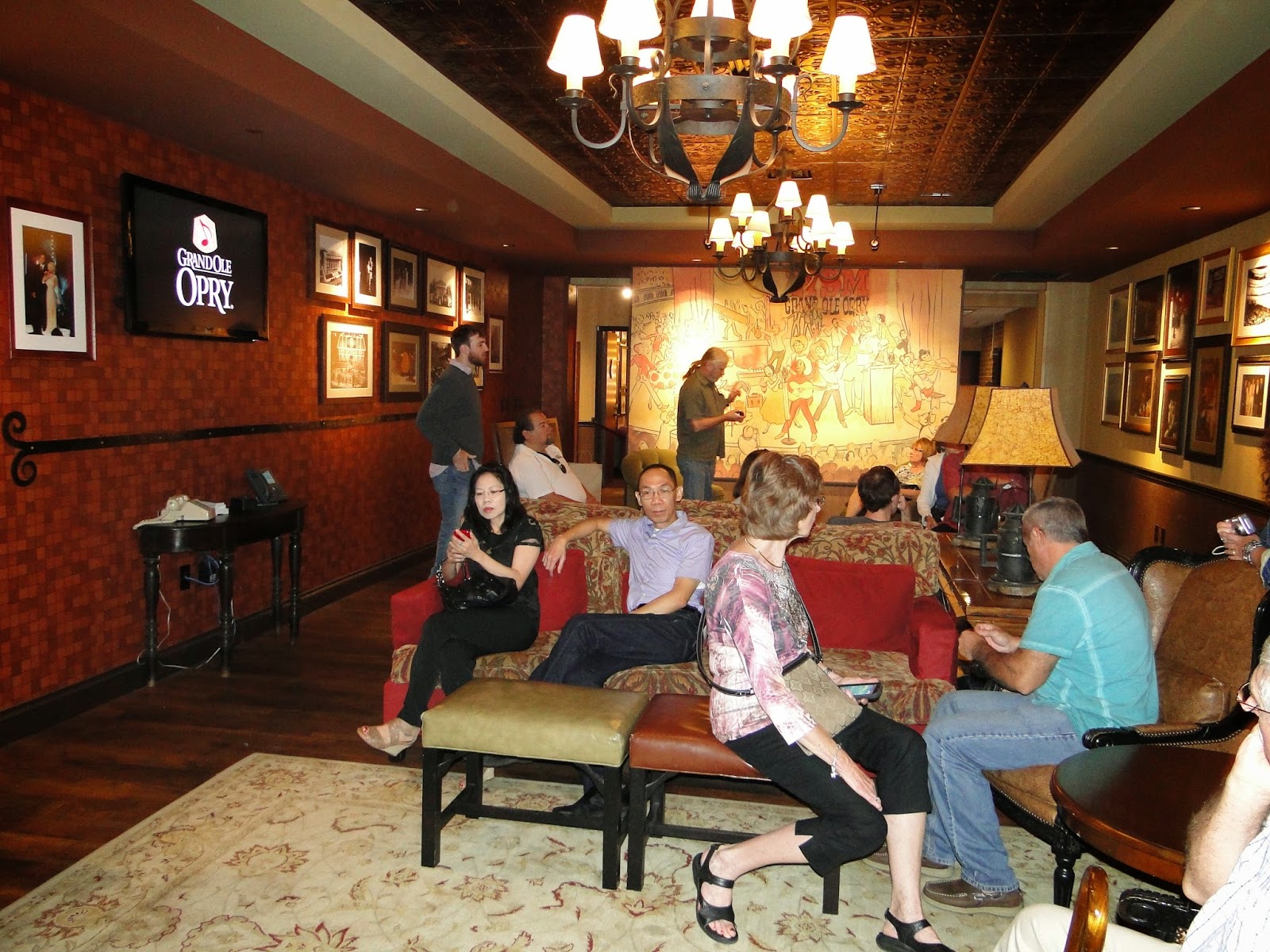 This stuck with me because I had used a similar incident to the Nashville flood in the book I have coming out next summer. It's just a mention a few times in the novel of the 1927 Mississippi flood that I discovered as one of the events near the time of my story. I used it to show that ladies and church societies worked to provide relief for the victims who were not only left homeless, but had to live in deplorable conditions.

Out of curiosity, I searched for significant floods in the US over the last 100 - 150 years. Any of these would be great fodder for plot/story ideas and looking at pictures even gives more wings to the imagination. I can imagine tent cities, panic as the storms rage, families torn apart or children separated from their parents, political chaos as rebuilding begins, the nursing/care of those who are wounded (budding love affairs, anyone?), triumphant reunions for those who were thought to be lost and are found. Here are some of the more significant ones with photos:

Place: Johnstown, Pennsylvania.
Flood details: Ten inches of rain fell in a little less than 24 hours, causing a local dam to break. The result? A wall of water 30 feet high raced to town at speeds of up to 40 miles per hour. As telephones were in their infancy, there was no warning system.
Death Toll: More than 2,200


Place: Galveston Island which all but disappeared during the hurricane surge.
Details: Category 4 hurricane. Storm surge of 16 feet on an island whose highest point was only nine feet. Property damage est. at $30 million.
Death toll: Estimates death range between 6,000 and 12,000 (of 40,000 Galveston inhabitants)


Place: along the Mississippi River at several locations. One of the most powerful natural disasters of the 1900s. Following several months of unusually heavy rain, the Mississippi spilled from her banks. It was over 80 miles wide at some locations.
Details: A levee failure at Mounds Landing, Mississippi, resulted in river flow with the force of Niagara Falls. An area the size of Connecticut was under water. Ten feet of water covered towns up to 60 miles away from the river. Even after 5 weeks, the area around Mounds Landing was covered with 100 feet of water. Affected area: 27,000 square miles (The size of New England).
Damage: Over 130,000 homes were lost and 700,000 people were displaced. Property damage estimated at 350 million dollars (equivalent to approx. 5 billion dollars today).
Death toll: 246

Other more recent floods include:

One of the most debilitating natural disasters to ever hit the United States, Hurricane Katrina struck the Gulf Coast on August 29, 2005 and its effects are still felt, more than eight years later. More than 80 percent of New Orleans flooded, and the waters did not recede for weeks. The costliest natural disaster in U.S. history—New Orleans and the surrounding communities suffered $81 million in damages—also killed more than 1,800 people.

I'm not sure about you, but I can almost feel caked-on mud, thirst from having water all around but not knowing if it's suitable to drink, slimy crawly things in the water, and the worst agony - separation/not knowing about your loved ones.

While I've never been in a flood and hope never to be, by taking a trip in my imagination, I can conjure up a host of story ideas replete with action and drama.

Stay warm and dry, my friends! Next month I'll talk about something really fun!

Chat Time: Have you ever been in a flood? Can you share your experience? Do you like to read stories that have weather/natural disasters in them?

Carla Stewart is the award-winning author of five novels. With a passion for times gone by, it is her desire to take readers back to that warm, familiar place in their hearts called “home.” Her newest release is The Hatmaker's Heart. In New York City’s Jazz Age, a naïve, but talented young hat designer must weigh the cost of success when the rekindled love with her childhood sweetheart is lost and her integrity in the cutthroat fashion world is tested.