Christmas in a Nebraska Soddy

A "footnote from history"
by Stephanie Grace Whitson

Christmas memories abound in the diaries and reminiscences of sod house pioneers. Many pioneers praised those homes for being “warm in winter and cool in summer.” What was Christmas like for them?

Ten-year-old Ella Oblinger wrote to her grandparents about her 1879 Christmas in a Nebraska soddy:

"I got a new red oil calico dress I will send you a piece of them a each one of us girls got a doll and uncle Giles put a book on for Sabra and me & each one of us girls a string with candy and raisins on it. Christmas day we all went to uncle Gileses & New Years we were invited to a New Years dinner up to Mr Bumgardners. I eat till I nearly bursted eating oysters & good things. Christmas night I got pair of stockings & a nice new book called the three white kittens & Sabra & Maggie both got a new pair of stockings & primer books & New Years all of us girls got a candy apple a peice & a  paper sack of   mixed candy & a paper sack of raisins"

Early in the 20th century, Viva Pedrick Klanecky wrote of “a special Christmas.”

"Lilas and I received dolls which Mother had made. She bought the china heads and made the bodies and dressed them. Lilas is nearly two years older than I, but needless to say this was really one of our best and most exciting Christmases, as these two little girls had never had a doll before."

Charles S. Reed remembered:
… Every year our household would know what was coming when my English mother started getting things together for her famous puddings … Our Christmas celebration was always at our church … We never received any presents at home.
The day before Christmas was all hustle and bustle, with mother gathering up mysterious looking packages … All of us took our turns taking a “stand-up” bath in a wash tub behind a curtain in the corner of the warm kitchen … Our ride to church was in a Newton lumber wagon, with sideboards on to break the wind. Dad would throw some prairie hay into the wagon box, whose front end was piled with packages and mother’s precious puddings … [I’ve posted an 1896 recipe for Plum Pudding at www.stephaniegracewhitson.blogspot.com]
Dad always “got us to the church on time.” There under kerosene lamps, things really were jumping. On the platform there was a hand cut cedar tree … decked out with handmade paper dolls, angels, stars, spangles, animal crackers, ribbons, and tinsel. The tree was lit with real candles. The final touches were festoons of cranberries and popcorn strung on a thread. Before we could have our presents, there always had to be a program. The bright kids hastily recited Christmas pieces. There were always squeaky carols by the angelic looking small-fry. 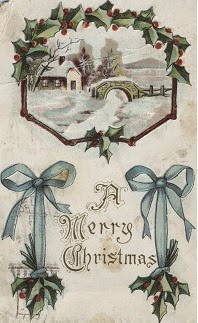 Finally everyone was seated—the grownups in the pews, and the youngsters squatting on the floor in front of the tree. The preacher would read the story of the Christ Child, and at the appropriate moment, Mrs. Finch at the piano, would break into “Jingle Bells”, then the back door of the church would open, and in burst Santa Claus, waving his arms, and wishing us all a Merry Christmas, amid squeals of juvenile delight. Santa would pat his round little belly, and pick out a couple of small helpers, who would hand him packages so he could … read the names in a loud voice … Few presents were luxuries. Most of them were things like shoes, pants, coats, socks, gloves, handkerchiefs, shirts, or ties. Some of the presents were made over “hand-me-downs” from the older kids. I was never ever more tickled than when I unwrapped my older brothers’ first base mitt.
After the presents were all given out every child was given a small paper sack filled with candy and one orange. After Santa wished us Good Night, the families took time to visit. Meanwhile, dad was putting hot soapstones wrapped in blankets in the hay. When we were ready, he took the blankets off Snip and Barney, after which we loaded up and headed West … Before we “passed out” on the way home, we could hear bells jingling on the harness, and louder still, dad singing folk songs and carols on his lonely perch way up on the spring seat. If he was short on melody, he made up for it in volume.

What special food says “it’s Christmas” to you?
What about music?
Do you have a musical memory of the holiday that’s especially meaningful?

May your Christmas be bright,
Stephanie Grace Whitson

Posted by Stephanie Grace Whitson at 1:47 AM