Daughters of the Regiment in the Civil War


A footnote from history by Stephanie Grace Whitson
To win a free copy of Stephanie's new book ... keep reading 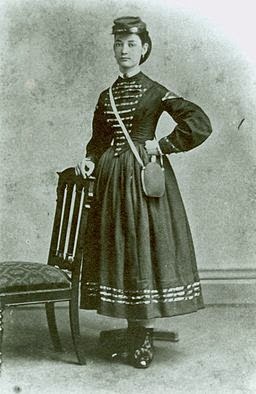 The October 9, 1862, edition of the Nashville, Tennessee Daily Union reported an incident wherein a young woman disguised as a soldier and hoping to serve with the Irish Legion had been found out. Instead of being sent home, however, Eliza Miller was allowed to stay, " ... accepted as a female appendage to the regiment." Eliza was one of many women who, like the unknown woman pictured at right, served during the Civil War as an American version of vivandieres and cantinieres, French women who, as part of their service during the Crimean War, carried water to the wounded on the battlefield.

A number of women in both the Union and the Confederate armies earned the title "Daughter of the Regiment." Historian Elizabeth D. Leonard says that "daughters" were probably initially seen as a kind of mascot, "guardian angel," or nurse. However, the realities of war (and the strength of the women so named) expanded their roles. Daughters of the Regiment did much more than carry water and tend the wounded. Some rallied their men to fight, carried the regimental colors on the march (and sometimes in the field). Others took part in battles.

Among the women known to have served as Daughter of the Regiment are: Kady Brownell of the 1st and 5th Rhode Island, Lucy Ann Cox of the 13th Virginia, Bridget Divers of the 1st Michigan, Annie Etheridge of the 3rd and 5th Michigan, Hannah Ewbank of the 7th Wisconsin, Jane Claudie Johnson of the 1st Maryland, Lizzie Clawson Jones of the 6th Massachusetts, Belle Reynolds of the 17th Illinois, Rose Quinn Rooney of the 15th Louisiana, Sarah Taylor of the 1st Tennessee, and Nadine Turchin, of the 19th Illinois.

Letters and reminiscences pay tribute to these women:

"She is always on hand and ready to bear the same privations as the men. When danger threatens, she never cringes."

"She is always to be seen riding her pony at the head of our Brigade on the march or in the fight."

"The balls fall thick and fast around her, but she fears them not, and performs her task as cooly as if she was in camp and out of danger."

"She had not slept for 48 hours, having worked incessantly dressing wounds."

"She has been riding with the cavalry all the time ... always ready to succor the wounded on the field ... often getting men off who, but for her, would be left to die, and fearless of shell or bullet among the last to leave."

"Hundreds of soldiers ... will never forget the work of charity and bravery that Mrs. Reynolds is doing, single-handed, these days."

" ... how we all respected, believed in, and came to love her for her bravery, gentleness and constant care of the sick and wounded in the Regiment."

"...manifesting perfect indifference to shot or shell, or minie-balls, even when they fell thickly around her, she led the troops into action, facing the hottest fire, and fought bravely at their head."

Annie Etheridge of Michigan was awarded the Kearny Cross in recognition of her service. After the war, she was granted a pension for her wartime service. She is buried in Arlington National Cemetery--an exceptional honor. 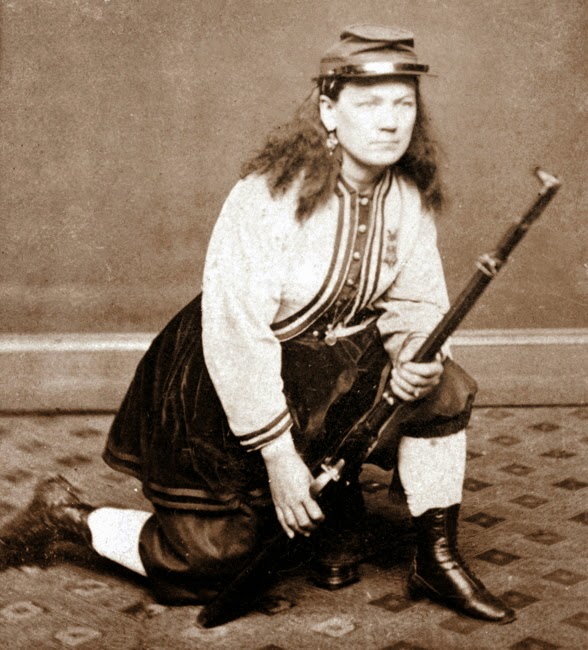 Kady Brownell of Rhode Island (pictured at left) is the only female to have received official discharge papers from the Union Army. After the war, she was accepted as a member of the GAR and received a pension for her service.

Kady's uniform reminded me of the costumed doll I photographed at the Illinois State Museum in Springfield, Illinois, when I was researching my Daughter of the Regiment. She's a cantiniere in zouave costume. (Zouaves were part of the French military in 1830 Algeria who adopted Moorish costume.) Because the Zouaves were known as fierce warriors, many Civil War regiments adapted the style for their uniforms. It's easy to see how the uniform would have inspired Daughters of the Regiment to shorten their skirts and don pantaloons in order to be more suitably dressed for military maneuvers. 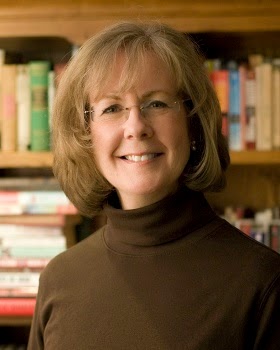 Best-selling, award-winning novelist Stephanie Grace Whitson wrote her first historical fiction in the 1990s while home schooling her four children and learning the true stories of the pioneer women of the West. She celebrated her twentieth years as a published novelist in 2014. In addition to writing, she enjoys giving programs on a variety of historical and inspirational topics for civic organizations and church groups, quilting, learning about women of the past, and riding her Honda Magna motorcycle named Kitty. 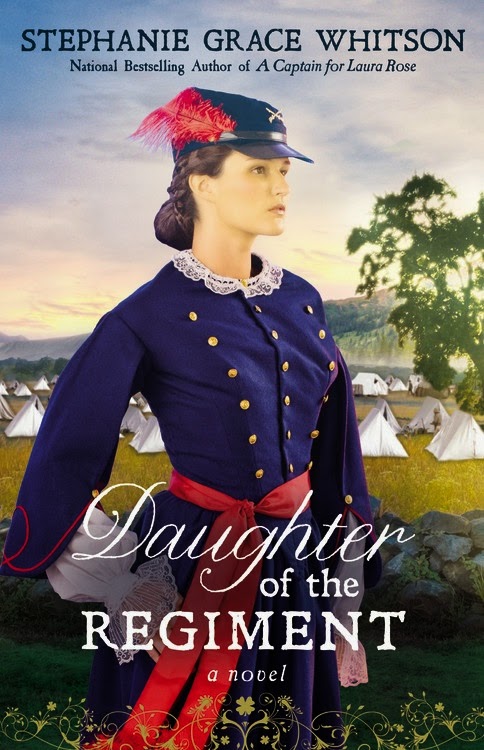 Stephanie's newest book, Daughter of the Regiment, is set in Missouri during the Civil War and tells the story of Irish immigrant Maggie Malone and her neighbor, Elizabeth Blair, the mistress of Wildwood Grove plantation. When military maneuvers and a subsequent battle bring the Irish Brigade (and Maggie) to Wildwood Grove, Libbie's home is commandeered as a field hospital. The two women whose brothers have fought on opposite sides of the same battle come face to face while tending the wounded in the aftermath of a battle won by Union troops.

Stephanie is giving away three free copies of Daughter of the Regiment. To be entered to win, go to www.stephaniewhitson.com between March 12 and March 20, 2015, and subscribe to Stephanie's newsletter. Winners will be contacted via e-mail on March 21 (and announced here at HHH).