One Woman’s Fight for Justice and Change

Before the mid-nineteenth century, women’s rights were unheard of. In most of the United States, married women were forbidden to own property, have a bank account, or own a business. A husband could sell, gamble, or give away all of his wife’s possessions without her knowledge or consent. Her husband legally controlled a woman’s children and health care. My goodness, we have come a long way, haven’t we?

Elizabeth Parsons Ware Packard was born December 28th, 1816, the oldest, and only daughter of the Reverend Samuel and Lucy Ware.

In 1839, Elizabeth’s father insisted she marry Theophilus Packard. A minister, who was fourteen years Elizabeth's senior, Mr. Packard was a staunch leader of his church. Elizabeth and her new husband appeared to have an amicable life together.

After twenty years of marriage, Elizabeth began to speak out publicly against her husband’s strict religious views. In response, Theophilus declared her “slightly insane” and secretly arranged for Dr. J.W. Brown to evaluate her.

The doctor pretended to be a sewing machine salesman. During his visit, Elizabeth complained of her husband’s religious views and that he had told others she was insane. The "good doctor" gave his report to Mr. Packard, and on June 18th, 1860 the sheriff came to Elizabeth Packard's home and arrested her.

Without an official trial, Elizabeth Packard spent the next three years at the Jacksonville Insane Asylum in Jacksonville, Illinois.


Finally, after public outcry and pressure from her six children, she was granted a trial.

The judge and jury declared her falsely imprisoned. The asylum doctors officially (and falsely) recorded her diagnosis as “incurable” and thus, released her.

Upon returning to her family’s home, she found her husband had recently rented it to another family, sold all her furnishings and belongings, and moved her children to another state. 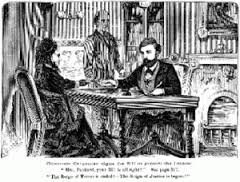 Elizabeth took her husband to court The final witness in Elizabeth's case was Dr. Duncanson, who was both a physician and a theologian. Dr. Duncanson interviewed Elizabeth Packard, and he testified that while not necessarily in agreement with all her religious beliefs—“I do not call people insane because they differ with me. I pronounce her a sane woman and wish we had a nation of such women."

The jury took only seven minutes to find in Elizabeth Packard's favor. She was legally declared sane, and Judge Charles Starr issued an order that “she should not be confined”. Mrs. Packard had won.

Elizabeth never returned to her family, but she did, however, stay close to her children. As far as I can tell, she never legally divorced her husband.

Aware of how close she came to being incarcerated against her will, and that other women suffered the same fate, Elizabeth founded the Anti-Insane Asylum Society. 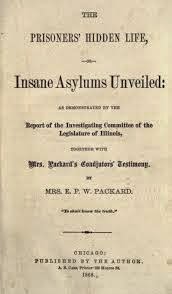 She also published several books about her experience, including Marital Power Exemplified, (or Three Years Imprisonment for Religious Belief) (1864), Great Disclosure of Spiritual Wickedness in High Places (1865), The Mystic Key (or the Asylum Secret Unlocked) (1866), and The Prisoners' Hidden Life, (or Insane Asylums Unveiled) (1868).

Elizabeth became a champion for the rights of women and people accused of insanity. Thanks to her hard work and persistence, in 1867, the State of Illinois passed a "Bill for the Protection of Personal Liberty". This bill guaranteed all people accused of insanity, including wives, had the right to a public trial. She also saw similar laws passed in three other states.

One woman’s life took a horrific, tragic turn that could have ruined her. But Elizabeth chose to rise above by blazing an early path for women’s rights and fair treatment. Elizabeth Parsons Ware Packard’s achievements deserve to be known and remembered, and I hope that Mrs. Packard’s story might inspire and empower you.

Do you have a story that might have been tragic, but you were able to turn it around to make "lemon-aid from lemons". If you feel comfortable enough to share, please do so in the comments below. I’d love to celebrate your victories with you!