The Battle of San Jacinto

Ten days from now, Texas will celebrate her independence from Mexico won at a hard fought battle now know as the “Battle of San Jacinto.” It is the birthplace of Texas liberty and was one of the world’s most decisive battles. Sam Houston and his ragged group of about 900 Texan pioneers attacked Santa Anna and changed the map of North American.

The story of the battle has thrilled Texas for well over a century and a half as it was a story of desperate valor and high adventure, hardship, romance, as well as tragedy. That battle established Texas, the Lone Star Republic. 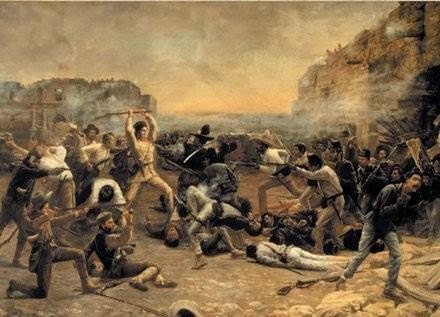 Almost two months before, the Mexican Army, led by Santa Anna, had defeated the men at the Alamo.Texas heroes like William B. Travis, Jim Bowie, and Davy Crockett lost their lives in the futile attempt to defend the mission in San Antonio. Even after more troops arrived from Gonzales, on March 6, 1836, after thirteen days of battle, the Texans and Tejanos at the Alamo went down in defeat.

“Remember the Alamo” became the battle cry of the Texas army as they headed for the battlefield near the coast where the Mexican army and Santa Anna were headed.

Although six years in the planning, the actual battle of San Jacinto lasted less than twenty minutes. Besides the Alamo, disturbances at Anahuac and the battle of Velasco set Texans on the road for independence. The imprisonment of Stephen F. Austin in 1834 and the capture of Goliad in 1836 all preceded the Alamo and created a fierce determination in the Texans to fight to the death.
The Texas Declaration of Independence at Washington-on-the-Brazos came into being on March 2, 1836 and officially signaled the revolution was to begin.

At dawn, April 20, the Texans resumed their trek down the bayou to intercept the Mexicans. At Lynch's ferry, near the juncture of Buffalo Bayou and San Jacinto River, they captured a boat laden with supplies for Santa Anna. This probably was some of the plunder of Harrisburg or New Washington. Ascertaining that none of the enemy forces had crossed, the Texans drew back about a mile on the Harrisburg road, and encamped in a skirt of timber protected by a rising ground.

Because of the premature actions of Colonel Sidney Sherman who attacked a small group of the infantry with his cavalry, a major battle almost ensued. As it was, one Texan was killed and another wounded. The actions of one Mirabeau B. Lamar helped avert tragedy and on the next day he was placed in charge of the cavalry.

On April 20, both sides made camp and set up barricades to protect themselves as they prepared for the conflict sure to come the next day. On Thursday, April 21, the Texans awakened to a clear day. They were eager to attack as they could see Santa Anna’s flags flying over the enemy camp, and  they heard the Mexican bugle calls.

General Houston had his own plan and kept the men occupied until the middle of the afternoon. About 3:30, the Mexican side lay quiet and still as the soldiers enjoyed their customary siesta. The Texans' movements were screened by the trees and the rising ground, and evidently Santa Anna had no lookouts posted. Big, shaggy and commanding in his mud-stained non-military garb, Houston rode his horse up and down the line. "Now hold your fire, men," he warned in his deep voice, "until you get the order!" 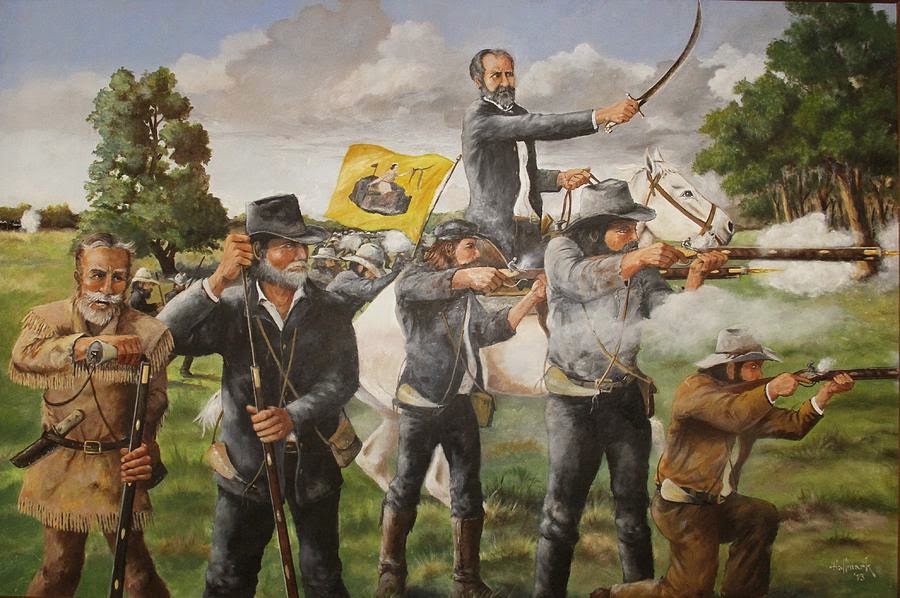 At the command, "Advance," the patriots, 910 strong, moved quickly out of the woods and over the rise. Bearded and ragged from forty days in the field, they were a fierce-looking band, but their long rifles were clean and well oiled.
Only one group of men belonging to Sidney Sherman wore uniforms. Edward Burleson, George Hockley and Henry Millard fought along with Sherman and Lamar. 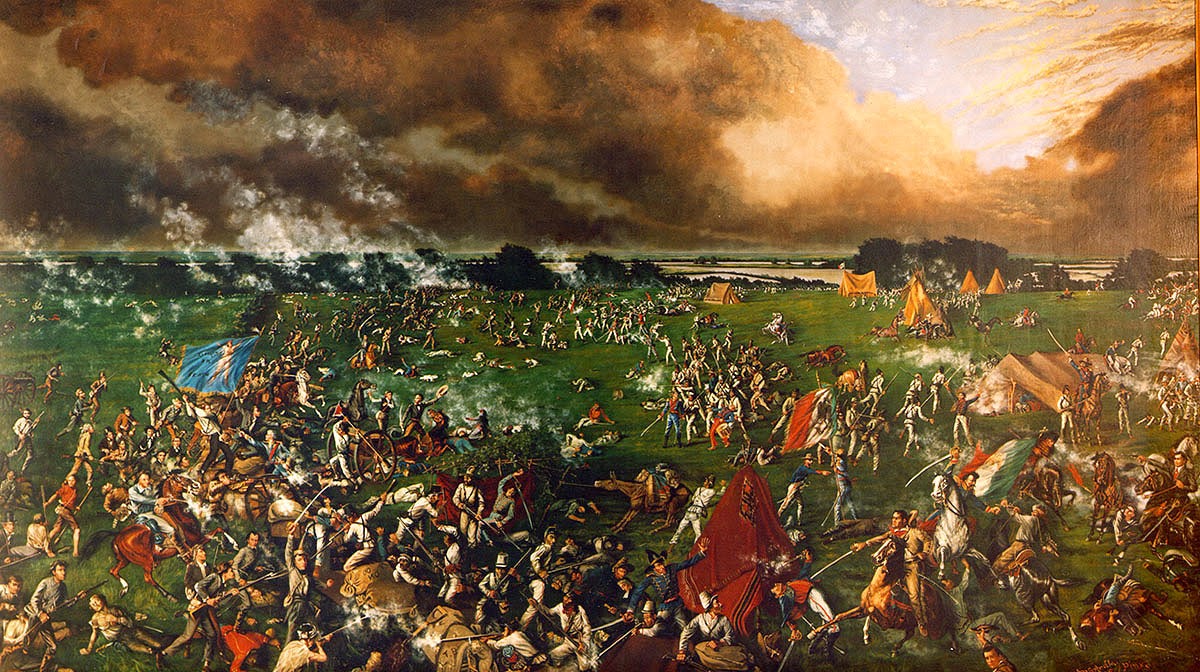 The Mexicans were so caught by surprise that they were soundly defeated in twenty minutes or so. Sam Houston became the great hero of San Jacinto, and on that day, April 21, 1836, Texas won not only the battle but also her independence.


On May 14, 1836, Santa Anna signed the Treaties of Velasco. The treaty insured him safe travel back to Mexico on his agreement o withdraw his troops from Texan soil. There, he promised to lobby for recognition of the new republic. Two treaties were signed that day, a private treaty and a public treaty. In the private treaty, Santa Anna pledged to try to persuade Mexico to acknowledge Texas' independence, in return for an escort back to Mexico. The treaty also set the Texas/Mexico boundary at the Rio Grande River. This was one of the issues later contributing to the 1846 Mexican War. After being held for six months in prison by the United States, he was finally taken to Washington, D.C. where he met with President Andrew Jackson. He finally returned in disgrace to Mexico in early 1837.

The independent Republic of Texas now received diplomatic recognition from the United States, France, Belgium, the Netherlands, and the Republic of Yucatan, all sovereign nations recognizing the new nation and its independence from Mexico. Even after the Republic joined the United States in 1845, Mexico maintained claims on Texas to the mid-19th century, until it was defeated in another war with the U.S. and was forced to sign the Treaty of Guadalupe Hidalgo in 1848. 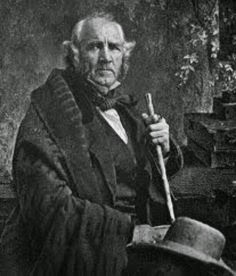 Sam Houston was the man chosen to be the first President of the Republic of Texas. 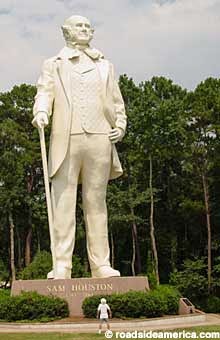 Today, a 67 foot tall statue of the hero of San Jacinto stands at the edge of Interstate 45 in Sam Houston State Forest between Conroe and Huntsville. Because it was once the Lone Star Republic, a recognized country, Texas could withdraw from the United States today and become its own country once again if the governor and the people voted for it. 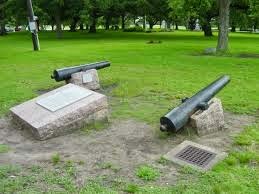 One interesting tidbit I remember from studying Texas history in the seventh grade is the story of the “Twin Sisters.” One key element missing for the Texas army was artillery. Funds were raised to build two cannons, and a foundry in Ohio built them then shipped them to New Orleans and from there they sailed on a schooner to Galveston. One Dr. Charles Rice and his family were on the boat and presented the cannons to Texas authorities under the sponsorship of his twin daughters, Elizabeth and Eleanor. Someone in the audience noted the fact of two sisters and two cannons and the cannons from then on were called the “Twin Sisters.” They fired the first volley into the Mexican camp. Where those cannons could be today remains a mystery because Dr. Rice died without revealing where they had been buried. Replicas were made from the memory of those who had actually seen the cannons before they disappeared because the foundry that made them had no descriptions of the cannons. These replicas can be seen on the site of the battle field where the San Jacinto Monument now stands.

Every year on April 21, the battle is re-enacted on the grounds where it took place. The monument houses a museum containing murals and relics saved from the battle. 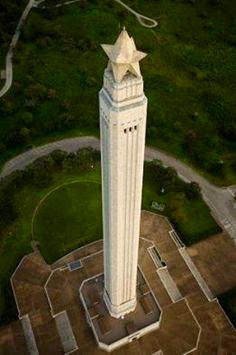 Texas has a rich and colorful history and I'm proud to be a fifth generation Texan with roots that go back to the early 19th century. 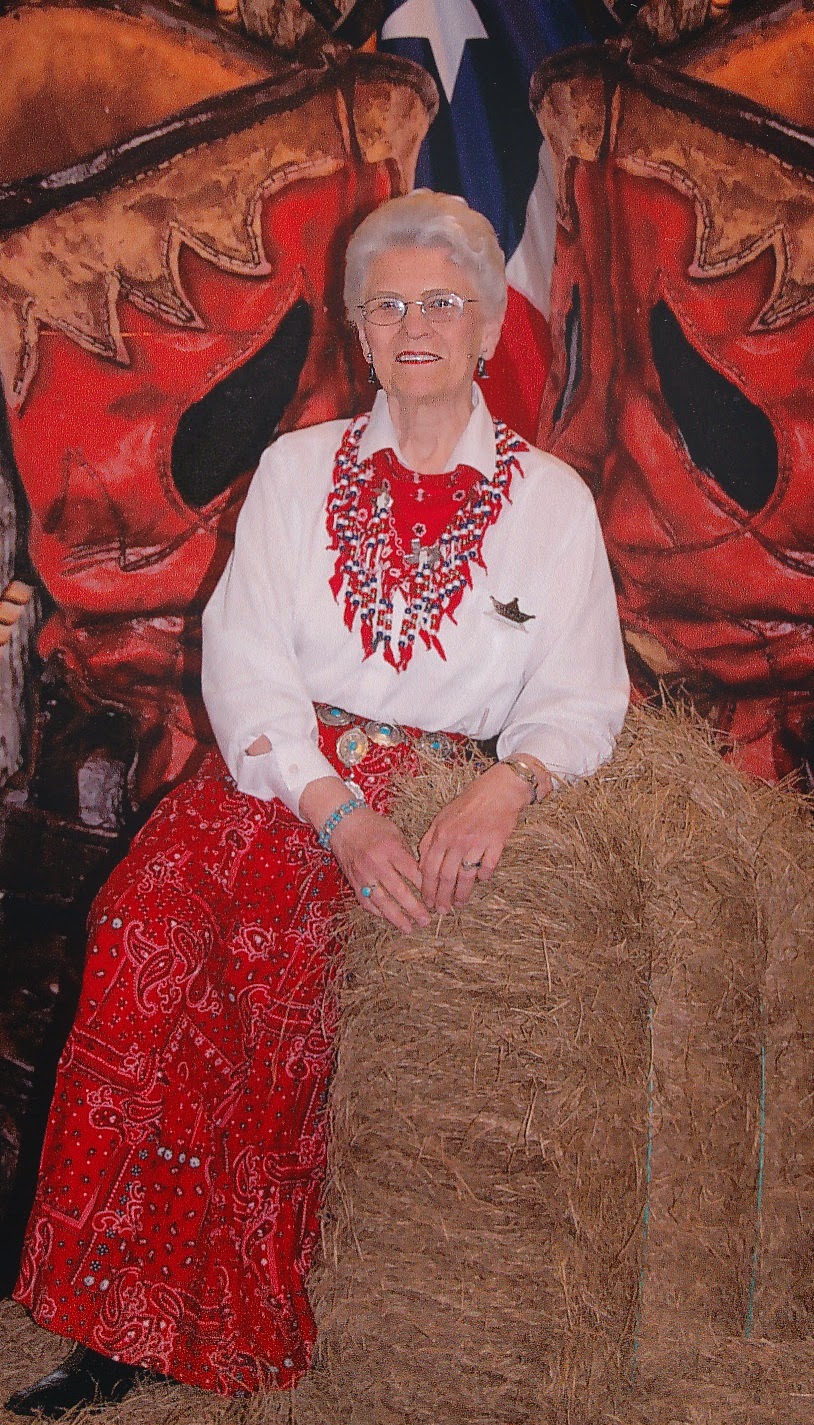