What In The World is "Chess Pie?"

In the opening scene of my Civil War novel, my heroine, a Southern gal, meets a Union officer at a church picnic when she serves him chess pie. In the final scene when he comes back to the South to claim her and marry her, chess pie is awaiting him on the porch. What I didn't realize in writing those scenes is that many of my readers from north of the Mason Dixon Line had no idea what chess pie is. I received several emails from readers asking me, "What in the world is chess pie?" So here's an explanation:

Chess pie is a traditional southern dessert from back as far as Colonial days. Southern women on the farm most of the time had to concoct a dessert from what they could find around the house. It is a simple dish consisting mainly of sugar, eggs and cream which still finds its way on Southern tables today, especially on holidays. Extra flavoring such as lemon juice, or cocoa, or coconut, can be added according to one's tastes. Chess pie, in the form of buttermilk pie, is always one of the dessert selections at the Parsons household.

Several explanations surface upon research about the name. Some say it was originally "chest pie," because it kept well in a chest, not needing refrigeration. (I always refrigerate mine.) Some say it was similar to cheese pie (or cheesecake) in the 1800's and the name gotten shortened to chess pie. Some claim it is simply the Southern drawl of a charming Southern belle declaring, "Well, I do declare, it's jes pie." (Just pie.) However the name came about, I can tell you it is absolutely yummy ... and easy on top of that.

Here's the recipe I've used for over 40 years which I got out of Southern Living Magazine. This recipe makes two 9" pies 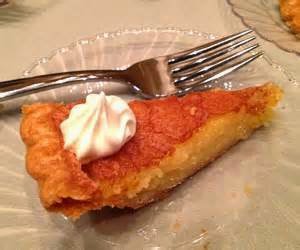 Buttermilk Pie
2 unbaked 9" pie shells
Mix until light:
6 eggs
3 cups sugar (I usually cut this down to about 2 1/2 cups.)
2 sticks real butter, softened
Add: 2 Tbs vanilla and 1 cup buttermilk
Pour into the pie shells. Bake at 350 degrees for 10 minutes. Reduce oven to 325 degrees and bake for 30 minutes or until firm in the middle. To test dip the blade of a dinner knife into the middle and when it comes out clean, it's done. Let cool before cutting.

One tip -- don't tell people it's buttermilk pie, until they taste it. Most will turn up their noses at hearing "buttermilk." Tell them it's Chess Pie. You won't be lying. It truly is, and they will already be hooked by the time they learn it's Buttermilk Chess Pie. Hope you'll try it. Enjoy!

Golden Keyes Parsons is a popular conference and retreat speaker, as well as an historical fiction author. Her first three novels, In The Shadow Of The Sun King, Prisoner of Versailles, Where Hearts Are Free, were based on her French ancestors who fled religious persecution in 17th century France. Her fourth novel, His Steadfast Love, is a Civil War novel set in Texas. Her fifth novel is a compilation of four biblical fiction novels, Hidden Faces: Portraits of Nameless Women in Scripture. Her first non-fiction, Spiritual Spring Cleaning will be released in May of this year.