BEHIND THE SCENES IN BIBLICAL FICTION - THE ADULTEROUS WOMAN

I can remember the first time I read a biblical fiction novel. It was Marjorie Holmes's Two From Galiliee. which was the love story of Mary and Joseph. I was mesmerized. I gave the book to a friend declaring she would absolutely love it ... but she hated it. Upon inquiring of her why she did not like the book, her reply was that it made Mary and Joseph too human. That was what had captured my heart.

While doing the research for my novella collection of nameless women in the Gospels, I ran across
item after item that did indeed make the biblical characters human, but gave me a deeper 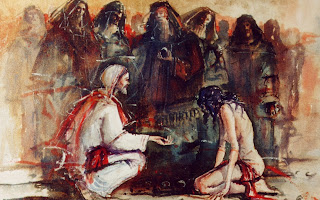 understanding of who these women were. For example, I had always thought the adulterous woman was a prostitute. However in doing the research, many scholars believe she was a betrothed virgin. The reason given for this viewpoint was the very logical conclusion that if the woman was a prostitute, what grounds did the Pharisees have to accuse her of adultery? Prostitution was widely practiced in Jesus's day. Many of the very men who brought her before Him were most probably regular customers of prostitutes. No, in order for them to trap Jesus, they needed an iron-clad case of adultery. It had to be a married woman with someone besides her husband. A betrothed virgin would suffice as betrothal in this day and time for the Jews was as binding a marriage.

Secondly, it was a trap, a set-up. Someone had made a deal with the Pharisees to participate in this despicable scheme in order to trap Jesus. If He agreed to stone her, then they would say He couldn't be the Messiah because He was not compassionate. If He were to say, "Let her go," they would again say He couldn't be the Messiah because He wasn't upholding the Law. So this young girl had been lured by some means into committing adultery in order to trap Jesus. Another incriminating piece of information it was a trap is the fact that her partner was not brought before Jesus. The Law stated both partners were to be presented before the priest. Where was he? Possibly gloating over his successful venture counting the money he was paid by the conspirators.

Another interesting tidbit of research concerns the age-old question: "What was Jesus writing in the sand?" In Numbers 5:11-31 there is a curious custom called "the law of the jealous husband." If a 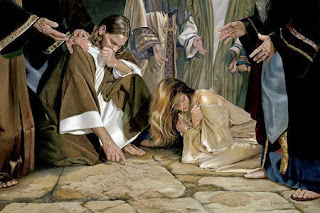 man thought his wife guilty of adultery, he could bring her to the priest for judgment. The priest would scoop up dust from the Temple floor, mix it with holy water and make her drink it. If her stomach bloated, she was guilty. If it didn't, she was innocent. Did the Pharisees perhaps think Jesus was going to put this judgment into motion? Did the adulterous woman think she would have to drink the concoction and be proven guilty? She knew she was guilty. Instead he began to write something, and I believe it was the names of those ready to stone the woman to death because of her sin. I believe He wrote those men's names and the women with whom they had committed adultery.