Last month, I shared about silver mining in southwestern Colorado and how some mines produced coins uniquely marked and traceable back to that specific mine. This month, it's a discovery of gold in the Colorado Rockies in the mid-1800s and the Colorado Gold Rush of 1859. 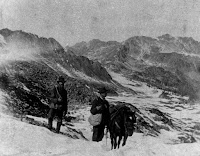 Nearly everyone has heard of the "famous 49ers" and the California Gold Rush. No less significant is the "Pikes Peak or Bust" slogan and the Colorado Gold Rush of 1859. I first heard of this through the TV show, Dr. Quinn Medicine Woman, in the 1990s. Once I moved here in 2007, I did more research as part of the building of my Colorado history folders. Who knows where all this research will enter my books, but you can bet it will. :)

As far back as 1835, a French trapper discovered gold in the area, but after taking it back to New Mexico for examination, he forgot where had found the gold and failed at leading anyone else back there. A critical lapse in memory caused the gold rush in Colorado to occur a decade *after* the famous rush in California. Makes me wonder what would have happened with the USA had the rush occured in Colorado first. Of course, what gold some found failed to impress those with visions of unlimited wealth in California, so it might not have changed anything. Still can't help but wonder!

Once the thrill of the California rush waned, folks started heading back home. Rumors of the gold in the Rockies led several parties to journey to what is today known as Denver and surrounding suburbs. By 1860, Denver City, Golden City, and Boulder City were substantial towns serving the mines. Today, the "city" has been dropped, and those cities are Denver, Golden, and Boulder. The rapid population growth led to the creation of the Colorado Territory in 1861.

The Pike's Peak Gold Rush sent everyone into a frenzy. Anyone who could afford it packed up their belongings and headed out to Colorado. They gathered their supplies, wagons, mules, mining equipment, anything they could think of to sustain them when they arrived at their destination. As soon as the spring of 1859 came around, people were in a race to get to Pike's Peak. That's where the "Pikes Peak or Bust" slogan originated. Some even painted it on the sides of their wagons!

Colorado produced 150,000 ounces of gold in 1861 and 225,000 troy ounces in 1862, leading Congress to establish the Denver Mint, which is one of only two mints in the US today. You can see which mint produced the coins in your wallet or pocket by looking for a "D" or a "P" on them.

Have you ever packed up everything and headed away from all you've known in search of something potentially bigger? What was it? Was it worth it?

If you had lived during the time of the gold rush frenzy, would you have joined the thousands of others heading west in search of gold? Why or why not?

She lives with her husband and fellow author, Stuart Vaughn Stockton, in Colorado. They have one girl and one boy, a Retriever mix named Roxie and and Australian cattle dog named Timber. She has sold seventeen (17) books so far and is represented by agent Sandra Bishop of the TransAtlantic Agency. You can also find her on Facebook, Twitter, and Pinterest.
Posted by Tiffany Amber Stockton at 1:00 AM