Last month, I shared about mining in Colorado, along with the Colorado Gold Rush and how it led to the establishment of the Denver Mint, mirroring the Philadelphia Mint and giving this country coins with either a P or a D stamped into them. This month, it's a tour through the historic forts of Colorado.

As westward expansion became prevalent, the wild lands of Colorado begged for a piece of civilization to be established, helping those who had journeyed west to find the supplies--and sometimes another human being--they needed. Although none of these are still active military forts today, they hold a great deal of significance in the history of this state.

I don't know about you, but the photos included with this post send my imagination back to the day when these forts were active and thriving. As you click on the larger views, see if you can picture the horses hitched to posts, or the movements of trappers and cavalry men within the walls of the forts. 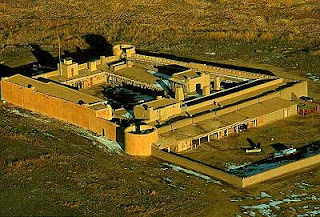 If you're traveling on the Santa Fe Trail National Scenic and Historic Byway, don't miss one of Colorado's must-see attractions: a stop at Bent's Old Fort National Historic Site near La Junta. Built in 1833 by William and Charles Bent and their partner, Ceran St. Vrain, the original trading post was a conduit of commerce for people living on the plains of the region. It had enough sleeping rooms to house up to 200 people, and it quickly became a center for cultural interaction between American settlers, Mexicans and Plains Indians. In fact, the Bent brothers made great strides to maintain good relations with the Arapaho, Kiowa, and Cheyenne Indians who hunted on the land around the fort. 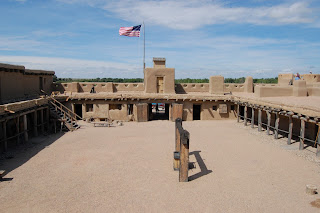 In 1835, William Bent married Mis-stan-sta or Owl Woman, the daughter of White Thunder, a holy man among the Cheyenne people. Their marriage helped bridge the two cultures and maintain peace between them.

Today, you can stroll among the extensive network of rooms and corridors and visualize what life was like in an old trading post. The fort was reconstructed in 1976 and is made of adobe, an efficient building material used in the dry climates of the West. Employees at the fort dress in period clothing and encourage you to ask any questions you might have about the area's past. My family will be venturing there this summer and turning it into a homeschool visit for the kids. :)

Watch Ute Indian dancers clad in buckskin and other traditional garb engage in traditional dances in Delta. Every summer, Fort Uncompahgre — a military fort turned living history museum — hosts Thunder Mountain Lives Tonight. In addition to the dances, interpreters are on hand to demonstrate and explain the how and why of pioneer fur trapping, hide tanning and even arrowhead making. Throughout the rest of the year, visitors are encouraged to take a self-guided tour to learn about fort life and the lucrative and dangerous business of fur trapping. Before its life as an interpretive museum, Fort Uncompahgre stood as a staging point for United States soldiers who stood against American Indian attacks on white fur trappers in western Colorado. 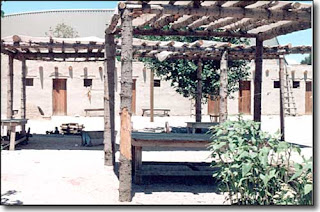 See the lives and livelihoods of the white settlers and American Indians of the area chronicled at the El Pueblo History Museum in Pueblo. Once a fort, a great amount of goods came through El Pueblo’s doors in the mid to late 1800s. It served as a sanctuary for a number of well-to-do traders who built their incomes by trading with the Ute and Apache Indians in the area. The demise of the fort came at the hands of the same tribes with which they traded. Angered over the rampant spread of disease and encroachment on their land, a band of Ute and Apache warriors stormed the fort and captured or killed many of its inhabitants. The fort was abandoned shortly thereafter, and years later, other settlers built over it. Now, thanks largely to the efforts of a local historian, parts of the old fort have been reclaimed from the earth, and a history museum sits near the fort’s original site, featuring painstakingly replicated sections of the original fort. 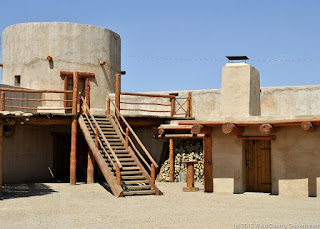 Learn the inner workings of the Fort Vasquez fur-trading post found just north of Denver, near Greeley in Platteville. Louis Vasquez (the fort’s namesake) was a trapper in the early 1880s who made his living bartering furs from the Cheyenne and Arapaho Indians in return for food and shot. A reconstructed fort stands almost exactly where the original was built. And now, you can tour the replica fort, as well as the museum and visitor center, also located on site. Unlike other trading posts of the era, Fort Vasquez did not succumb to American Indian attack or fold due to extreme hardship. Instead, it was abandoned in the late 19th century due to the declining demand for its main commodity — beaver pelt. 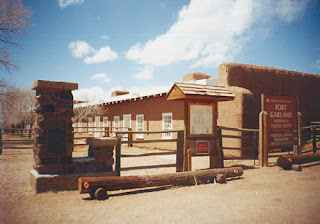 In the 1800s, increased settler protection became a priority. Fort Garland, built in 1858, was constructed in direct response to this need. With an infantry and cavalry unit — each with up to 100 soldiers — it protected new settlers in the San Luis Valley against resistant Ute Indians, who had made their traditional home there for centuries. Over its life, the fort drew distinguished soldiers, including storied frontiersman Kit Carson. Even fabled Buffalo Soldiers (black troops assigned to the Western Frontier after the Civil War) were stationed there during the fort’s tenure. A Congressional Medal of Honor recipient was among the ranks of the black soldiers stationed there. Today, it has been rebuilt as a living museum. Along with learning the history of this military fort, you can also view Hispanic folk art on display. And don't forget to take a self-guided tour through one of the most interesting parts of the fort: The Commandant’s Quarters, a replica of the room used by Kit Carson. 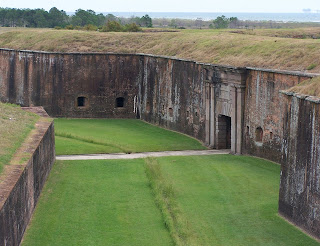 Constructed in 1865 a half mile from the South Platte River on a strategic tract of land know as Morgan Flats, Fort Morgan gave a commanding view of the entire river valley, as well as the north side of the South Platte River. As the only army presence between Julesburg to the east and the populated regions of the Rockies in the west, it was the United States’ largest organized armed presence for miles. While the fort no longer stands, you can tour the Fort Morgan Museum for military- and area-related history.

Have you ever visited a historic army post anywhere in the US? Where was it?

Is there an army post or fort near where you live that is still in existence today? In other words, it's an active fort or military post that hasn't been turned into a living history museum?

If you were to have lived in the areas where these forts were constructed, what do you imagine your role would have been?

She lives with her husband and fellow author, Stuart Vaughn Stockton, in Colorado. They have one girl and one boy, a Retriever mix named Roxie and and Australian cattle dog named Timber. She has sold seventeen (17) books so far. You can also find her on Facebook, Twitter, and Pinterest.
Posted by Tiffany Amber Stockton at 12:00 AM