Our favorite Mexican restaurant in Pagosa Springs does a cute fold with their napkins. The fan may be paper, but it lends an air of elegance.
When I was growing up, napkins were cotton and I hated it when mom hauled them out for company meals. I was the one who had to iron them. I learned to cut and hem-stitch napkins in home economics class. I must have been absent on the day the teacher said to pre-wash the fabric. The napkins mom insisted on using were my not-square-cut, lope-sided linen ones. Why? She said the hem stitching was beautiful, well-executed. I looked at the tiny even stitches, but couldn't see beyond the imperfections of the whole napkin.

I vowed to use paper napkins when I married. I wanted to put them on my bride's registry list. Guess who nixed that one.

The first documented method to clean soiled fingers after a meal is attributed to the Spartans of ancient Greece, who used a Apomagdalia - a small piece of dough rolled and kneaded between the hands. It was thrown to the dogs as the guest left the table.

The Sudarium, credited to the Romans as the ancestor to the first cloth napkin as we know it, was a small cloth similar to a handkerchief used to wipe ones brow. Mappas, made of fine silks and linens embroidered with gold and woven with color, were brought to the host table to carry leftovers for the journey home.

Napkins became common in the sixteenth century. They were very rarely washed, so folks used a personalized napkin ring to distinguish their dirty linen from their dinner guests.

A Surnappe was a long towel given to the guest of honor. Other guests used a communal bath-sized towel brought around by a servant.

The Lord of the Manor had the Portpayne, a folded, decorative napkin. It held the bread and knife. It was folded to the left of the plate with the open end facing the lord. Still done in today's table etiquette.

On July 9, 1887 Englishman John Dickinson, a stationery manufacturer in west Hertfordshire, England used paper napkins for his annual company dinner? Called serviettes, they were used in the August 9, 1902 coronation of Edward VII. 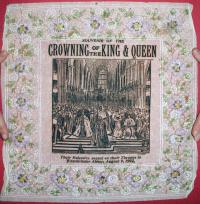 In 1931, Scott Paper was the first American company to market paper napkins. However, they didn't become a popular household item until the 1950s. It's said that currently the average person uses six paper napkins daily. Project Gutenberg has an interesting document From Paper-mill to Pressroom by William Bond Wheelwright at http://www.gutenberg.org/files/47959/47959-0.txt


A cloth napkin is called a Serviette in the United Kingdom, Ireland, some parts of Canada, Australia, New Zealand, and South Africa. However, in Australia and New Zealand Serviette generally means a paper variety and napkin is cloth. Canada used the same distinction until the early 1980s, but now rarely uses the term Serviette.

It was the wedding and anniversary gifts of place mats and matching cloth napkins that turned the tide for me. Now I collect them from places we travel. They must be natural fiber not synthetic. Yes, I used cloth placemats and quality paper napkins at every meal.

Thus began my love affair with the art of napery (folding napkins). I searched library shelves and haunted half-priced and second-hand stores for old books on the art of napkin folding. I was surprised at the number of booklets in antique stores for brides and party planners with equally antique dates that gave examples and how-to instructions.

The Practical Guide to Napkins and Napkin Folding by Rick Beech was a marvelous find. So was the ten methods of folding Serviette in Mrs. Beeton's 1861 Book of Household Management plus her 1923 Beeton's Napkin Folding Illustrations. Her folds are still used in catering today.

Visit https://www.youtube.com/watch?v=KJozU0h5lao for a demonstration of the Rose and Star from Mrs. Beeton's book. Although the example of the two below look complicated, they're very easy. 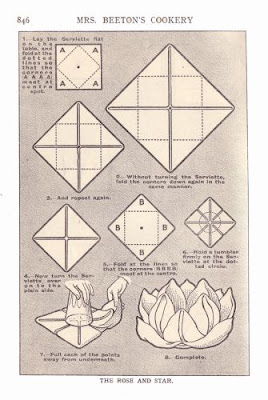 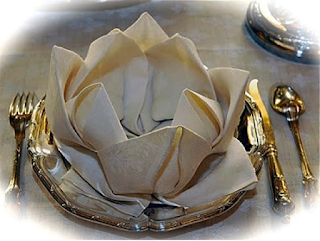 Sometimes called Water Lily, check out instructions for the red one at
http://www.fold-a-napkin.com/186/all_napkins/water-lily-fold/
or watch
https://www.youtube.com/watch?v=ol5UDxPoyM4 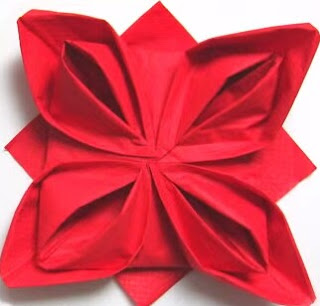 You can do a simple triple fold as a silverware holder. Visit the tutorial:
http://delightfulwoman.com/napkin-fold-tutorials-for-an-amazing-table-setting/ 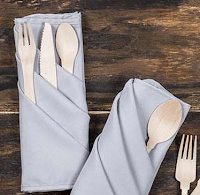 Or you can do a delightful rose in a glass. 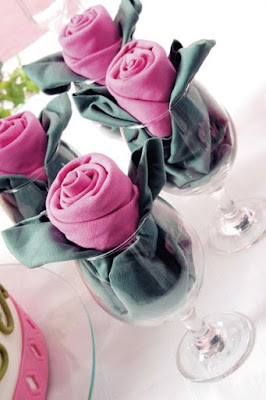 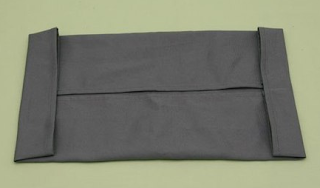 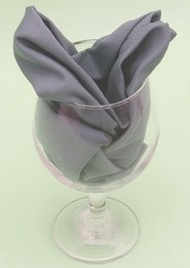 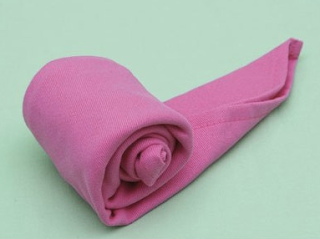 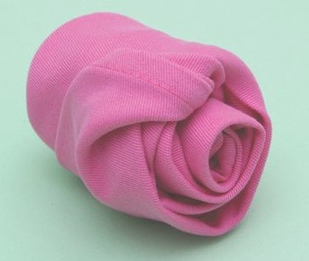 One of my favorites is from the Marie-Antoinette table at the ©Court of Versailles, France. 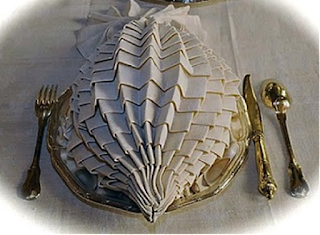 Various folders have different names for the same fold. For example, the Bird of Paradise is also called the Shell, the Sail Boat, and the Cock Crest. Some refer to the art of napery as origami, the Japanese art of folding paper into shapes of birds, animals, etc.

If you feel you must iron while you fold, try the Dinner Jacket napkin at
https://www.youtube.com/watch?v=hNOuC7BwWmg

Or finger press a cute shirt with a ribbon tie
https://www.youtube.com/watch?v=pXdGmopfta8

At https://www.youtube.com/watch?v=uikE-w_eDnY, a delightful gentleman, Luigi Spotorno, author of Luigi's Language of Napkin Folding (2006) shows how to fold a two-color Dinner Jacket. Put his name in YouTube and you'll get a nice array of his demonstrations.

Since the early 1980s, napkin folding has fallen victim to hygiene, saving water, and unfriendly detergents. This is an declining art that without practice or training our grandchildren will set an uninspired, unimaginative table.

Wouldn't napkin folding be a great skill for children's restless hands? This would be a great home school project.

Do you fold your crisp, maybe even starched, cloth napkins into fun decorations for special occasions?