I first learned of Jane Long when I studied Texas History in elementary school. Her story always fascinated me because she did so much on her own and made a success of her life even when tragedy struck her with the loss of two baby girls and her husband. 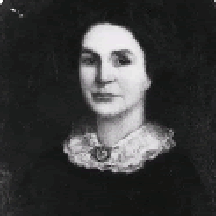 Although she was not born in Texas, Jane Wilkinson Long became known as the “Mother of Texas.” Her story is one of courage, resilience, and tenacity in the face of tragedy and makes the honor well-deserved.

Born on July 23, 1798 in Charles County, Maryland, her childhood was one of tragedy. Her father died when Jane was less than a year old. Her mother stayed there with Jane until 1811 when they moved to Mississippi Territory where Jane’s older sister lived. When her mother died in 1812, Jane went to live with her sister.

In early 1815 she met a physician, James Long, who had come to Natchez to practice medicine. They married in May, 1815 just a month or so before Jane’s seventeenth birthday. In November of 1816, their first child, Ann, was born.

In 1819, after the birth of her daughter Rebecca, she set out to follow her husband to Texas where he hoped to help Texas win freedom from Spanish rule. She fell ill on the way and stopped in Louisiana where she left her daughters in safety so she could join her husband in Nacogdoches, Texas. Before they could return to Louisiana to claim their daughters, Rebecca died.

In 1820 the young family moved to Bolivar Point near Galveston, Texas. There they established an outpost in an effort to help free Texas from Spanish rule. In 1821, James left on an excursion to Mexico. Jane was expecting another child, so she stayed behind and vowed to remain there until James returned.

James was captured and killed in Mexico City, but Jane did not know this. Throughout 1821 and 1822, she stayed even as others left and supplies ran out. She, a twelve year old servant Kian, and her six year old daughter Anne survived on dwindling supplies of corn meal, salted fish and oysters from the bay. Her ingenuity in keeping the fort safe by giving the illusion of it still being occupied by soldiers protected her and her child from Indians in the area. On a freezing December night, alone with only her daughter and the servant girl, Jane gave birth to her daughter, Mary James Long. They were finally rescued a few months later in March.

Jane settled in Fort Bend County, but then Mary died at the age of two. Undaunted, Jane stayed and was offered a land grant by Stephen F. Austin as a part of Austin’s colony. In 1832 she purchased an inn in Brazoria. With the help of Ann and Kian, she turned the inn into a place where prominent leaders of the Texas Revolution met to discuss politics. In 1835 she honored Stephen Austin with a dinner and ball after his release from eighteen months in a Mexican prison. Five years later she opened another inn and developed her land grant into a very prosperous plantation. By 1861 she owned more than 2,000 acres. 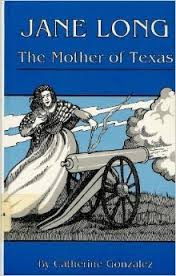 Although many well known men, such as Mirabeau B. Lamar and Stephen Austin,  became suitors, she rejected all offers of matrimony and died a widow of James Long in December of 1880. Jane was not actually the first English speaking woman to give birth in Texas, but her unwavering devotion to the state and her tenacity to succeed earned her the title “Mother of Texas.”

Many books have been written about her and you will find schools all over Texas named in her honor. Houston has a Jane Long Middle School that opened
in 1957. 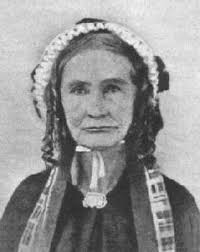 School children have drawn pictures of her and other Texas heroes through the years. This picture of her in her last years shows the ravages of time and circumstances on her 82 year old face. 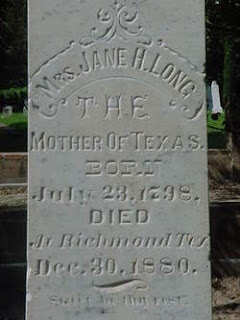 She is buried in Richmond, Texas in Fort Bend County with this simple headstone. 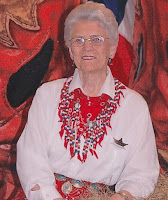