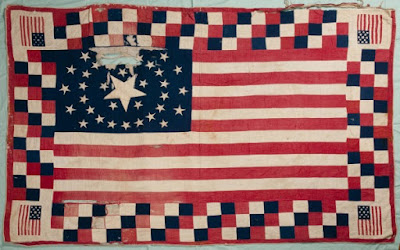 In June of 1864, twenty three unmarried members of the Ladies Aid Society of the First Church of Belfast, Maine began work on a flag quilt to honor the Maine soldiers who fought for Union during the Civil War. Larger than a standard cot-sized quilt issued by the Sanitary Commission, this 62" x 92" inspirational quilt was stitched with the thought of inspiring hope and displaying appreciation, especially for the sick and wounded soldiers convalescing at the Armory Square Hospital in Washington, D.C.

The Ladies Aid Society of Belfast was formed in 1861 after Fort Sumter fell to Confederate troops and patriotic fervor swept through the area. While men enlisted and fought such battles as Antietam, Fredericksburg, Gettysburg, Spotsylvania Courthouse, Cold Harbor the society ladies sewed blue denim pants, flannel shirts, and colored handkerchiefs for their local soldiers. Stitching began on their new project quilt on June 17 and was completed by July 7th.

The signature style quilt had symbolic messages, puns, and autographs penned in ink on many of the pieces of fabric. Of the 34 stars displayed on the blue canton, the large white star in its center contains the Lord's Prayer and each of the five points contains a biblical verse drawn from either the old or new testaments. The smaller stars surrounding it represent a battle or campaign in which Belfast soldiers took part. 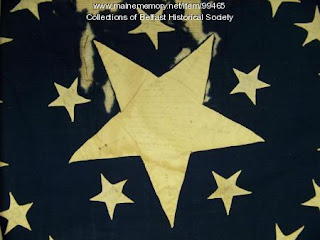 Here is a sampling of some of the sayings penned on the quilt:


“Here’s success to the boys, whoever they are
That have shouldered their muskets and gone to war
Victorious They’ll be, defeated they can’t
While they are led into battle by U.S. Grant”
By Augusta Quimby

"The noisy Bird, the Northern Parrott"

“If the rebs won’t pay, We will charge em”

"What Soldiers Cannot Be Surprised? Those on Guard."

"The boys of our army, The flag of our country,
The soldiers of Freedom, and the Red White and Blue
On land and on sea, be they ever victorious
And each to the other forever prove true."

"Freemen to arms! Your country's cause in this dark hour demands your aid, God's blessing on the hand that draws in her defence a patriots blade."
By Marianne Furber


One of lady quilters, Augusta Quimby, wrote in her 1917 Recollections of the Civil War "that the quilt was finished during the afternoon, and was displayed in the dining room and was much admired.” Augusta remembered that “A picnic supper was served, to which the young men were invited.” The following week the Belfast Civil War Soldier's Quilt was sent to Ward 26 of the Armory Square Hospital in Washington, D.C.


The quilt was received on August 12th and was acknowledged with appreciation on behalf of the hospital by a Miss McClellan who wrote:

“The quilt has been exhibited to each one in the ward, and many have been the expressions of surprise and admiration which it has called forth, as it has been spread before the eyes of those who are suffering from this devotion to the flag which it represents.”

Who knows how many soldiers had been encouraged by the Belfast flag quilt at the Armory Square Hospital by the time the war concluded. But as the war ended, the hospital closed and came into the possession of chief surgeon Dr. D. Willard Bliss. In 187  his daughter married a man who was appointed Special Indian Agent in the Dakota and Montana territories. It remained in the family until in a remarkable circumstance of fate, or providence, it was found amongst an estate in 2011.


The quilt was salvaged and upon inspection, the date and location of its makers and origin was discovered on the top stripes: U. S. G. Society, Belfast, Maine, June 17, 1864. Nearly 150 ears after it had left on its mission, the quilt was returned to Maine in care of the Belfast Historical Society. Of the 250,000 quilts stitched for the Union army during the Civil War, only about twenty still exist.

GIVEAWAY! In honor of the liberty that inspired the ladies who created this beautiful flag quilt ~ I'm giving away a copy of my quilt themed novel, set in the years leading up to the American Revolution. One commenter will win Pattern for Romance!!


What is one way YOU show your patriotism?

Honour Metcalf's quilting needlework is admired by a wealthy customer of the Boston Mantua-maker for whom she works. In need of increasing her earnings, she agrees to create an elaborate white work bridal quilt for the dowager's niece. A beautiful design emerges as she carefully stitches the intricate patterns and she begins to dream of fashioning a wedding quilt of her own. When Honour is falsely accused of thievery and finds herself in a perilous position, merchant tailor Joshua Sutton comes to her aid. As he risks his relationships, reputation, and livelihood to prove her innocence, the two discover a grander plan.

New Englander Carla Olson Gade writes from her home amidst the rustic landscapes of Maine. With seven books in print, she enjoys bringing her tales to life with historically authentic settings and characters. An avid reader, amateur genealogist, photographer, and house plan hobbyist, Carla's great love (next to her family) is historical research. Though you might find her tromping around an abandoned homestead, an old fort, or interviewing a docent at an historical museum, it's easier to connect with her on her blog, Adventures of the Heart.
Posted by Carla Gade at 1:00 AM