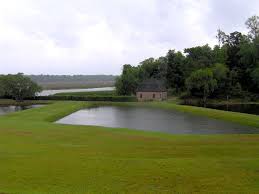 To conclude my series of three blogs about the Middleton Place near Charleston, South Carolina, I want to share what I learned about rice production.


When I think of “rice” I think of Asia.  I had no idea rice was a huge crop on plantations.  It was introduced to Middleton Place in the 1690’s.  The Middletons did not have the knowledge, but the slaves they purchased from West Africa did.  These slaves were sought after in America and brought a higher price.  In slave-auction advertisements, such slaves were specifically mentioned. With the help of these slaves rice production in Middleton Place expanded and was perfected. In 1698 the plantation exported 12,000 pound of rice, but that amount grew to 18 million pounds in 1730 and 83 million in 1770! 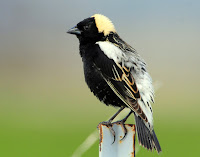 Rice was planted in March to mid-April.  The planting and harvesting was determined by the migration of bobolink (also called “rice birds”).  If the rice was  planted the rice too soon or harvested too late, these birds would eat up the seed and the plants.  I enjoy the thought that knowledge was gained by observation of nature.


When rice was first introduced to the plantation, they had to clear the land (removing the timber) and adjust the soil to make each field flat. Unlike other crops that can be planted in hilly conditions, for rice production it was very important to have level fields. The fields would be flooded, and they needed the water level to be constant.
Once the fields were prepared, they were hoed into furrows 10” a part.  The women were responsible for the actual planting.  They put seeds in a hole made by their big toe, and covered over it with their heel or a hoe.  Each slave woman planted ½ acre a day. Obviously they walked barefoot and it was often muddy, with mosquitos and even alligators in the ponds and along the Ashley River.  My husband and I saw several, just lounging on the grass by the ponds!

Once the seeds were planted the flooding began. The Middletons found that they couldn’t use the water of the Ashley River because it was too brackish.  Considering the plantation was right on the river this was unfortunate.  But again, they learned from observation and mistakes. They flooded the fields using wooded trunk gates, allowing water in from inland reservoirs.  The used water was eventually be let out into the river. 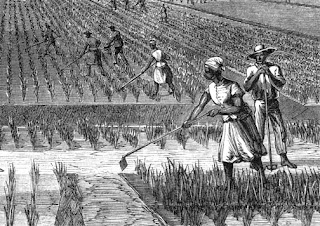 The crops were flooded three times.  The First Flooding was called the “Sprout Flow” and lasted six days to let the seeds germinate. Once that was accomplished the water was drained out and the field was kept as dry as possible so the seeds could grow.


When sprouts could be seen from 50 yards away it was time for Second Flooding, called the “Stretch Flow” because it was allowing the plants to stretch.  This flooding lasted for 3-6 days, completely submerging the plants in order to kill off the grasses and drown the bugs.
Then came forty days of dry growing.  During this time the fields would need to be hoed to get rid of weeds and aerate the soil. The fields were marked into ½ acre parcels so each women knew the extent of her responsibilities.

The Third Flooding was called the “Long Flooding” or “Harvest Flow”.  This time water was allowed into the fields a little at a time, which gave the plants support to stand upright as they developed their tassels.

Harvest time was between September and November. The plants were cut off at ground level with rice hooks (hand scythes) and left on the stubble to dry.  Once dry, they were gathered into sheaves and taken to a processing area.

The next step was also accomplished by the women.  The Threshing separated the rice from the stalks and was done by beating the sheaves with a flail. 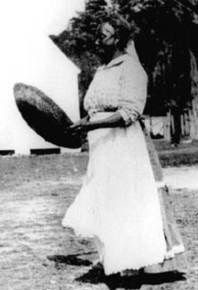 Then the rice was “fanned” in low edged flat baskets, with the women tossing it slightly into the wind, allowing the chaff to blow away. I remember seeing pictures from Biblical times of this kind of fanning.


At this point, this rough rice could be sold but was not edible yet as each kernel still had the husks on it. 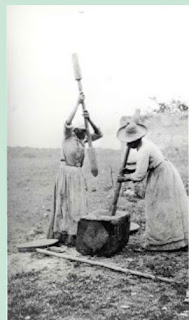 To remove the kernel, the women put the rough rice into a large mortar (a low barrel) and beat it with a pestle.  This took off the husk, and created brown rice.  But to be shipped to Europe, the oily bran covering (the nutritious part) had to be taken off.  I’m not sure why.  Perhaps the oily bran would rot on the long trip to Europe?  The bran was beaten and fanned again to polish the rice. The flat end of the pestle was used for getting the husks off, a rounded end for polishing the kernels—a method used in Africa. Again, they were fanned, then packed in barrels made by coopers at Middleton Place, and shipped down the Ashley River and then to Europe.

By the late 1700’s there were mechanical threshing and pounding machines that were water-powered and then steam-powered. These mechanical innovations obviously made it possible to cut back on the manual labor.

After harvesting, the fields had to be refinished while they were dry. The stubble was burned and plowed under which added nutrients to the soil. They used oxen and horses to pull the plows. This was the only time animals could be used because while the rice was growing the fields were never dry enough for the weight of animals and regular plows. Again, it was important that the fields were kept totally level so when they were flooded the water was even.  This prep-work took until spring when it was time to plant again. 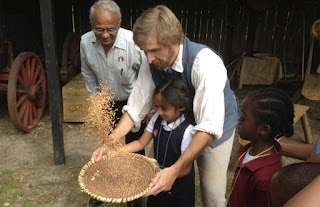 None of this could have been achieved without the knowledge and work of slaves.  After the Civil War, with the abolition of slave labor, rice production ceased.


Middleton Place offers a tour where you can learn about the rice production, and at certain times, participate. I highly recommend a long visit to this fascinating historical plantation. 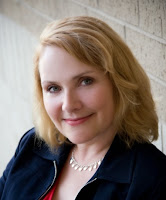 NANCY MOSER is the best-selling author of 25 novels, including Love of the Summerfields, Christy Award winner, Time Lottery; Washington’s Lady, Mozart’s Sister, The Journey of Josephine Cain, and Masquerade. Nancy has been married for forty years—to the same man. They have three grown children and five grandchildren, and live in the Midwest. She’s earned a degree in architecture; run a business with her husband; traveled extensively in Europe; and has performed in various theatres and choirs. She knits voraciously, kills all her houseplants, and can wire an electrical fixture without getting shocked. She is a fan of anything antique—humans included. Author Website, Footnotes from History Blog, Author Blog/Inspirational humor, Pinterest, Facebook, Twitter, Good Reads

Read my latest book Love of the Summerfields: 1880 England. The lives and loves of manor and village intertwine. Earl and shopkeeper, countess and clerk—all will be stunned and transformed by a secret that begs to be revealed. When the Weston family returns to Summerfield Manor at the close of the London social season, both village and manor relax into their normal existence. But for four women, turmoil awaits. Each must battle the restrictions of her position as her faith and character are tested. Each will have a choice to make between her own happiness and a truth that will turn their carefully-ordered world upside down.