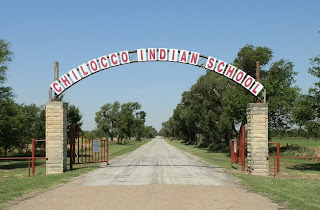 The Chilocco Indian School was an agricultural school for native American children. It was located about 20 miles from Ponca City, Oklahoma. The school opened in 1884 but didn't close until 1980. The name "Chilocco" is derived from a Muscogee word for big deer or horse.

In 1862, Congress authorized the creation of five non-reservation boarding schools in Pennsylvania, Kansas, Oregon, Washington, and Oklahoma. The Cherokee tribe in Oklahoma Territory provided 8,640 acres of land in the Cherokee Strip to help the agricultural school meet its mandate for agricultural education. 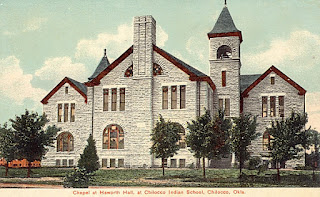 The school provided academic and vocational education for American Indian students of all Indian tribes, but it focused on the vocational element. Chilocco's objective was to integrate and assimilate American Indians into mainstream American life. The school had a highly structured and strict military regime until the 1930's, when reforms were made to make the school less regimented. Former students remember "twenty-two bugle calls a day, government-issued uniforms, and inadequate meals and healthcare." They also remember the bonds of loyalty and love that knit students togethers, and the rivalries of tribe, age, and language differences that cross-cut school society. The school was a home and haven to some and a prison to others.

A 1928 expose of federal Indian Service mismanagement scathingly critiqued conditions in the boarding schools, including Chilocco. When reforms were introduced in the 1930s, boys and girls could sit together in the dining rooms, more attention was invested in academic work, and drudgery labor devoted to school upkeep was cut back. Nonetheless, many aspects of student life endured: separation from home and family for years at a time, devotion to fellow students, and strict discipline. 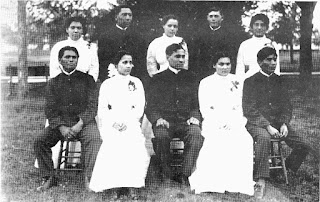 Vocation at Chilocco was heavily entrenched in the curriculum. The thought was that the Indian students would have a better chance of leading useful and productive lives if they were taught how to live and how to provide for themselves rather than be educated as a white student in a public school. 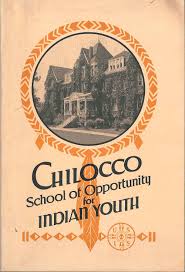 The story of Chilocco is one of bravery, heartache and perseverance. Chilocco is a monument to the hardships of the Native American people. It is a historic landmark and is apart of not only Native American’s history but ours as well. Chilocco was called “the light on the prairie”, Although its halls are dark and silent, it still shines as a part of many Native Americans. 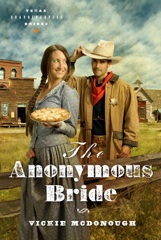 October Special! The Anonymous Bride is free on Kindle all month. It's the story of three mail-order brides who come to a Texas town, each expecting to marry the marshal--but he never ordered a bride. Find out what happens to the women whose hopes are quickly dashed. The sequels, Second Chance Brides and Finally a Bride are on sale for just 99 cents! What a deal!

Bestselling author Vickie McDonough grew up wanting to marry a rancher, but instead married a computer geek who is scared of horses. She now lives out her dreams penning fictional romance stories about ranchers, cowboys, lawmen, and others living in the Old West. Vickie is an award-winning author of 38 published books and novellas. Her novels include the fun and feisty Texas Boardinghouse Brides series, and End of the Trail, which was the OWFI 2013 Best Fiction Novel winner. Whispers on the Prairie was a Romantic Times Recommended Inspirational Book for July 2013. Song of the Prairie won the 2015 Inspirational Readers Choice Award. Her latest series, Land Rush Dreams, focuses on the Oklahoma land runs.