From Boos to Beaus: Scaring Up a Little Romance

Halloween wasn’t always scary. An effort was made during the Victorian era to turn the holiday into more of a family affair. Some hostesses went a step further and many of the tricks and treats featured at Victorian Halloween parties were designed with romance in mind
In the Old West Halloween dances were held in schoolhouses, barns or churches.  Guests were required to jump over a broom upon arrival to assure future happiness.  Masquerade balls were popular, too, but were mostly held in the east. 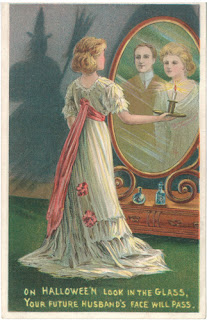 Apples played an important part in those early Halloween rituals but so did tin soldiers.  An article in the El Paso Daily paper in 1899 described the ritual of melting tin soldiers.  A young woman would drip melted tin from a spoon into cold water. The tin would harden in all manner of shapes, thus foretelling a maiden’s future.  If, for example, the tin looked like a shoe, she would marry a shoemaker.  A ship meant her future husband would be a sailor and a hammer foretold a dashing (handsome?) carpenter in her future.
Bobbing for apples was a must, but with an interesting twist. The apples each contained the name of a male guest.  A woman lucky enough to sink her teeth into a pippin would come up with more than just a wet face; she’d also know the name of her future mate. 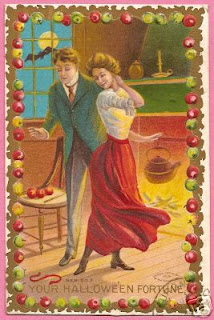 Some enterprising hostesses who owned apple trees went one step further.  While the fruit was still green they glued the initials of single males onto the apples.  When the apples ripened, the paper was washed off revealing the green initials on the rosy cheeks.   Upon arriving at the party, female guests would draw an apple from the tub to find out the name of her dance partner.
Another popular game involving apples required careful paring so that the peels were cut into one long strip. These were then thrown over the left shoulder.  The initial the peel made on the floor was the initial of a future love.
Peelings were also hung from barn doors and female guests given a number. If for example you got number two, then the second male through the door was your true love. 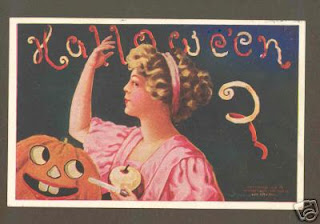 Another crowd pleaser was the cobweb game.  Guests were each given two bright colored threads attached to a cardboard heart in some remote corner. The threads ran through the room in an intricate pattern. The idea was to unravel your thread by bobbing under a red thread or slipping through a tangle of green or blue threads until you reached the cardboard heart which named your partner for the night.
Halloween games also included the game of Proposal.  Each woman was given a stack of cardboard hearts and lemons.  The males had to go around the room and propose to each woman. He had thirty seconds to convince her to marry him. When the bell rang she would either give him a lemon for no or a heart for yes.  At the end of the game, the man with the most hearts won.
With all the ghosts and goblins of today it’s hard to imagine a time when Halloween was just another word for romance.

I never liked Halloween, even as a child.  It's too dark for me. What about you?  Are you a Halloween person?
He's a Texas Ranger and she just shot him!
Margaret's story: The Nutcracker Bride 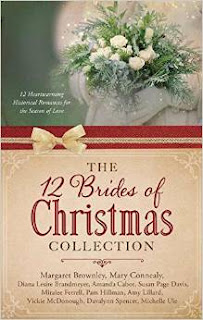 All twelve stories can be published singularly or together.
Amazon