Adolph Sutro--King of the Comstock

Within a handful of years after the California Gold Rush started, it peaked and waned. Many who had staked everything to find their fortunes in California’s gold fields lost everything instead. In order to get back on better footing, they wandered farther afield, hoping to find a new vein of ore. A few of the lucky ones did—in Virginia City, Nevada.
At first, the prospectors were focused on gold. However, as they dug deeper into the ground, they found a layer of rich black sand, black manganese mixed with a blue-gray quartz. Upon testing the strange sand, they found it was three parts silver to one part gold. One of the original people to lay claim to this strange sand was Henry T.P. Comstock. And so began silver mining in America. The discovery became known as the Comstock Lode.

The silver was buried in the ground or in the mountainsides, so it had to be dug out. Thankfully, the consistency was such that it could be easily dug out with a shovel at first. But as these miners had to dig deeper and deeper, several problems arose. Cave-ins were one such problem. The soil was too soft, and many lost their lives as the surrounding ground gave way. To combat that problem, a German mining engineer created a special timber support system called Square Set Timbering to strengthen the mine shafts.
Another problem was that the mine would fill with water, making it difficult and costly to continue the mining process. At first, large pumps were employed to pump the water up to the shaft openings and out of the mine. But this was very cost prohibitive and time consuming.

A Prussian-born engineer by the name of Adolph Sutro proposed an answer to this issue. Build a horizontal tunnel through which the water could flow out of the mine on its own. Said tunnel would also provide other benefits, in that it would help to vent the poisonous gasses that often built up in underground mines, and it would provide a lower-cost method to remove the ore and transport miners in and out of the mine. Construction of the tunnel began on October 19, 1869.

While the tunnel presented many positive reasons to proceed, some of the mine bigwigs feared that Sutro would use the tunnel to his own benefit in order to take control of the entire Comstock Lode. Sutro struggled to find the monetary backing to proceed with the project until he was finally able to secure a loan from a London bank.

During the construction phase, Sutro was known to work right alongside those he hired as tunnel diggers. He faced the same avalanches, mudslides, and poisonous gasses that his diggers faced, and he often was the first one in and last one out of the tunnel they were constructing. The tunnel was completed in 1878, nearly nine years after it began, and it cost a whopping $5 million to complete. (To put that in some context, that would be $119,047,619.05 in today’s dollars).

The Sutro Tunnel emptied nearly 4 million gallons of water a day from the mine. Sutro rented use of
the tunnel to the mine owners to the tune of about $10,000 a day. But by 1879, he realized that the richer parts of the mine were petering out, and they had to dig even deeper than his newly-completed tunnel. His profitability began to decline, so rather than hang on to the tunnel, he sold it at a great profit and moved to San Francisco as a very rich man. There, he became one of the city’s largest landowners, and he also served a few years as the city’s mayor.

Because of his work on the tunnel, as well as his great profit from it, Sutro became known as the King of the Comstock. 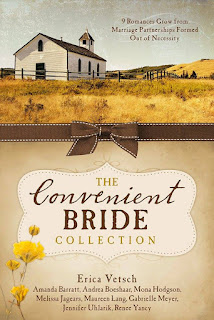 Join nine brides of convenience on their adventures in a variety of times and settings gone by—from a ranch in California…to the rugged mountains of Colorado…to a steamship on the Mississippi…to the dangerous excitement of the Oregon Trail…into high society of New York City. No matter the time or place, the convenient brides proceed with what must be done, taking nuptials out of necessity. . .and never dreaming that God might take their feeble attempts to secure their futures and turn them into true love stories for His glory.
Posted by Jennifer Uhlarik at 1:00 AM